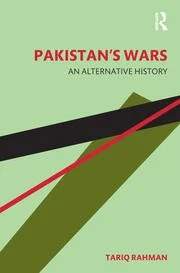 for the book launch of

About the Speaker: Tariq Rahman has two doctoral degrees: Ph.D (1985) and D.Litt (2014) from the University of Sheffield. He has published eight books, over 60 articles and several book reviews. He was the first Pakistani to be honored by one of Germany’s highest awards for academic research called the Humboldt Research Award. The President of Pakistan conferred upon him the Pride of Performance in 2004 and the Sitara-i-Imtiaz in 2013. He is a Salzburg Seminar fellow (2017), a member of the Common Room at Wolfson College, University of Oxford,a visiting fellow of Pakistan Institute of Development Economics and has been the incumbent of the Pakistan Chair at the University of California, Berkeley and a visiting professor at the University of Aarhus, Denmark and the Peace University in Castellon, Spain. He retired as Director of the National Institute of Pakistan Studies at QAU and is now Dean of the School of Social Sciences at the Beaconhouse National University, Lahore.

His area of expertise is in linguistics and English Literature. His research has focused on the linguistic history of the languages of the Muslims of Pakistan and north India including Urdu-Hindi and English. His publications span issues of education and politics, language and culture, and Pakistani literature to name a few. His writing includes both works of fiction and non-fiction.