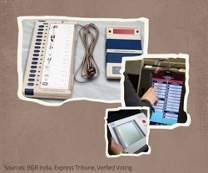 On November 17, 2021, the Pakistani parliament passed the Elections (Second Amendment) Bill, 2021, allowing the use of Electronic Voting Machines (EVMs) in the 2023 elections. It passed with a narrow margin of just 18 votes (Mehboob, 2021). 221 members supported the Bill in the joint parliamentary session while 203 opposed it, indicating a sharp divide and lack of consensus building across the bench.

EVMs primarily record votes in computer memory and employ a digital interface to cast votes. A voter typically chooses their option from a touch screen, and the data is stored in 1s and 0s to be automatically tallied later. EVMs sharply divide public opinion worldwide, with its proponents arguing for their relative security, reliability, accessibility, and efficiency. Critics of EVMs point out their cost, unsustainable maintenance requirements, and vulnerability to hacking and other forms of tampering.

In a report presented on September 7, 2021, the Election Commission of Pakistan (ECP) raised thirty-seven   objections to  EVMs, which ranged from lack of ballot secrecy, security, transparency, adequate pilot testing to their limited ability to prevent rigging,  and election fraud (Butt, 2021). The ECP decided to carry out a pilot project of using EVMs in Punjab during the March 2022 local elections, (“ECP to use”, 2021), and simultaneously formed three committees on November 23 to recommend technologies in the electoral process, changes to existing electoral laws, and storage practices (Virk, 2021). However, as of April 2022, the local government elections were delayed in Punjab due to legislative technicalities (Sheikh, 2022). The logistic and governance challenges, accompanied by a lack of consensus over the EVM bill, cultivate inefficient, if any, implementation of the Bill.

EVMs are currently used by 28 countries in politically binding national elections, while 17 countries utilize them for politically-binding sub-national elections (International Institute for Democracy and Electoral Assistance). As also evidenced by the ECP report, some countries stopped using EVMs e.g., Ireland, Paraguay, and Germany while others tested them out and decided against using them due to security concerns e.g., Indonesia and Norway. However, there is little third-party research drawing parallels between these countries and Pakistan, and therefore, lacking a much-needed holistic projection of  EVM performance in Pakistan.

Thus, this article analyses the experience and performance of EVMs in a few of these countries to gauge the practices that discouraged or encouraged voter trust in this technology. A democracy is only as good as the amount of trust in the validity of the cast vote.

Which machine is used?

Like most countries using EVMs, Pakistan, too, will employ Direct-Recording Electronic (DRE) voting machines- a machine on which the voter makes the ballot choice directly by choosing an option on a touch screen without first marking a paper ballot, which is then stored in a memory card. Additionally, a Voter Verified Paper Audit Trail (VVPAT) is used which is another security measure, printing a mirror paper ballot that is stored in a box. The electronic record of the vote is the primary source for the count. The paper trail functions as an alternative record of the cast votes and can be used to detect possible election fraud or machine malfunction, and provides a means to audit the stored electronic results. Political parties, or the election commission, can demand a simultaneous recount of the paper ballots to verify the EVM results. However, it is pertinent to note that the manual recount of the paper ballots is labor-intensive and expensive.

DRE-specific challenges should be contextualized within the economic, social and political structures of developing countries. Many rural areas already experience electricity shortages: transporting, housing the EVMs in ideal temperature, providing external power sources for the EVMs are large additional costs. Keeping all these challenges in mind, the ECP has predicted the 2023 elections to be the most expensive in Pakistani history: with an estimated cost of Rs. 424 billion, they will cost the federal government roughly a 1000 times more than the last three elections (Gishkori, 2021).

The need and implications of simple design

India has been using EVMs since 1982: due to many shared demographic, cultural, economic, and social contexts, analyzing the use of EVMs in India provides meaningful insights. Similar to India, a significant portion of Pakistan’s population is illiterate- 40 percent (Abbasi, 2021)- while as many as 58 percent of children cannot read a sentence in Urdu or their regional language (Junaidi, 2012); despite increasing digital natives, access to internet remains limited (Kemp, 2022). This demographic insight is reflected in the design of the machine: both manufacture a simplified design to avoid voter intimidation (Wolchock et al., 2010). There are recorded instances (Wolchock et al., 2010) of the largely illiterate voter base avoiding polling stations due to the perceived inconvenience of navigating the technology- albeit non-generalisable, this external variable further endangers the low voter turnout, and therefore, weakens an integral pillar of democracy.

Another reason for prioritizing simpler designs framed citizens’ knowledge of the voting process as a question of security. The more informed the voter is the lesser likelihood of the process being hijacked, or them being misled. This technological intervention further mystifies the voting process, and so, to circumvent that, both Pakistani and Indian EVMs employ a simple button and ample reliance on symbols rather than letters within the design.

Traditional scholarship on EVMs suggests that simpler designs are more secure (Hao and Ryan, 2020; Krimmer et al., 2019; Sastry, 1970) since it’s easier for non-specialized teams to detect tampering, and harder to disguise any abnormality. Since the government staff also lacks widespread knowledge, and expertise in EVMs, the simpler design enhances their capacity to detect tampering. The scholarship recommends that the Trusted Computing Base (TCB) i.e. the hardware and software responsible for enforcing system-wide information security protocol, should be smaller and simpler.

However, Wolchock 2et al. (2010) independent analysis of a procured Indian DRE machine revealed otherwise. They proved that the relatively simpler interface made it easier for an attacker to read and write over the memory chip, or to substitute an electrically-compatible dishonest main board within the original one. The simpler design makes it possible to manufacture such a keyboard and to replace it efficiently. India has recurrently reported election irregularities involving the machines. In the 2009 parliamentary elections, EVMs malfunctioned in more than 15 parliamentary constituencies across the country, including but not limited to attacks on the cable connecting the ballot and control unit which openly tampered with the candidate the vote would go to (Rao, 2010).

Despite such obvious signs of vote tampering, there has never been a prosecution related to EVM fraud or a post-election audit to attempt to understand the causes. This, perhaps, signifies the primary importance of external accountability infrastructure in evaluating the security of EVMs. Therefore, the importance of transparency is underscored in machine design-the lack of transparency doesn’t necessarily have to be borne out of malicious intentions but also derives from the nature of the technology.

The choice to opt for locally produced EVMs, in comparison with independent multinational companies with greater experience and expertise, is important for several reasons. The multinational producers serve as an external accountability mechanism, since they are incentivized  to point out electoral fraud to maintain credibility. Their reputation as providers of secure and transparent EVMs is essential in curating and maintaining trust with all clients and expanding their business. They have a strong incentive to avoid the design of their EVMs being questioned.

Venezuela, which shares Pakistan’s history of voter distrust in election results, experienced a different outcome concerning electoral fraud due to the EVMs being provided by the multinational company, Smartmatic. Venezuela has employed VVPAT-equipped DRE EVM machines since 1998 and since 2004, Smartmatic has been providing technology and support services for EVMs. The company, which otherwise provides voting technology to at least 12 other countries, alleged that a million votes were manipulated in the 2017 Constituent Assembly elections. Smartmatic made this knowledge public, taking care to highlight that even though such large-scale fraud would’ve existed in manual elections too, it might’ve gone unnoticed in the absence of electronic security and auditing safeguards. Even though the election results weren’t overturned, Venezuela’s example underscores the key role played by multinational providers of EVMs in actualizing the comparatively more efficient safeguards offered by the technology. Without third-party multinational EVM providers, verifiable and statistical data on vote manipulation would not have been made publicly available.

In order to evaluate favorable  political, social, demographic, and economic contexts for EVM’s potential to increase voter trust, it is also essential to explore countries that were able to effectively harness its many argued benefits and safeguards. Brazil is one such country. Comparatively, it has higher voter satisfaction with EVMs (Martin and Brasil, 2007). After being partially used in national elections in 1998, DRE EVMs have been the only voting method since 2000. The auditing process has cultivated trust within the voters, especially the parallel voting test.

On the eve of the election, authorities randomly select a few EVMs and publicize the entire process of political parties carrying out a mock election via them. When juxtaposed with the inaccessibility of the voting data, publicizing any audit was key to creating acceptance as it built trust in the technology. With access to data, citizens don’t have to rely on the institution or political candidates’ testimonies- they can personally verify all claims. Therefore, rather than only relying on technological safeguards, the relevant parties and government departments employ additional steps to cultivate that trust. They don’t view security as a static prerequisite  in-built within the machine, but rather as a process dependent on the behavior  of external actors. Trust cannot be built via machine design, but is rather dependent on the credibility of external institutions, and their willingness to adopt other transparency measures. When compared with Pakistan’s lack of consensus building within the parties over the EVM amendment, this insight becomes relevant in its scope and importance.

EVMs, like other technologies, do not inherently carry benefits. They need to be evaluated within specific contexts. Per contextual comparisons with India, Venezuela and Brazil, it is evident that effective deployment of EVMs hinges on confronting the security risks of simpler designs. Simpler designs are essential to build voter trust within the largely illiterate voter-base, but simultaneously poses security risks. Effective and long-term trust within EVMs is also dependent on institutionalizing third-party accountability mechanisms and centring additional consensus-building efforts by political parties. Therefore,  this article not only roots EVM experience within the social, political and demographic context of its invention, design and deployment but also underscores its dynamic nature.

In light of Imran Khan being ousted from government by a vote of no confidence in April 2022, the use of EVMs seems unlikely in the near future. The EVM bill was decisively passed and overwhelmingly opposed by the opposition parties, and therefore, was Pakistan Tehreek-e-Insaaf’s pet project. However, they currently remain a legislative part of the elections in 2023. Regardless of the bill being potentially scrapped, exploring EVM’s multifaceted impacts remains important since the technology can be adopted anytime in the future.

Ajwah Nadeem is a MPhil student at the Centre for Public Policy and Governance, and is a research intern at FACES Pakistan. Her research interests include feminism, local and digital governance.

Gishkori, Z. (2021, December 16). 2023 elections to be most expensive in Pakistan’s history with use of EVMs: report. Geo News. https://www.geo.tv/latest/387941-2023-elections-to-be-most-expensive-in-pakistans-history-with-use-of-electronic-voting

International Institute for Democracy and Electoral Assistance. (n.d.). Is E-Voting currently used in any elections with EMB participation?. Retrieved March 22, 2022, from https://www.idea.int/data-tools/question-view/742