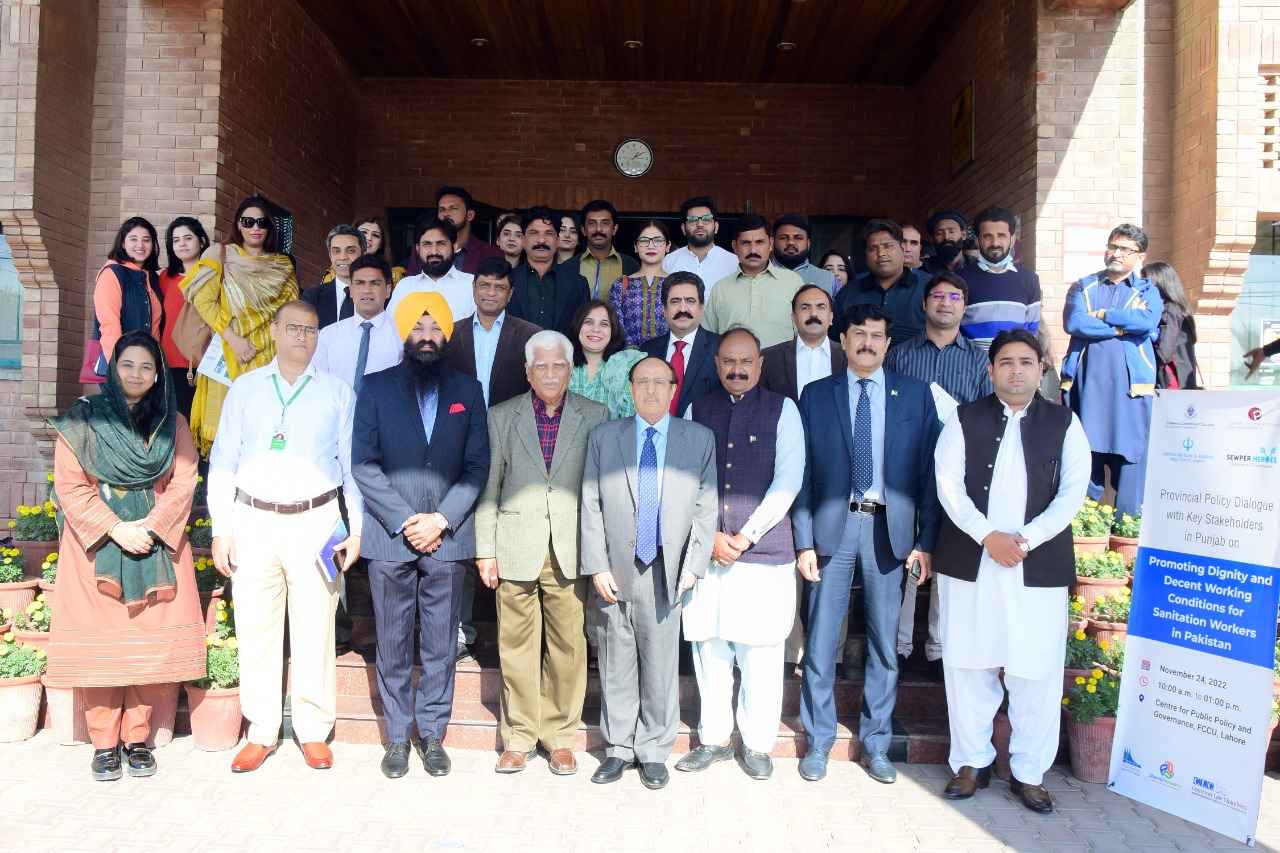 On the 24th of November 2022, CPPG hosted a policy dialogue on ‘Promoting Dignity and Decent Working Conditions for Sanitation Workers in Pakistan’ in collaboration with the Centre for Law and Justice. The event was organised by Ms. Mary Gill and Mr. Asif Aqeel.

Sanitation work in South Asia is considered dangerous and unclean, reserved for the people thought to be born in “untouchable” castes. In Pakistan, the vocation is often associated with non-Muslims. Sanitation workers are locally known by several titles, including sweeper, sanitary worker, sewerman, khakrobs, kundiman, and gutterman. But, disparagingly, they are called “Chuhra.” Though these workers perform their job privately, our focus is on the workers who directly work with the government, a public sector entity, or a private contractor hired by the government—these workers clean government buildings and public places like parks, roads, and streets.

This Policy Dialogue relates to an earlier study titled Shame and Stigma in Sanitation, published in 2019 which found that sanitation work is life-threatening, dangerous, unhygienic, low-paying, and unproductive regarding financial gains.

The Policy Dialogue gave various stakeholders from Punjab a chance to voice their concerns and deliberate on the changes needed to improve and safeguard the humans and labor rights of these workers. Sanitation Workers are exposed to hazardous working conditions and regularly get injured during work. Sometimes, they die during work while opening clogged sewer lines or in road accidents. This is mainly for two reasons: first, the workers are not provided safety equipment, and second, there is lack of proper training and associated safety protocols are not adopted. Furthermore, no record of injuries and deaths is kept. Several workers die in a manhole while rescuing their coworkers who fall unconscious due to poisonous gases. But no rescue training and equipment are available to these workers.

When a worker refuses, he is threatened with termination or suspension. The daily wage worker’s employment status complicates the redressal of grievances in case of death during work or for receiving a pension after the completion of the service. Third-party contracts are a resistant layer between their permanent employment and a daily wage worker’s legal status.

The working conditions severely compromise the health of these workers; skin and respiratory diseases are for example rampant among workers. Additionally, they do not receive medical attention if they get injured. In other words, their lives and health are not safeguarded by the state and society. Government departments such as 1122, WASA or waste management companies are responsible for providing quality equipment and services to their workers in addition to the requisite training. Moreover they are responsible for building a narrative of decent and dignified work, which so far they have been unable to do, particularly with respect to sanitation workers from minority communities.

During the Policy Dialogue participants agreed that greater public sector accountability was necessary to improve the situation. A deep rooted culture of discrimination and classism prevents sanitation workers to live and work with dignity and in a safe environment. Without an equitable enforcement of labor and human rights in Pakistan, we will continue to fail its people and witness serious consequences to the progress of our human development. In addition to transformations in the way the relevant departments work, complementary legal and legislative services need to be in place that help promote and secure the rights of these workers.

The relevant data and statistics need to be recorded so that the policy response can be built on evidence.