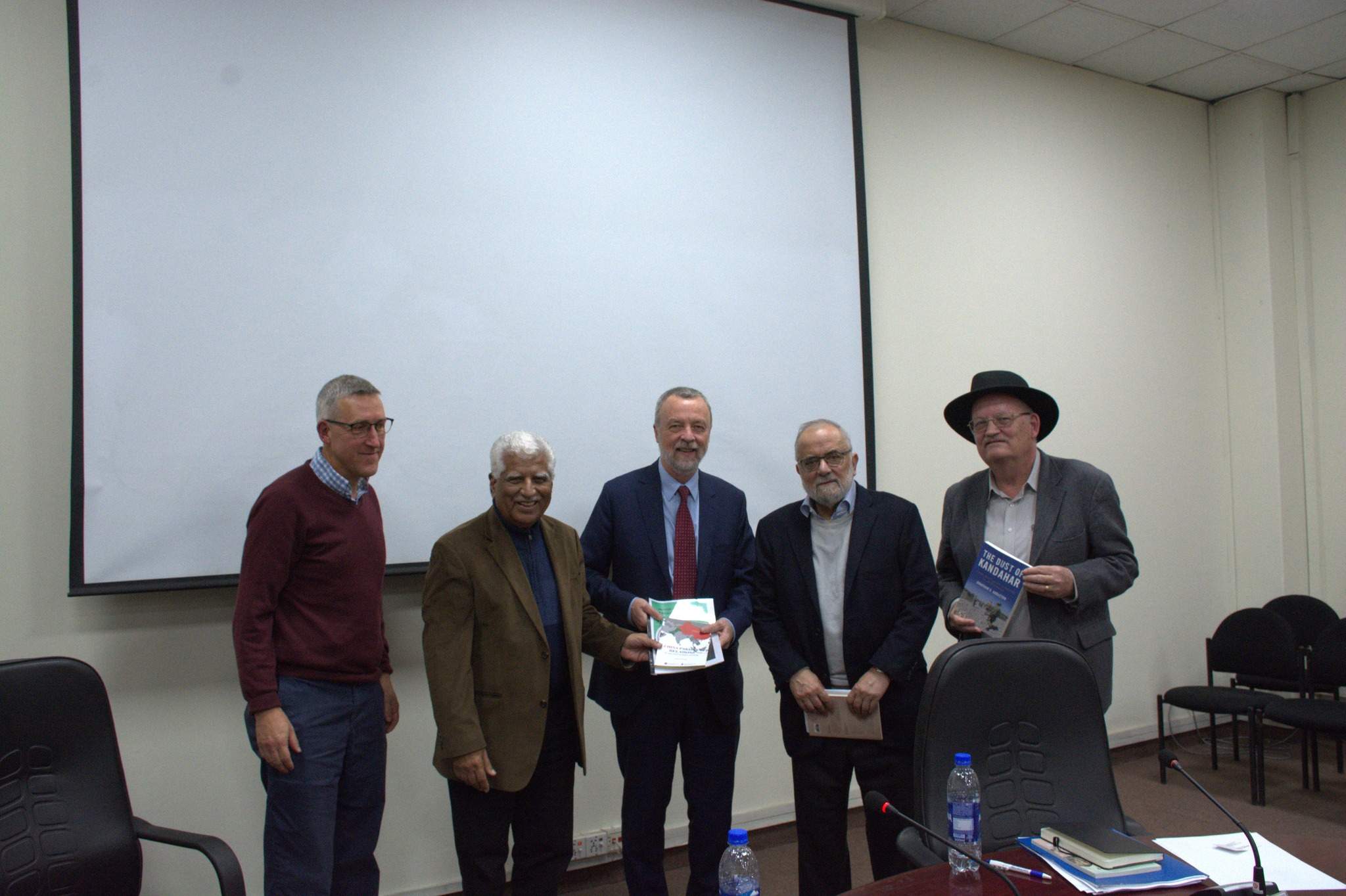 The Centre for Public Policy and Governance, FCCU organized a roundtable discussion on ‘Afghanistan: Missed opportunities to achieve peace’. Dr. Saeed Shafqat, Professor and Founding Director, CPPG moderated the panel discussion. Dr.Andrew Wilder and Mr. Ahmed Rashid were the panelists for the event. Dr. Shafqat initiated the debate about the potential missed opportunities in Afghanistan, a war-torn country since its genesis and a land that has tempted many dominant powers.

Andrew Wilder is a Vice President of Asia program at the United States Institute of Peace (USIP). The US Congress founded the Institute about 40 years ago to prevent, mitigate, and resolve violent conflicts internationally. He is the author of The Pakistani Voter: Electoral Politics and Voting Behavior in the Punjab and has written numerous other publications. His recent research has focused on electoral politics in Afghanistan, and the effectiveness of aid in promoting stabilization objectives in Afghanistan and Pakistan. He also teaches a course on Afghanistan at Yale University.

Mr. Rashid has been covering the wars in Afghanistan and conflicts in Central Asia and Pakistan since 1979. He writes for several newspapers and magazines including BBC Online, the New York Times, The Financial Times, the New York Review of Books, and Spain’s El Mundo. He is a member of the Advisory Board of Eurasia Net of the Soros Foundation, a scholar of the Davos World Economic Forum and a member of the Advisory Committee of the Asia division for Human Rights Watch.

In response to the question about the potential missed opportunities in Afghanistan to achieve peace that could have prevented a lot of loss of lives and suffering, Dr. Wilder expressed his opinion that not inviting the Taliban at the ‘Bonn agreement’ was an early missed opportunity. As said by Lakhdar Brahimi, the special representative to the UN, the original sin in Afghanistan was not inviting the Taliban to participate in the Bonn agreement. This was the time when the United States of America was at the point of great influence. The United States in a very short order defeated the Taliban in a matter of weeks. By the end of 2002, there were a total of 500 U.S. personnel, either CIA or special forces, in Afghanistan. That was the time when the Taliban were actually defeated, which would have been a great time to invite them at the peace negotiation table.

He further added that it was not politically realistic that after the 9/11 attack, president Bush, with all his anger and desire to seek revenge on the Taliban, could so soon invite them for peace negotiation. Another mistake was to consider the Taliban as synonymous with al-Qaeda. Needless to say, the Taliban leadership did give safe havens to al-Qaeda in Afghanistan.

Following this reason, there were legitimate reasons why the U.S. felt the Taliban needed to pay for their actions. Besides, these groups are perceived to be terrorists by the majority of Americans. Therefore, this opportunity was quite unrealistic and difficult to achieve. Given the fact that some of the defeated Taliban leaders were being raided and harassed by the old warlords who had then become part of the government, gave birth to new insurgency and forced them to migrate to Pakistan. This was another missed opportunity, which could have been used to achieve peace through the reintegration of some of the former Taliban leadership into the subsequent political dispensation. In addition, institutional factors, especially institutional and bureaucratic inertia, and lack of institutional memory played a major role and thus had been significant within the U.S. policy making process. The reluctance of organizations contributed to the failure of the huge U.S. support and advisory efforts to generate an adequate response to the challenges faced, particularly in terms of institution building in Afghanistan.

Addressing the efforts of the United States to establish a people-friendly government in Afghanistan, Dr. Wilder stressed that the U.S. paid a heavy price for the next 20 years to achieve short-term goals. The corrupt and predatory government in Afghanistan contributed to the de- legitimacy of the Islamic Republic in Afghanistan that further fueled insurgency. Despite the fact that there were some efforts and back channel discussions to have talks about the peace negotiations in Afghanistan, the peace process never really and was never taken seriously, both during the Bush administration and the Obama administration.

It was during the Trump administration’s 2017 South Asia strategy when for the first time there was a clear articulation that America’s military objective in Afghanistan was to help achieve a political objective, whereas that was never the case before. A few weeks later, he announced the desire to pull out all troops from Afghanistan, which seriously undermined the negotiating hand of Ambassador Khalilzad, who was assigned the task to move the peace process forward. The Biden administration more or less took the strategy forward. President Biden decided to withdraw troops from Afghanistan. Dr. Wilder concluded that we should invest in conflict prevention and resolution. It’s much more effective than fighting wars.

Mr. Ahmed Rashid shed light on what led to the failure of America in Afghanistan. Lack of historical perspective by NATO and American forces, the inability to understand the functioning of Afghan society, the mistake of ordering early elections, and the failure to mediate a peace agreement with the help of a third party could have played a major role in stabilizing the situation. According to him, one of the reasons why U.S. policies failed so badly in many parts of the world is because of the lack of historical and cultural perspective. As far as Afghanistan is concerned, both America and the Soviet Union wanted to employ their political philosophy in Afghanistan: they wanted to educate girls, encourage business, and build economics. But they ignored the ground reality in Afghanistan; Afghanistan is not an industrialized country, rather it is an agricultural country. There was a very little study of what would work in Afghanistan. For instance, America was adamant that elections should be held in a war-torn Afghanistan as early as possible and thy assumed that an enemy (Taliban) would want to sit and negotiate with them. In short, the political model America tried to impose on Afghanistan was a huge mistake Conversely the Soviet withdrawal was more effective because they invited the United Nations to
come in as a neural party and facilitate the transition.

Comparing the current Taliban with the Taliban back in the 1990s, Ahmed Rashid maintained that the Taliban are becoming less and less pragmatic. The Taliban are not learning from their past mistakes. The whole point of the Doha Agreement was that Taliban would take the responsibility to make sure that no terrorist groups would be allowed to function outside Afghanistan and practices such as public executions and flogging would be discontinued—which they did not uphold.

Ahmad Rashid sees American failure in the context of the fact that there has been no serious effort to mediate with the Taliban. Therefore, we need major diplomatic efforts, not only by the American but also some neutral organizations such as the United Nations. The peace process failed because America tried to monopolize it. It is important in any peace process to allow the neutrals to mediate solutions rather than trying to impose one’s own solutions.

The session ended followed by a detailed Q&A session that allowed the participants to express their reservations and concerns pertaining to the Afghan issue. Many commented on the interventionist ideologies of American policymakers that is costly, in terms of human lives lost, the economy and society at large. Not only do Americans at home suffer, but there are serious repercussions for other communities such as the Pakistani society worldwide.

Others raised concerns about American policies in Pakistan and its long-term objectives for the region—would the United States learn from its past failures and change its hard-power tactics? Some audience members assessed the Chinese model of influence, one that relies on economic investments and whether that will be a more successful form of building international, diplomatic ties? The BRI is a case in point, where the Chinese are building a narrative of ‘mutual gains’ and ‘shared development.’

The event was very successful; it generated enthusiastic discussion and exchange of ideas, which the speakers and audience members thoroughly enjoyed.