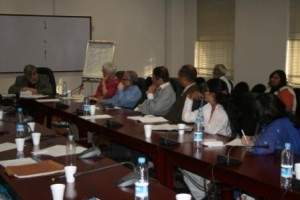 Dr.Charles Kennedy, Professor at Wake Forest University, has been involved in teaching and research for over 30 years. He has written extensively about South Asian political and governmental systems since 1975 and has conducted field research in Pakistan, Bangladesh, and India.  He served as the Director of the American Institute of Pakistan Studies from 1988-2001; and was the institute’s Secretary from 1982-1988. He has also served as the Coordinator of WFU’s Middle East and South Asia Interdisciplinary Program since its founding in 2005 His most recent books include: Government and Politics in South Asia (Westview Press, 2009), Pakistan: 2005(Oxford University Press, 2006), and Pakistan at the Millennium (Oxford University Press, 2003).His research interests include political Islam, US foreign policy with respect to the Middle East and South Asia, military regimes and constitutionalism in Pakistan and Bangladesh and Pakistani domestic politics. Venue of the seminar was E-002, Forman Christian College (A Chartered University), Lahore.