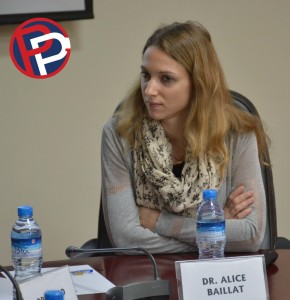 On December 6, 2018, Dr. Alice Baillat, Research Fellow at IRIS, Paris visited the CPPG to deliver a talk titled “Can vulnerable nations be weak climate leaders?” Dr. Baillat holds a PhD in Political Science and International Relations from Sciences Po Paris. She is a Specialist of the geopolitics of climate change and has also been teaching International Environmental Politics at Sciences Po Paris.

Dr. Baillat’s research deals with migratory and security consequences of climate change and international climate negotiations. Her articles and book chapters include L’Environment, a book edited by Francois Gemenne and published by Les Presses de Sciences Po in 2015. She has co-authored a book chapter on the framing of migration and security issues during the COP21 in the book Globalising the Climate.

During the seminar, Dr. Baillat presented her PhD Thesis, in which she focused on the case of Bangladesh, a ‘Weak Power’ Climate Leader. She stated that the reason to choose Bangladesh for her study was that it was a country extremely vulnerable to climate change yet also one of the most resilient. Her research attempted to explore how Bangladesh has gained comparative advantage in multilateral negotiations such as the United Nations Climate Change Conferences and has become an active player in the fight against climate change.

During her thesis work, Dr. Baillat looked at two primary questions, why weak parties negotiate with strong parties at multilateral levels, when they know the circumstance might not be in favor of them? And second, how weak/poor countries carry out these negotiations? Dr. Baillat’s analytical approach about such questions was that Bangladesh, due to its high risk of climatic disasters, is very adaptive to such situations. In addition, a country like Bangladesh, which is facing such harsh climate issues over the years, has developed mechanisms to mitigate and prepare for every such situation in future.

In the literature review of her research, she highlighted the role of developing countries in climate negotiations at the international level. According to her, only a handful of researchers are working on environmental and climate issues in South Asia. Moreover there is little policy prioritization on climate change amongst South Asian countries. This is one of the reasons, why there are less number of developing countries active on such negotiation forums. Pakistan too has just recently started considering climate change as a major development concern.
However, according to her concept of ‘weak power’, developing states do have the ability to use their vulnerability to raise awareness and force the developed nation to take stricter action on climate change. In order to exercise such power, these weak power states can take the help of NGOs, science experts, interest groups to formulate a strategy. Often they can use extremely emotive slogans and other forms of activism to demand change at international forums. One example of this can be of the Philippines, when representatives announced hunger strikes during the 2013 UN Climate talks in Poland. Such harsh forms of campaigning had a great impact, especially in terms of sensitizing larger more influential countries on the plight of the most vulnerable nations.

Dr. Baillat presented five determinates of Bangladesh as a weak power. First, it is recognized internationally as a vulnerable state, second it has First-mover advantage, third it has very good expertise within the south, forth it has moral leadership, and fifth Bangladesh has strategic coalitions.

Bangladesh has managed to garner international recognition through the media, its extreme poverty rates, and the diverse challenges people face as a result of climate changes.
Bangladeshis also have first mover advantage, meaning that due to the high risk of disasters, they have prepared themselves for harsh conditions since their Independence in the early 70s. They have strategically planned and built the right institutions to manage disasters and minimize risks.

Dr. Baillat also mentioned that as Bangladesh is a developing country, just like Pakistan and India, the risk of an unstable political situation, mismanagement of funds, and poor training are present, but it has still managed to gain funds to respond to climate change vulnerabilities. In short, there are several lessons to learn from Bangladesh when it comes to managing the effects of climate change. To conclude, Dr. Baillat also highlighted the importance of education, especially of university students on the risks of climate change and the need to conduct research on climate challenges and vulnerabilities that would then enable developing countries to have better expertise for such conditions and the ratio of negotiators at the multilateral level would be balanced as well.