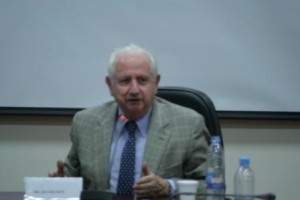 Distinguished Speaker: Ambassador Dennis Kux served 39 years in the US Foreign Service (1955-94). As a State Department South Asia specialist, Kux served in Pakistan (Karachi 1957-59, and Islamabad 1969-71) in India (1960-62) and was Country Director for India, Nepal and Sri Lanka (1973-77). Since retiring he has focused on writing and speaking about South Asia and is currently a Senior Scholar at the Woodrow Wilson Center in Washington, DC. Kux is the author of well received histories of U.S – India and U.S Pakistan relations by the name of India and the United States: Estranged Democracies, 1941-1991 and The United States and Pakistan: Disenchanted Allies, 1947 – 2000. He was Co Executive Director and principal drafter of the Council on Foreign Relations – Asia Society Report, New Priorities in South Asia: US Policy towards India, Pakistan and Afghanistan. Other work includes India – Pakistan Negotiations: Is Past still Prologue? Currently he is writing a second edition of Disenchanted Allies.

Kux returned to Pakistan in 1995-96 as a Fulbright Scholar and in 1998 as a Fellow of the American Institute of Pakistan Studies. He is a member of the Council on Foreign Relations and the American Academy of Diplomacy, and is the Vice President of the Nooristan Foundation, a US based charity that helps women and children in rural Afghanistan.