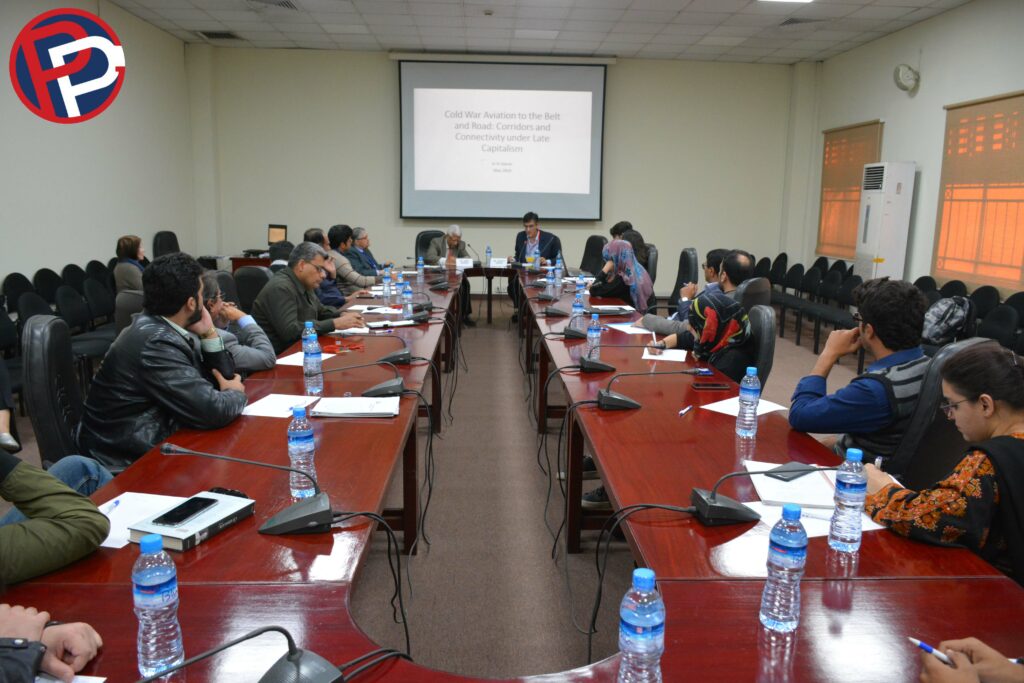 Home>Cold War Aviation to the Belt and Road: Corridors and Connectivity under Later Capitalism

Cold War Aviation to the Belt and Road: Corridors and Connectivity under Later Capitalism

On 3rd of December 2019, the CPPG invited Dr. Hasan Haider Karrar to speak on “Cold War Aviation to the Belt and Road: Corridors and Connectivity under Later Capitalism” Dr. Karrar is Associate Professor at the Department of Humanities & Social Sciences at the Lahore University of Management Sciences (LUMS). He obtained his PhD in East Asian Studies from McGill University. He has been Adjunct Faculty, Department of Global Studies, Department of History, Wilfrid Laurier University (Waterloo) 2007 – 2010.

Dr. Karrar began his talk by explaining that China’s Belt and Road Initiative (BRI) is one of the world’s largest infrastructure projects, with its potential political and economic impact being widely discussed since its inception in 2013. For his study he began with two questions; first where and when do we come across corridors before the BRI? Secondly, what else indicates Xi Jinping’s desire for global connectivity? He emphasized that the history of the specialized mobility for the corridors is important because history allows us to draw tentative conclusions about emerging global China. He mentioned that Xi Jinping’s speech on Sept. 7, 2013, at Kazakhstan’s Nazarbayev University about the traditional friendship between China and Kazakhstan sought to present China’s policy of good-neighborly and friendly cooperation with countries in Central Asia. The project has since evolved to become the One Belt One Road initiative and now the Belt and Road Initiative (BRI) with investments exceeding 1 trillion US$. Some analysts have argued the Belt and Road Initiative constitutes a natural extension of the infrastructure-driven economic development framework that has sustained the rapid economic growth of China. He illustrated that the BRI offers both a purpose driven global framework for directing Chinese FDI as well as the aesthetic processioning of the newest silk roads.

Dr. Karrar then argued that Jinping’s 2013 speech is reminiscent of George H. W. Bush’s speech that he made in the wake of 9/11 in 2001, announcing the Global War on Terror. Both commented on the need for vast mobilization, global financing, and the resources for war and logistics. Both speeches suggested the need to remake a new world order and a common theme of a ‘borderless world’ could be found in their rhetoric.

Going on to talk about the evolution of the BRI as commonly being marketed as a resurrection of the ancient silk routes, Dr. Karrar presented the maps of kartographers such as Ferdinand von Richthofen’s Silk Road (1877). These maps indicate mercantile routes that are transnational, connecting regions, markets, travelers and traders in seamless networks of economic, cultural and social exchanges. So the BRI is not a novel idea, it is building on existing infrastructure and connectivity models. According to Dr. Karrar, three examples can be given as anticedents to the BRI. The first are the 1990’s corridor investments by the Asian Development Bank (ADB). The ADB presents examples of successful application of corridor development approaches with an annual investment of $2 billion or more in regional cooperation and integration. This is a top-down funding mechanis. He declared that the late capitalism is a temporal framing marked by a shift from industrial capitalism to new levels of industrial automation and global finance. Many have called this an age of “history devoid of substance” or “an empty homogenous time.”

With the the ADB corridor investments, The Greater Mekong Sub region (GMS) constituted in 1992, was a successful model of sub-regional economic cooperation, designed to enhance economic relations among the countries. In 1998 The GMS is divided into three economic corridors: The North-South Economic Corridor, The Western Sub corridor, The Central Sub corridor. The GMS focused on upgrading physical infrastructure, enabling efficient movement between GMS states, enhancing development and alleviating poverty. It attempted to prioritise infrastructure planning, enabling connectivity and bridging the divided economic geography by stimulating export led growth.

The second example of an antecedent to the BRI were the transport corridors in the USA promoted in the 1950s and 60s. These meant to connect less developed regions by linking economic agents in the agriculture, residential and recreation industries. The third example according to Dr. Karrar were the Air Corridors managed by the US during the Berlin Blockade. Effective transport and logistical was given to provide the people of the West Berlin with supplie for aroun 323 days. These examples of corridors teach us the importance of forward planning and strategy. Therefore, the BRI is not just about economic connectivity and mobility but about technocracy, planning for the future and developing strategies. China’s insistence that it has a civilizational history that spans over 5000 years is also indicative of the deeper ideologies it has about its own role in today’s world order. China’s management of the Uyghur’s in Xinjiang is another pattern we cannot ignore.  He argued that the new Silk Road is not just about connectivity and trade, but it could be seen as a pedagogy of imperialism.

At the end of the session, different questions were asked by the audience. For example, can the CPEC and BRI be seen as a new form of imperialism? Will the CPEC be a game-changer for Pakistan? Dr. Karrar commented that it is too early to predict the end result of the CPEC however the people (locals) must be included in the projects-how they benefit is the real test for the CPEC. Others were interested to know what should small nations could do to avoid being caught in a debt trap. Dr. Karrar felt that it was all relative and and the terms of the AIDB will have to be seen in comparison with IMF, the world bank and other financial institutions. Other factors also impact this trend. Another question on whether the BRI could eventually operate on the same model as the European Union with a democratic form of governance to which Dr. Karrar responded that global trends emerge in very unpredictable ways. We do not know whether in 10 or 20 years the BRI will still be relevant, however it is unlikely that China will exercise a democratic form of governance with other BRI members.