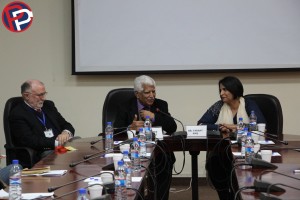 A seminar on American Foreign Policy in the age of Trump was held at the Centre For Public Policy and Governance, Forman Christian College (A Chartered University).

Dr. Farhat Haq holds a PhD in Political Science from Cornell University. Currently, she is Professor of Political Science at Monmouth College and a Visiting Professor at Lahore University of Management Sciences.  She received several NEH awards to engage in advanced studies on topics of Comparative Religions at Harvard University; Nationalism and Ethnic Politics at the University of Wisconsin at Madison; Islamic Origins at the University of Chicago and an Asian Values Debate at Columbia University. Dr. Haq received Burlington-Northern Award for Excellence in Teaching and the Fulbright teaching/research scholarship. During 2015 – 16, she was resident scholar at the Woodrow Wilson Center, Washington D.C.
Dr. Farhat Haq has published in the area of ethnic politics, gender and politics, Islam and Human Rights and militarism and motherhood. Currently, she is working on a manuscript entitled Sacralzing the State and Secularizing Sharia: Pakistan in a Comparative Perspective.