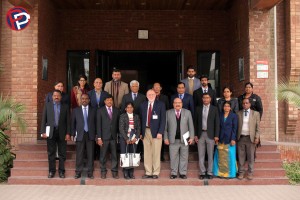 Dr. Shafqat opened his remarks by stating that the bureaucracy is imperative for governance, it’s an institution without which no government, democratic, authoritarian or dictatorship could function.  Public service is a calling and an embodiment of protecting and promoting citizen’s rights. That demands a professionally competent and merit driven bureaucracy.  With reference to evolution of bureaucracy in South Asia, he presented three perspectives:

1) Colonial rule was a modernizing rule and in that spirit bureaucracy palyed a pivotal role in running the colonial adminstration efficently and impartially. However, he argued the bureaucracy was not created to develop democracy but to act as a bridge between the colonial rulers and the people.

2) The colonial rule was exploitative and the bureaucracy was its instrument and helped the colonial ruler steal our resources and thus helped perpetuate inequality and underdevelopment.

3) The colonial rule was humiliating, it undermined our cultural values and sense of dignity and the bureaucracy helped the colonial ruler in subjugating the natives and injuring their sense of pride.

The intermeshing of these three tendencies have hampered the bureaucracy in most of the South Asian states, including Pakistan to transform into a modern institution that could serve the interests of the public.

Discussing the case of Pakistan, Dr. Shafqat observed that in South Asia, Pakistan is one country, where since 1950’s when we became an ally of the Unites States of America, reforms in the civil services were pushed. The US Harvard Advisory Group (HAG) played a critical role in advocating civil services reforms. Subequently, in 1971 the break up of Pakistan led to popular demands of reforming the bureaucracy. In 1973,the government of Prime Minister Zulfiqar Ali Bhutto however, introduced radical civil services reform— abolished the exclusivity of training for the CSP, Police and Foreign Service of Pakistan, creating Unified Pay Scales, and in haste launched the Common Training Program (CTP). The Program brought all 12 services together for eight months training; allocation of service was to be awarded after this training and a comprehensive examination. However, this scheme was resisted by bureaucracy and was abadoned after 5 CTP’s.

In the 1980s the Reagan/Thatcher era of international relations led to serious criticisms of the civil services and public sector, a liberalization wave took over and public-private partnerships began to emerge. ‘Public good’ began to lose value and crony capitalism became a reality through the help of the bureaucracy in many developing countries, including Pakistan.

In 2001, the Local Governance Ordinance was introduced to reduce the power of the bureaucracy, particularly that of the Pakistan Administrative Service (previously DMG) but the effect was the opposite and the PAS gained more strength. Later, in the aftermath of the events of 9/11, the civil service of Pakistan was affected by a ‘brain drain’ and many young and bright civil servants left the government to join INGOs or aid agencies and several got opportunities to go abroad for work.

Furthore more he pointed out whereas civil service is the life line of government in Pakistan, however, it became oblivious on such issues as high population growth rates and changing demographic patterns have added to the instability of the public sector and its capacity to respond to public service demand. The 18th Amendment to the Constitution has also revealed the under-preparedness of the provincial level of government and the confusion of division of responsibility between the federal government and its lower tiers—provincial and local.

Dr. Shafqat then added that it was important to realize the significance of technology in public administration, policy making was no longer following a strict vertical hierarchy as a result of digitization.

Dr. James Tebbe, Rector FC College, welcoming the Sri Lankan officers spoke about his positive experience with the Pakistani bureaucracy and how impressed he has been with the anti-terrorism departments, especially since the Peshawar School attack. He added that he was proud of his undergrad and grad students and that they were graduating as accomplished and competitive members of the workforce.

Both Dr. Shafqat and Dr. Tebbe expressed their delight at the Sri Lankan delegates’ visit and thanked the Rector, National Management College (NMC) and the Dean NIPP for taking the initiative to bring them to FCCU. They wished them an enjoyable and fruitful visit.