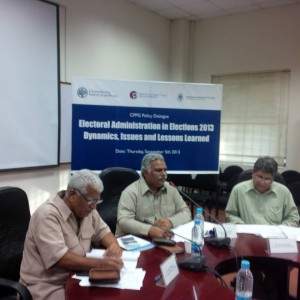 Mr. Abdul Waheed is Deputy Director Elections for the Election Commission of Pakistan. He was responsible for the administration of the General Elections, 2013. He has considerable experience with electio

Mr. Ejaz Chaudhry is the President of Punjab fn administration, having worked for the ECP since 2005. He also has experience with local government, having previously worked on local government elections in 2008.

or the Pakistan Tehreek-e-Insaf (PTI). He is a prominent Pakistani politician and social worker, and a civil engineer by profession. He has been involved with the PTI since 2007, before which he was a member of Jamaat-e-Islami for 35 years. He is currently organizing the PTI in Punjab, and also serves as a spokesperson for religious affairs for the party. He has also been instrumental in establishing the Insaf Students Federation (ISF) for the PTI.

Mr. Moayyed Jafri works as Correspondent Communication, Human Rights, Minorities and Indo-Pak Aman Ki Asha for The News International. He covered the General Elections 2008 and 2013 and filed various reports in this regards for The News International and other journals as well. He also hosts discussions over social/national issues at The Jang Forum. He assisted the Chief Minister’s Youth Mobilization Committee on the Smart Vote project and formulation of Provincial Youth Policy.