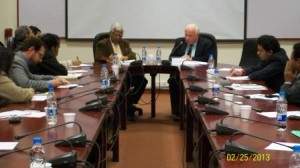 Home>Global History from an Islamic Angle

Global History from an Islamic Angle

Dr. Francis Robinson is Sultan of Oman Fellow, Oxford Centre for Islamic Studies and Visiting Professor in the History of the Islamic World, University of Oxford. He is also Professor of the History of South Asia at the University of London. He was lecturer in History (1973-85), Reader in History (1985-90) and Professor then Vice Principal and Senior Vice Principal (1997-2004), Royal Holloway College, University of London. Dr. Robinson was Visiting Professor University of Washington Seattle (1982, 1985 and 1986) and Directeur d’Etudes Associe, Ecole des Hautes Etudes en Sciences Sociales, Paris (1985). He was awarded the Iqbal Centenary Medal, Pakistan (1978) and the Shaikh Yaki Zamani Medal, Iqbal Academy, UK (2008). In 2006 he was appointed CBE for contributions to Higher Education and the History of Islam.