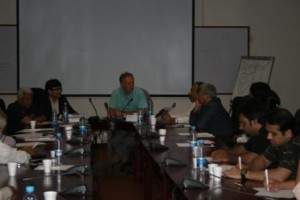 Dr. Michael Dawny Currently the Director for UK Collaborative Partnerships and European Projects at the Middlesex University, Dr.Michael Dawny has been working with the Middlesex University since 1994. He served as the Director, British Isles Region, during 2005-2009, as Head of European and Collaborative Programs during 1996-2000 and Head of Cultural and Media Studies from 1979-1994. His research interests include cultural representations of the future, new media forms and their cultural impact and cultures of global political economy. He has over a dozen publications and is the founding member of the editorial group, Radical Philosophy, the founding member and Chair, Association for Cultural Studies and Member, Editorial Board, Magazine of Cultural Studies.
Bilal Ahmad Butt Additional Secretary, (Planning) Higher Education, Government of Punjab. He holds a Masters in Development Management from London School of Economics. He has also served as Deputy Commission Gilgit (Gilgit Baltistan) & Vice Commissioner Punjab Social Security Institution.