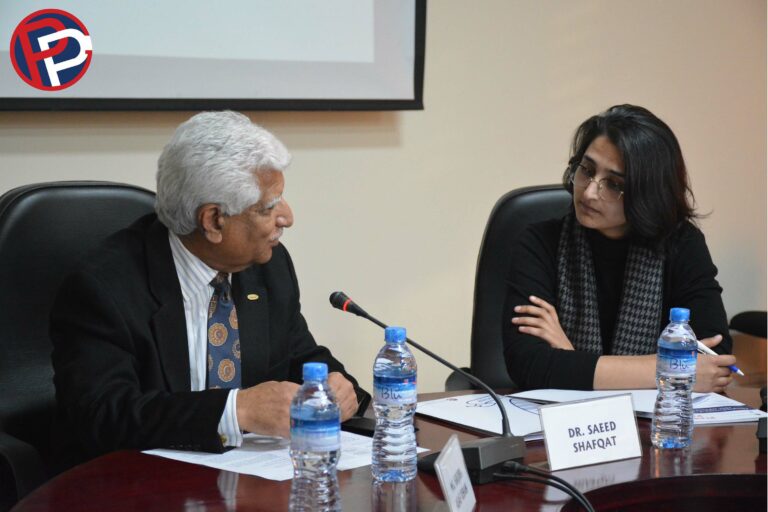 On 13th February 2020, CPPG organized a talk on “International Humanitarian Law for Policy Makers” in collaboration with International Committee for the Red Cross Pakistan. The session was initiated by Dr. Saeed Shafqat followed by two speakers; Ms. Hajira Asaf and Mr. Usman Khan. Ms. Hajira Asaf is a Communications Officer at ICRC and Mr. Usman Khan is a Legal Advisor, ICRC.

Ms. Hajira commenced the talk by giving an introduction about the operational work of ICRC in Pakistan and explained in depth about the principles, history and work areas of ICRC. ICRC is a Private Swiss Organization which came into being in 1863. It is a humanitarian organization explicitly tasked to help the suffering during incidents of armed conflicts. It works in partnership with Red Cross Movement, parties to Geneva Conventions, Law Enforcement and Judiciary (State Institutions), healthcare professionals, disaster management authorities, academia & civil society. Its basic principles include humanity, neutrality, impartiality and confidentiality. For ICRC, any conflict is big enough to demand humanitarian attention, and it has to be looked at in an unbiased way. There is no room for any religious, political and personal biases. The organization will remain truly neutral and ensure sustained access to the affected population, particularly those who are not or no longer in participating in conflict. Additionally, it is enthusiastically working in Pakistan to provide an understanding of Internal Humanitarian Law through talks and seminars. Moreover, it is presenting its services for the provision of first aid services, physical rehabilitation, protection of health care, community based risk education, restoring family links, dignified management of the dead and developing evidence-base on subjects of humanitarian import.

Further, Mr. Usman Khan described in detail the International Humanitarian Law and its application in Pakistan and the current world scenarios. It is also known as Law of Armed Conflict or Law of War. It is designed to regulate the excesses of armed conflict by limiting the means and methods of warfare, and limiting the suffering caused by war. It applies from the first act of hostilities for the duration of an armed conflict. It basically aims at protecting those who are not, no longer taking direct part in hostilities. Mr. Khan explained how it has originated from the Greek, Roman and Persian societies who had rules for providing protection to civilians, prohibiting the use of poison in wells and showing compassion towards the wounded. There are several verses in the Qur’an that also denounce the use of excessive force. IHL works on the major principles of limitation, distinction, proportionality, unnecessary suffering and military necessity. Unnecessary suffering must be avoided, a direct attack with less suffering must be ensured. The military necessity justifies the proportional use of military force against an enemy, to force him to submit and inhuman conduct must be avoided. Furthermore, he described how Pakistan has ratified four Geneva Conventions along with 195 other states. Mr. Khan explained the process of its application, which is decided by a committee keeping in view the legal limitations.  According to him, the law has played its role in minimizing major damages done by various armed conflicts and acting as a deterrent to further aggression. In context of Pakistan, there is a need for domestic legislative measures for more effective application of International Humanitarian Law.