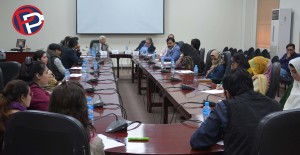 Is Brexit a purely British phenomenon?

The Centre for Public Policy and Governance (CPPG) held a seminar on the topic ‘Is Brexit a purely British Phenomena?’ on 28th November, 2018. The seminar took place with the support of the Embassy of France and in collaboration with the Alliance Francaise as part of the “Open Doors in Pakistan” Seminar Series.
The talk as delivered by Dr. Christian Lesquesne. Dr. Lesquesne is a regular Visiting Professor at the School of Government of LUISS University, the Diplomatic Academy in Vienna and the Department of Social Sciences of Charles University in Prague. He holds a PhD degree in Political Science from Sciences Po Paris. He was Deputy Director at CERI from 2000 – 2003 and then the Director from 2009 – 2013. Dr. Lesquesne was also the Director of the Centre Francais de Recherché en Sciences Socials (CEFRES) in Prague from 2004 – 2006, LSE-Sciences Po Alliance Professor at the European Institute of the London School of Economics from 2006 – 2008. He was also member and Vice President of the Board of Directors of Sciences Po from 2007 – 2013.

Accompanying Dr. Christian Lesquesne was the Theseus Visiting Professor at the University of Cologne 2009-2010. He is on the editorial board of Critique International, Politique Européenne, and the Journal of European Integration. The delegation also included Mr. Stephane Gailland and Mr. Sebastine Cartier.

The UK got membership of the EU in 1973. Since then it has experienced economic integration with Europe, has had to manage the mobility of immigrants, it has participated actively in the EU budget and has also dealt with the issue of porous borders of Northern Island and the Republic of Ireland

By  2016 however the UK had begun to distance itself from the political aspects of the EU. Then Prime Minister Mr. David Cameron coined the phenomena of ‘minimal engagement of politics’ indicating that Britain would only be interested in the ‘free trade of goods and products and not the services’. In lieu of that he decided to conduct a referendum. Though he campaigned for the ‘Remain’ argument, the results were not what he anticipated. 51% of the population voted ‘To leave’. Further Dr. Lesquesne explained the sociology of votes on a demographic basis. Where major counties like London and Manchester voted to ‘Remain’, other less metropolitan areas voted ‘To Leave’. In terms of age, the older generation voted ‘To leave’ and the younger generation voted ‘To Remain’. Furthermore in terms of literacy the educated and skilled population voted to ‘Remain’ and the labor class was in favor of the ‘Exit’. Mainly the reasons cited were identity insecurities, undermining of sovereignty and the budgetary allocation of the EU which requires a significant contribution from Britain alone.

The consequences of the referendum were instant. David Cameron resigned and Theresa May from the Conservative Party was elected as the succeeding Prime Minister. The first thing that Mrs. May did was approach relations with the EU on the basis of ‘Cherry picking’- saying that the membership was not feasible but Britain would want to retain some policies with the EU. The EU states rejected this bargain on the basis of principle and suggested that the UK would have to exit the EU first and then re-charter relations with EU states.

Dr. Lesquesne pointed out four major reasons that led to the referendum: First, the issue of dislike for immigrants and xenophobic sentiments. Second the budgetary contributions; the EU expected 80 billion Euro from the UK to solve all the engagements. Hard Brexiters were strongly against this, though they were ready to pledge 45 billion Euro. The third concern was free trade of goods and products but not services. Finally, the question of a hard border between Northern Island- which is part of UK territory and the Republic of Ireland (which is an EU member) and the exchange of goods.

Dr. Lesquesne went on to say that the Brexit could be the ‘Biggest Mistake since the end of World War II’ and nobody will know what will happen. He also termed it a ‘gamble’ that the ‘old generation played at the expense of young generations’ future’. Moving on he said that the ‘Brexiters’ have little realization over the severity of what they have done and the bilateral relations of UK and other European states hang in the air. At the end he termed it as an ‘Emotional Decision’ that many took.