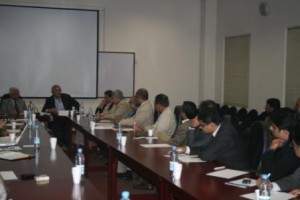 Mr. Tareen has rich and varied experiences in the private as well as the public sector. An entrepreneur by profession, he served as a lecturer and banker for a short period and then ventured into farming. He now manages farms in Lodhran using the most modern farming methods. He is also responsible for establishing one of Pakistan’s largest and most efficient Sugar milling operations (JDW Sugar Mills) supported by its own Sugar Plantation and Sugar cane research organisation. Mr.Tareen served as the chairman of Punjab Task Force on Agriculture from 1997-1999 and Punjab Task Force on Wheat Procurement and Marketing during 2001-2002. In 2004, he became part of the Federal Cabinet as the Minister of Industries, Production and Special Initiatives. He has been actively involved in the National Rural Support Programme and the Punjab Rural Support Programme and has served as Director of the Pakistan Poverty Alleviation Fund. He was a founder Member of the Governing Council of the Punjab Vocational Training Council (PVTC) and the Sponsor and Chairman of the Lodhran Pilot project. Venue of the seminar E-002, Forman Christian College (A Chartered University).