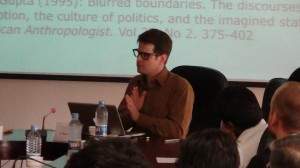 Home>Marginality and the State: A Case Study of Jharkhand, India

Marginality and the State: A Case Study of Jharkhand, India

Dr. Roger Begrich is a legal, political and medical anthropologist specializing in the socio cultural anthropology of the law and of the state, in critical indigenous theory, in the study of aging, as well as in drug and alcohol studies. He received his PhD from the John Hopkins University and has been teaching there as well as at the University of Zurich, Switzerland. He has conducted research in the Indian state of Jharkhand on indigeneity and alcohol and is currently preparing two research projects: on aging and pharmaceutical care as well as on the social implications of solar energy. He is a post doctoral fellow at the Institute for European Global Studies at the University of Basel in Switzerland.