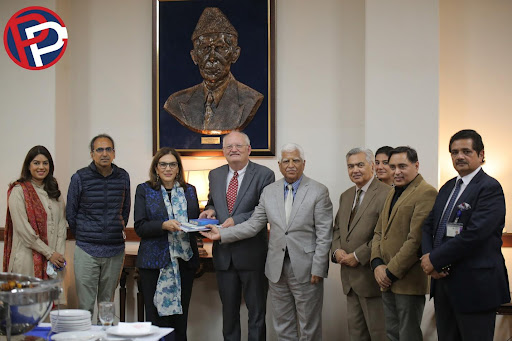 Ms Androulla Kaminara, Ambassador of the European Union (EU) to PakistanVisits the Centre for Public Policy and Governance (CPPG)

On Monday 22nd November 2021, Ms. Androulla Kaminara, Ambassador of the European Union (EU) to Pakistan visited the Centre for Public Policy and Governance (CPPG) at Forman Christian College (A Chartered University) as part of the Seminar Series organized regularly by CPPG.

Ms. Androulla Kaminara took up her duties as Ambassador and Head of the Delegation of the European Union to Pakistan on 17th September 2019. Prior to her appointment, Ms. Kaminara was the Director for Africa, Asia, Latin America, Caribbean and Pacific in the Directorate-General for European Civil Protection and Humanitarian Aid Operations (ECHO) of the European Commission since July 2016. Before joining the European Commission, Ms. Kaminara was a Special Adviser to two Cabinet Ministers in Greece and Managing Director of a private consultancy firm. She holds a Bachelor of Science (Hons.) in Geology and Physics (King’s College, University of London), an MSc in Management Science (Imperial College, University of London) as well as a Maîtrise in International Politics at ULB (Université Libre de Bruxelles) in Brussels.

Ms. Kaminara began her lecture by giving a brief history of the EU. Following two devastating world wars, the need for regional peace was a fundamental reason for the inception of the Union. A population of 450 million people now account for 16% of the world’s global trade, although collectively they account for less than the same percentage in terms of global population. The main goals of the EU include promoting peace, promoting a unified economic and monetary system, striving for inclusion and diversity, reducing trade barriers & building a single market, promoting research and technological development, securing environmental protection and finally, working towards social progress in the region.

Describing the EU’s organizational structure, Ms. Kaminara spoke about the six major bodies including the European Council (consisting of representatives from the governments of the 27 member states), the European Parliament (with 705 parliamentarians), the European Commission (the fundamental pillar of the Union responsible for legislating and enforcing new policies and regulations), the Council of the EU, the Court of Justice of the EU and the Central Bank.

Ms. Kaminara explained that in 2019, the first female President of the European Commission, Ms. Ursula von der Leyen was elected and she has striven for more female representation in positions of European Office. As a result one can observe a greater number of female EU Ambassadors.

The current top priorities of the Commission include climate change (more specifically reducing CO2 emissions by 55% by 2030 and by making the region climate neutral by 2050); social fairness in the economy; building new technologies and mainstreaming digital solutions; promoting respect for all EU beliefs; building a strong EU in the world; and strengthening democracy.

Talking about the relationship between the EU and Pakistan, the Ambassador said that the EU has been present in Pakistan since 1962 and has had a representative delegation here since 1985. Currently, the 2019 EU-Pakistan Strategic Plan acts as the guiding agenda on activities of the European Union in Pakistan. This plan involves work in various sectors including the following areas: science and technology, military dialogue, climate change & renewable energy. It is pertinent to note that the EU is Pakistan’s second largest trading partner and the number one destination of Pakistani exports. Related to this is Pakistan’s GSP+ status that facilitates the exports of Pakistani products with 0% import duty. Given this preferential trading status, Pakistani products are often sold at prices below even the domestic European producers and therefore a substantial demand for these products exists. Consequently up until 2019, one could witness a rise in exports to the EU (amounting to 7.5 bn euros in 2019). The GSP+ status requires certain obligations to be upheld by Pakistan including the 27 UN conventions it has signed. Human rights, labor rights, environment, and governance are areas that are of top concern. The current preferential status expires in 2023 for all countries under the regime.

Ms. Kaminara added that the EU also provides development cooperation in Pakistan. Since 2001, 2.5 bn euros worth of grants have been given. Moreover, the Multi Indicate Programming (MIP) determines the kind of economic assistance that the EU will deliver in Pakistan and this is divided across rural development (the majority of funds are targeted here, particularly for agricultural development-50%), education (30%), governance (4%), and others. The thematic areas are cross cutting and cover 1) green & inclusive growth, 2) human capital development and 3) governance, rule of law & human rights.

Another important programme of the EU is the Erasmus+ program that promotes international education through student exchanges. Initially restricted to students within Europe, the Erasmus programme promoted regional peace through greater cultural and people-to-people contact of European students. Eventually the program was expanded, and it is not open to international students as well. Pakistan is a ‘success story’ with respect to the Erasmus+ scholarships as a significant number of Pakistani students have secured scholarships (141 to be specific, at par or even higher than its regional counterparts). In fact, Pakistan ranks 3rd in the world in terms of securing this merit-based scholarship. Additionally, the Erasmus+ programme offers the opportunity of higher educational institutes (HEIs) to apply for capacity building grants, and it also offers international credit mobility, which allows HEIs to send faculty, staff and students abroad for academic activities such as research and training.

Coming towards the end of her presentation, Ms. Kaminara covered the EU-NATO engagement and explained that this is a complex one, and not necessarily reflected as black and white interactions. Similarly, with respect to the EU’s engagement with China, the relationship is one that includes both areas of agreement and areas where the two government’s strategic goals do not align. The new EU-China strategy focuses on four themes: 1) dialogue on global challenges, 2) engagement on human rights, 3) building common partnerships and 4) dialogue on defence.

Following the presentation, Dr. Saeed Shafqat thanked Ms. Kaminara for an insightful seminar and moderated a vibrant Question & Answer session. It began with a discussion on how the EU acts as a model of regional integration. Pakistan has ground to cover when it comes to trading with its regional neighbors as without regional integration, local development will suffer. Trading with your neighbors is a natural occurrence yet this is not occurring in South Asia.