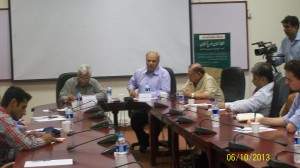 Home>Pakistan and Afghanistan: Future Perspectives on Bilateral relations, the Taliban and the impending U.S. Withdrawal

Pakistan and Afghanistan: Future Perspectives on Bilateral relations, the Taliban and the impending U.S. Withdrawal

Ambassador Riaz Mohammad Khan joined Pakistan Foreign Service in 1969. From 1979-86, From 1979-86, he was posted at Pakistan Mission to the United Nations. As Foreign Secretary he was responsible for international organizations and arms control and disarmament issues from 1998-2002, Foreign Office Spokesman 2000-2001 and as Director General responsible for Afghanistan and Soviet affairs from 1986-92. Mr. Khan served as Pakistan’s ambassador to China (2002-2005), to European Union, Belgium and Luxembourg (1995-1998) and to Kazakhstan and Kyrghyztan (1992-1995). From 2005 – 2008, he was Foreign Secretary of Pakistan.