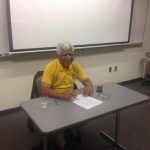 Home>Prof Dr. Shafqat’s talk on “How President Trump has Changed the Perception of the US as a Global Power” at Wake Forest University

Prof Dr. Shafqat’s talk on “How President Trump has Changed the Perception of the US as a Global Power” at Wake Forest University

On 22nd May, CPPG Professor and Founding Director Dr. Saeed Shafqat visited Wake Forest University, USA to deliver a talk on “How President Trump has Changed the Perception of the US as a Global Power.” The talk was held in collaboration with the American Institute of Pakistan Studies (AIPS) and the Middle East & South Asia Studies Program, Wake Forest. Here he met with faculty members of the University including Dr. Charles Kennedy who has also visited Centre for Public Policy and Governance (CPPG) before to deliver seminars. Possible collaborations for the exchange of faculty and students were also discussed during the talks and meetings.  Professor Dr Shafqat also met Professor Gilmartin, who is  Professor of History (Modern South Asia) at North Carolina State University and also a Research Fellow at the National Humanities Center, a prestigious US research center in humanities. Dr.Shafqat presented CPPG souvenirs to Prof David Gilmartin.
Earlier, CPPG Founding Director Dr. Saeed Shafqat also visited Villanova University, USA.
Dr. Shafqat presenting CPPG’s Quarterly 10 Years Special Issue and souvenirs to Professor Hafeez Malik, an eminent Pakistani-American scholar. Professor Malik has been teaching at Villanova University since 1961, and he was the founder of American Institute of Pakistan Studies(AIPS) in 1973, and co-founder of the Pakistan American Congress in 1992. He also launched the Journal of South Asian and Middle Eastern Studies in 1977 and he has been its Editor since. Professor Malik is the author of 18 books on US Policy towards Russia, South Asia, Central Asia and the Middle East. He has been and continues to serve as both a mentor and an inspiration to a generation of Pakistani and American scholars.