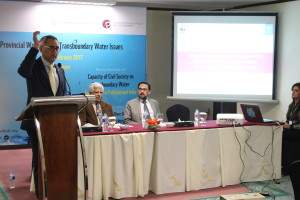 The Centre for Public Policy and Governance (CPPG), Forman Christian College (A Chartered University) in collaboration with WWF-Pakistan hosted a Two – Day Provincial Workshop on Transboundary Water Governance entitled ‘Raising awareness and capacity of civil society on transboundary water governance in India and Pakistan’at Avari Hotel, Lahore. The event took place between the 7th and 8th of February 2017 and was based on the Case Study prepared by WWF on the ‘Stretch of River Ravi from Madhopur, India to Lahore, Pakistan.’

The event was well attended by a variety of representatives from government departments, CSOs and NGOs as well as academics and students while Mr. Saif Anjum, Secretary Environmental Protection Department, Government of Punjab, was the Guest of Honor. Dr. Saeed Shafqat, Dr. Imdad Hussain and Ms. Saba Shahid represented the CPPG at the event and carried forward their commitment to engage with WWF on evidence based research and advocacy for data-driven policy making. Mr. Moeen ud Din Sheikh, a former student of the CPPG and currently Superintending Engineer at the Punjab Irrigation Department also participated in the workshop.

Mr. Hammad Naqi Khan, Director General WWF-Pakistan gave the welcome note in which he spoke of WWF’s continued advocacy towards protecting the environment and engaging in projects that enhanced Pakistan’s sustainable development. He noted that the challenges of climate change are global and require cooperation amongst different countries, including with respect to shared water resources. Mr. Khan stated that positive engagement over transboundary waters will lead to benefits that go beyond the water sector and will create opportunities for improved livelihoods including water, food and energy security. Similarly effective water governance could prevent floods and droughts and could result in healthy ecosystems.

Dr. Saeed Shafqat spoke on the occasion and outlined the three main objectives of the workshop. These included raising awareness about trans boundary water governance, promoting engagement and deliberation among stakeholders, and finally, collaborating and partnering with WWF in linking research with policy. He also added that the workshop would contribute towards the improvement of the listening capacity of the Punjab Government and help build the competence of the government and civil society. Through dialogue, deliberation and investigation the CPPG aims to enhance a culture of research that feeds into the policy arena of Pakistan. Such initiatives, Dr. Shafqat explained, could help us move from a belief-based to a knowledge-based society. Over the past 40 years Pakistan has become an increasingly religiously driven society, where reason, logic, empirical investigation have frequently lost ground and where social and political discourse is increasingly guided and driven by belief systems. While most societies have maintained a balance between belief and knowledge, Pakistan has recently been affected by disrupted social harmony, intolerance and a polarization of communities. However, innovation, satellite technology and IT have broken physical and social barriers and while some are finding it hard to adapt to this global revolution, others are using the same tools to expand development and accelerate Pakistan’s progress.

Dr. Shafqat stressed the need for parliamentarians and professionals to work together to develop university education; where the importance of a ‘knowledge based society’ is recognized. University education must focus on building cultures of research, innovation technology and also new pedagogies of education – unless a shared vision is developed as has happened in the US, Malaysia or Korea, transformation of societies does not occur.

Mr. Saif Anjum emphasized the importance of collaborative development. He said there were two approaches to water governance, one that involved formal channels such as treaties and agreements and others in which CSOs and non-governmental organizations played a significant role. He said that effective policy-making demanded that the government committed itself to listening to stakeholders and that his participation demonstrated such openness to learning.

Other presentations during the workshop included one by Mr. Sohail Ali Naqvi,WWF-Pakistan, who spoke about the hydrological aspects of the region identifying relevant surface water and ground water issues. A video presentation by Ms. Maira Hayat, PhD. Research Fellow at the University of Chicago was also made during the session on the socioeconomic challenges of the Ravi region.

In the session on water governance and institutions, Ms. Fazilda Nabeel PhD. Candidate University of Sussex/ Visiting Doctoral Researcher at Center for Water Informatics and Technology, LUMS gave the first presentation. Ms. Fazilda, amongst other things, touched upon the various legislations regarding water governance, their effectiveness and the different loopholes that exist.

Dr. Imdad Hussain also presented his research in this session in which he spoke about the scenario of “Drinking Water in Lahore.” His presentation involved an evaluation of Lahore’s Water and Sanitation Agency (WASA) and its service delivery mechanisms. While WASA was performing reasonably well until 2007, in recent years the agency’s efficiency has witnessed a sharp decline. Dr. Hussain explained that a large area of Lahore remained uncovered by water supply and that poorer areas suffered the most. WASA’s water supply also experiences from wastage and leakage of up to 60 per cent. In terms of governance, policy-makers need to revise water tariff rates and need to consider removing flat rates, even if this is a contentious issue. Communities need to be sensitized about the dangers of water wastage while greater attention needs to be paid to how we as a society deal with water use.

Dr. Hussain explained the significant link that exists between urban planning and water governance and how haphazard city planning has been detrimental to Lahore’s water management capacity. For instance plazas and commercial buildings are being constructed in residential areas, further burdening the city’s water infrastructure. Similarly population growth and a culture of housing by nuclear families have substantially affected water demand in the city. A greater documentation of water management is thus an urgent necessity for effective policy making. Furthermore emphasis needs to be paid to integrating land use and water governance with reference to community welfare and environmental protection.
Mr. Moeen ud Din Sheikh, Superintending Engineer at the Punjab Irrigation Department, and an alumnus of the CPPG also participated at the workshop. Mr. Sheikh shared his experiences in the field of water governance with the audience and spoke of the importance of effective governance frameworks to tackle multi-dimensional issues such as water. Mr. Sheikh highlighted the need to advocate for participatory development in particular by promoting greater farmer participation in decision-making processes. He explained how small farmers at the ‘tail-end’ of water channels faced the greatest challenges, while illegal means of water irrigation and extraction adversely impact agricultural water use in the country. Mr. Sheikh added that while change in terms of improving water governance was incremental, it was nonetheless inevitable.