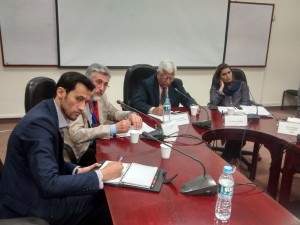 Home>Rationalizing Discourse on Pak – Afghan Relations: Is a Reset from Acrimony to Amity possible?

Rationalizing Discourse on Pak – Afghan Relations: Is a Reset from Acrimony to Amity possible?

The Centre for Public Policy and Governance (CPPG) in collaboration with

“Rationalizing Discourse on Pak – Afghan Relations: Is a Reset from Acrimony to Amity possible?”

Ms. Shazia Marri has previously served as a Provincial Minister for Information, Tourism and Electric Power of Sindh as well as the Advisor to the Sindh Government on Oil and Gas. She has also led Pakistan’s delegation to the 53rd session of CSW at the UN. She remained a member of Provincial Assembly of Sindh in 2002 and 2008.

Mr. Sayed Ishaq Gailani is the leader of Hezb-e-Nuhzat Hambastagi Milli. He holds a Bachelor’s degree in Law and Political Science from Tehran University. After the defeat of USSR forces, Mr. Gailani began his efforts for peace building, national solidarity and unity