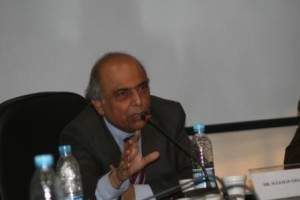 Mr. Suleman Ghani has 36 years of public service experience as a member of the District Management Group, of which 22 have been at the highest Provincial and Federal levels. He served as the Chairman of Planning & Development Board, Government of Punjab from 2005-2008, where he formulated the socio-economic development policy; recommended sector-wise investment plans; formulated mid to long term strategic development frameworks and the Annual Development Program averaging over Rs. 100 billion each year for the Punjab. He has also remained the Economic Minister, Pakistan Mission to the European Union, Brussels from 2000-2003.
He is currently the Senior Policy Advisor on US-Aid Firm Project, and has previously been the Executive Head of Federal Ministry of Commerce during 2009, overseeing the formulation and implementation of Pakistan’s Trade Policy. He has also led the Ministry of Industries, Production and Special Initiatives, as well as the Ministry of Irrigation and Power Department, and Information Culture & Youth Affairs Department for the Government of Punjab.