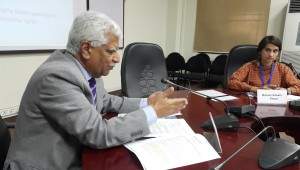 Regulation and control of non-governmental organizations (NGOs) has always been a complicated subject. There is a broad spectrum of opinions on the subject ranging from complete governmental control and oversight, to a completely self-regulated sector. This subject is currently of even more relevance in Pakistan because of the consistent attempts by the government to exert greater control over NGOs in the past few years. The most recent of these attempts is the introduction of a new policy for regulation of International Non-governmental Organizations (INGOs) put forth by the Ministry of Interior (MOI) in October 2015.
Prior to the introduction of this policy, the regulation of INGOs came under the Economic Affairs Division (EAD) of the Ministry of Finance and was done through the “Policy for Regulation of Organizations Receiving Foreign Contributions”. Introduced in November 2013, this was considered the prevailing INGO policy in the country. This EAD policy has been replaced by the current policy, which states that it “will have sole jurisdiction over all types of International Non-governmental organizations (INGOs)…”. It is important to note that currently there are no uniform law governing non-profit organizations – whether national or international.
There are issues of rights, responsibilities and transparency on funding that the INGO policy aims to regulate. We have identified and aim to explore ways to bridge the following gaps: The impetus behind the introduction of the current INGO policy primarily relates to national security considerations. A series of incidents involving foreign funded NGOs (such as Save the Children) raised concern about the risk posed by such organizations as potential security hazards. The government claimed that there was no proper oversight of the non-profit sector and many non-profits were being misused for anti-state activities. Among several groups, there is considerable skepticism about the validity of these concerns; resultantly the policy formed is a knee jerk reaction and suffers from serious handicaps. Both national and International NGO’s are showing reluctance in compliance and the government is besieged to enforce the INGO policy.
Both the current INGO policy as well as the previous EAD one were introduced and administered by the federal government (MOI and Ministry of Finance). In a post 18th amendment context, this raises concerns about the role of the provincial governmental departments, particularly the Social Welfare Department (SWD) that is meant to be responsible for the registration and regulation of the NGO sector as a whole. Both the EAD and MOI remain involved in administering the policy. For example, organizations are required to submit their annual budgets and plans of action to the MOI as well as the Economic Affairs Division at the time of getting approval and thereafter annually. There is no role and space given to the SWD, which is a key provincial department dealing with the NGOs. Given that a large number of INGOs and their local partners operate at the district level, this is particularly problematic because it leads to a
large disconnect between the policy and those most directly affected by it. This also adds to the uncertainty and lack of transparency around the implementation of the policy.
Ostensibly, the policy is expected to monitor and evaluate the activities of INGOs and local NGOs receiving foreign funding. However, anecdotal evidence suggests that the target of the policy have mostly been rights based NGOs, particularly those working on advocacy and the promotion of rights of women and minorities.
This roundtable therefore intends to bring together representatives of NGOs working in Punjab to discuss these issues and share their experiences – both in terms of the implementation of this policy as well as interacting with the Social Welfare department through the course of their activities. It will address the broad question of the regulation of NGOs as well as more specific concerns raised above. In that spirit it will invite participants to present their suggestions towards making the INGO Policy transparent, effective and more tolerable for the NGO community; so that it improves the trust level between the government and the NGOs.