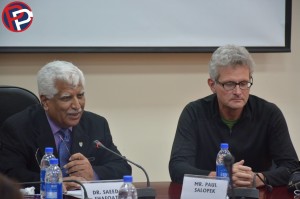 Home>Seminar on “Walking Around the World: through Pakistan” held at CPPG

Seminar on “Walking Around the World: through Pakistan” held at CPPG

A seminar on “Walking Around the World: through Pakistan” was held at the Centre for Public Policy and Governance, Forman Christian College (A Chartered University). The distinguished guest speaker was Mr. Paul Salopek. CPPG Founding Director Dr. Saeed Shafqat was also present on the occasion.

Mr. Paul Salopek is a veteran foreign correspondent who has written about Africa, Middle East, Europe, Latin America and Central Asia for The National Geographic, The Chicago Tribune, The New York Times, The Atlantic and many other publications.

Born in California, Mr. Salopek was raised in central Mexico and has worked as a journalist in more than 50 countries. He has earned most of America’s top written media awards including two Pulitzers for his reporting on human genetics and civil war in Congo. Apart from Journalism, he has worked as a commercial fisherman in the Atlantic and Pacific Oceans, mined gold in Australia and managed a ranch in Mexico.