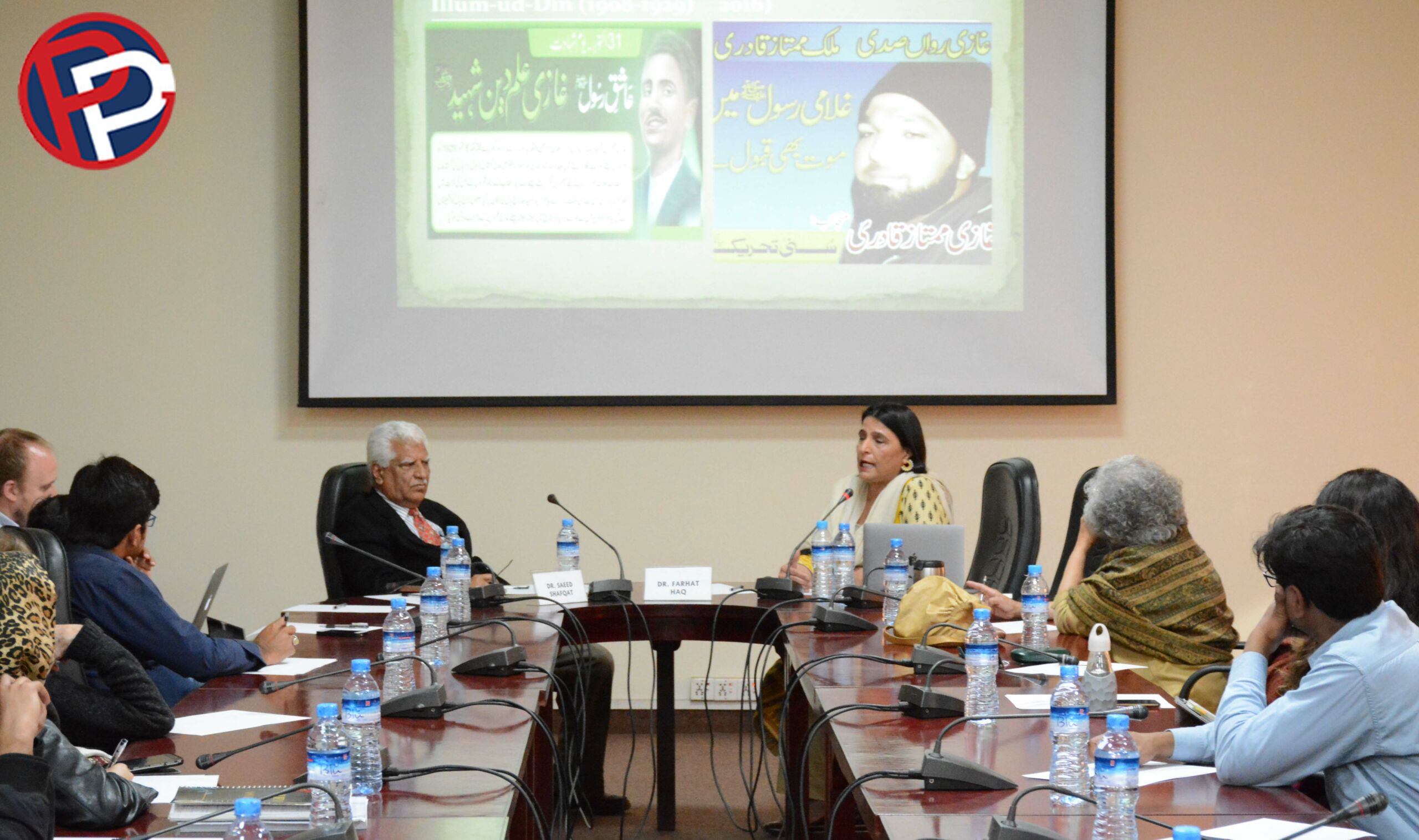 Home>Sharia and the State in Pakistan: Blasphemy Politics

Sharia and the State in Pakistan: Blasphemy Politics

On Wednesday 6th March, Dr. Farhat Haq was invited to the CPPG to present her upcoming book Sharia and the State in Pakistan: Blasphemy Politics.

Dr. Farhat Haq earned her PhD in Political Science from Cornell University, Ithaca, New York. She is Professor and Chair Political Science Department, Manmouth College Illinois, USA since 1999 and was also the Director – International Studies Program (2002-2014). She has a vast experience of teaching in Pakistan and abroad. Dr. Haq has taught at LUMS and also been Faculty coordinator, India Studies Program, Pune, India. Currently, she is also the President of American Institute of Pakistan Studies (AIPS), USA.
Dr. Haq began by talking about how the term ‘sharia’ is perceived in the USA and tends to have a negative connotation, similar to how the term ‘Jihad’ is seen. For Muslims, ‘Sharia’ is considered to be God’s path to living a good life. She spoke about the evolution of our understanding of sharia from being very flexible, contextualized and based on the extensive work of Islamic jurists in the pre-modern era, to becoming something very narrow and politicized in Modern times.

In the pre-modern era, the accused were given benefit of doubt and there was strong belief in the idea that even if a guilty person was given a lenient sentence, God would be able to determine the rightful sentence in the hereafter. Severe punishments were only announced in the most extreme cases, usually as the last resort. Today, specifically when it comes to Blasphemy cases, our society has become less tolerant and is quick to assert the accused as Wajibul-Qatal. This has lead to great difficulty in altering the laws as political opposition and public protests make it almost impossible to change the narrative.

The Indian Penal Code designed by the British can be held responsible in determining our modern laws on Blasphemy. The events of 1927 for instance, when Illum uddin Ghazi murdered a book publisher for publishing something that was derogatory towards the Prophet, his death sentence was highly publicized and many celebrated him as a martyr. This led to the British implementing the Indian Penal Code of 295 A, which sought to penalize those who hurt religious sentiment. The liberal constitutional structure thus aimed to balance freedoms of religious practice with the need to control the same practices if they went against ‘public order.’ In Pakistan, like in other modern Muslim nations, this distinction has been more difficult to make. We have reached a point where, following Zia’s alterations to the Hudood Laws, the sanctity of the Blasphemy laws have become so cemented that there is no room for religious interpretive pluralism. This is a contemporary issue, which Dr. Haq finds very strange; how can we claim that there is a man-made law that is so perfectly constructed that it can reflect the will of God? This is something worth exploring.
Concluding her arguments, Dr. Haq stated that religious ulema with sound knowledge would be key in bringing about reform. These ulema need to be empowered and can help reinstate ‘ethics and civic virtues’ back into a system that has become bereft of it and more about power politics.