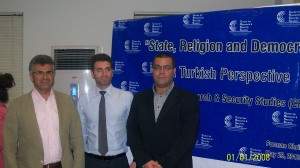 He has published a large number of conference papers that include “The Black Muslims and Their Relations with the Muslim countries in Political, Economic and Religious Perspectives”, Eurames Annual Conference University of Warwick, July 1993, “The Nation of Islam and its relationship with Mainline Islam”, CENSUR 11th International Congress, Vrije Univeersiteit, August 1997 and many others.

Dr. Ali Murat holds  a PhD degree in Anthropology from London School of Economics and Political science. Deputy Head of the Department of Public Administration at Fatih University, October 1999-May 2005. Currently he is heading the department.

His publications include “Fatima: Anthropological Analysis of Cultural Centres in Portugal, a Christian pilgrimage” (Kaknus Publications Istanbul), “After the Iraq War, the Middle East” (TASAM publications) and several other book chapters. In addition to this, Dr. YEL has an extensive list of academic publications to his credit.