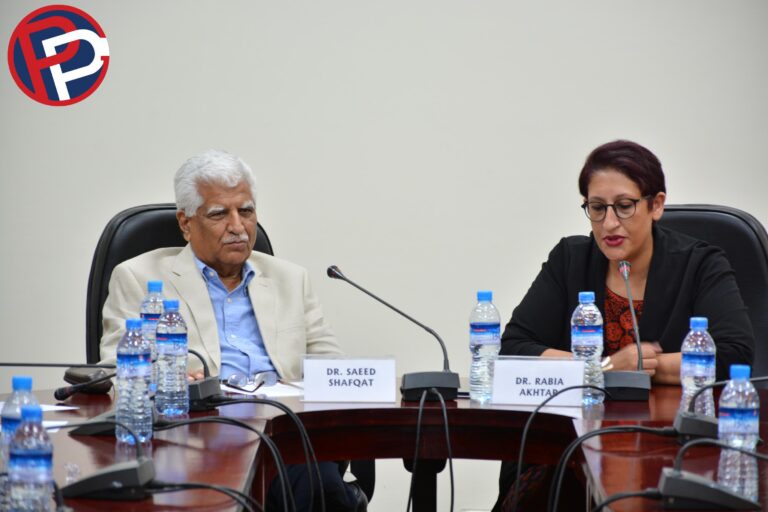 Home>Status of Archival Research in Pakistan: Strategic Studies and Beyond

Status of Archival Research in Pakistan: Strategic Studies and Beyond

On the 1st of October 2019, the CPPG invited Dr. Rabia Akhtar to speak on the “Status of Archival Research in Pakistan: Strategic Studies and Beyond.” Dr. Akhtar is Director, Centre for Security, Strategy and Policy Research, and Director School of Integrated Social Sciences at University of Lahore.

Dr. Akhtar is also part of the task force of the national council of foreign affairs set up by the PM in November of last year. The task force is made up of a 10 member advisory council composed of academics on a voluntary basis that meet in Islamabad on a monthly basis to analyze the direction of Pakistan’s foreign policy. The primary purpose of these meetings is for academics to direct the government out of ad hoc policies and focus on long-term core issues (five to ten years), strategic and non-strategic. The question arises on how the academic feedback is actually being used by the foreign office and how and where the input of the advisory council is being implemented. To address this concern, the relevant ministers attend the meetings depending on the agenda on the table and discuss tangible and deliverable actions. Since Pakistan and its surroundings are rapidly changing, policies tend to become myopic and long-term analysis is often difficult to carry out.

Moving on to talk about the process of conducting historical research in Pakistan particularly with reference to her book ‘The Blind Eye: U.S. Non-proliferation Policy Towards Pakistan from Ford to Clinton’, Dr. Akhtar commented that completing quality research in Pakistan especially at postgraduate level can be challenging. Her research focused on the lengths and limitations of conducting historical archival research in Pakistan, in comparison to the US. When exploring topics and historical policies such as that of US non-proliferation towards Pakistan from 1972-2001, archival data in Pakistan is largely missing or not accessible to a common person. US archives only show one side of the story, their side. Therefore an important chunk of our history will be shown and interpreted from an American perspective, using American resources.

There exist three main sources of archives in Pakistan; (1) The National Archives of Pakistan, in Lahore at the Punjab Civil Secretariat. This sas extensive data on the affairs of the country post 1948, as well as data on the Sikh Empire of 1809, the 1857 revolution, Kashmir, British crown relations with Patiala, as well as scripts in Persian language. (2) The National Library of Pakistan in Islamabad houses microfilms and newspapers from the colonial period, as well as M. A. Siddiqui’s Handbook on Archives at the N Block of the Secretariat. Here, however, the staff is often unwilling to help as data is largely scattered and personnel do not possess proper training of maintenance of resources and how to lead you to them. (3) National Documentation Center at the Cabinet Division houses data from 1974, but access is only provided to a limited number of high profile individuals and the security protocol is extremely high. Other than that, digitized data on colonial history can be found at the London University, UK.

Finding archival data in Pakistan, especially nuclear archives, is an extremely difficult task due to national security issues. The citizen’s right to free speech and right to information is hindered by legal layers and complexities regarding national security. There are four major limitations that hinder acess to information including: Law of Defamation; what is considered National/ Official Secrets; Limitations on affairs of state (state and judiciary); and withholding information on national security grounds. Gaining access to Pakistan’s archives is very difficult also because there is no process of de-classification. If such a process existed, whereby archives were filtered to allow the public to read through resources that did not fall under the above limitations, a more complete interpretation of a certain historical document would be possible. However since this is not the case, Dr. Akhtar found that her research would be influenced by a single dimensional narrative on state affairs, especially on strategic nuclear matters among leaders such as Ford and Z. Bhutto. Such vital information means a huge deal to citizens, and the availability of such documents would provide a comparative narrative of what the media at the time revealed on the matter versus what was actually discussed by leaders in letters. Such disparity and contradiction poses a dichotomy to the researcher in terms of objectivity and interpretation, but an original document like that would provide evidence that would speak for itself.

Access to archives is unavailable because evidence creates dents in state controlled narratives and real data could often be disturbing for the public to process as it may pose a threat to their nationalism and objectivity. For example, the state shies away to tell the public how cleverly Pakistan manipulated the US during Bhutto’s regime and the 1988 nuclear test. Dr. Akhtar feels that such information on the other hand should be made readily available to the public as a matter to be celebrated. Pakistan should take credit for the process through which it became a nuclear-armed state despite its economic limitations. We are a small country but one that managed to achieve a lot within a very short time span. This should be celebrated and we need to stop playing the ‘victim’ card.

Similarly, due to fear of compromising national security, citizens are not told what Pakistan’s evacuation zones are. This is information the public has right to access especially in the case that nuclear confrontation erupts.

In absence of primary resources, secondary sources need to considered, but their reliability and credibility must be questioned, including interpretations of biographies, autobiographies and works of other historians.

Information gaps need to be closed and one way of doing so would be through civil society pressure groups urging the foreign office to declassify certain documents on early history on formative relations and foreign affairs. The image of our country is tainted largely due to the state concealing facts and not revealing its side of the story. This leads to foreign researchers writing about our history because we refuse to do so ourselves. We must demand access to information and must help play a part in providing analysis that is factual and based on accurate data records. This can help us a build a narrative where we own and celebrate our history.