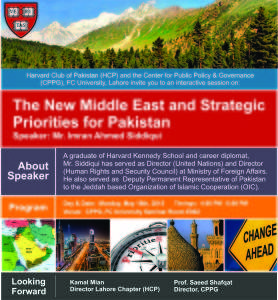 The New Middle East and Strategic Priorities for Pakistan

Mr. Imran Ahmed Siddiqui holds a degree in Masters in Public Administration from Harvard Kennedy School, USA. He has been Deputy Permanent Representative of Pakistan to Organization of Islamic Cooperation (OIC) from August 2009 – 2014 and also Deputy Consul General at the Consulate General of Pakistan, Jeddah. He was Director (Human Rights and Security Council), Ministry of Foreign Affairs at the UN from May 2007 – 2009. He is a career diplomat and joined the Foreign Service of Pakistan in March 1997