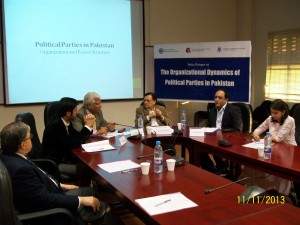 The Organizational Dynamics of Political Parties and Electoral Violence in Pakistan

Dr. Mohammad Waseem is Professor of Political Science at the Department of Social Sciences, Lahore University of Management Sciences. He was previously Chairman of the International Relations Department, Quaid-e-Azam University. Dr. Waseem has written extensively on ethnic, Islamic, constitutional, electoral and sectarian politics of Pakistan. His books include: Politics and the State in Pakistan (1989), The 1993 Elections in Pakistan (1994) and Strengthening of Democracy in Pakistan (co-authored with S.J. Burki) (2002). He also edited a book entitled Electoral Reform in Pakistan (2002). Professor Waseem has served as visiting professor and fellow at numerous international universities such as Sciences Po Paris; and has been on the editorial boards of various international academic journals such as Contemporary South Asia.

Mr. Iqbal Haider Butt is is a youth development expert and and an independent development consultant. He currently works for Democracy Reporting International (DRI) as its Provincial  Coordinator in Punjab. Mr. Butt is the author of a book entitled “Revisisting Student Politics in Pakistan”. He has contributed extensively to projects affiliated with national and international agencies on subjects of democracy and governance; and youth and conflict transformation. His portfolio is further enriched as an United Nations University (UNU) Fellow (2000), International Visitor on Preventive Diplomacy and Conflict Resolution under the US Department of State (2001), and by training in Conflict Transformation Skills from the Eastern Mennonite University (EMU), USA (2001).

Mr. Hussain Nadim is currently serving as Special Assistant to Federal Minister at the Ministry of Planning & Development in Islamabad. Prior to this, Mr. Nadim worked as an Electoral Campaign Advisor for PML (N). Mr. Nadim has also previously served as a faculty member at NUST, and Quad-e-Azam University where he taught Political Science, IR, and Islamic Political Philosophy. Mr. Nadim holds a BA from George Washington University, USA and an MPhil from Cambridge University, UK,  and has also been a Scholar at Woodrow Wilson Center in Washington DC. His area of expertise include militancy, terrorism, US Foreign Policy, and electoral policy.