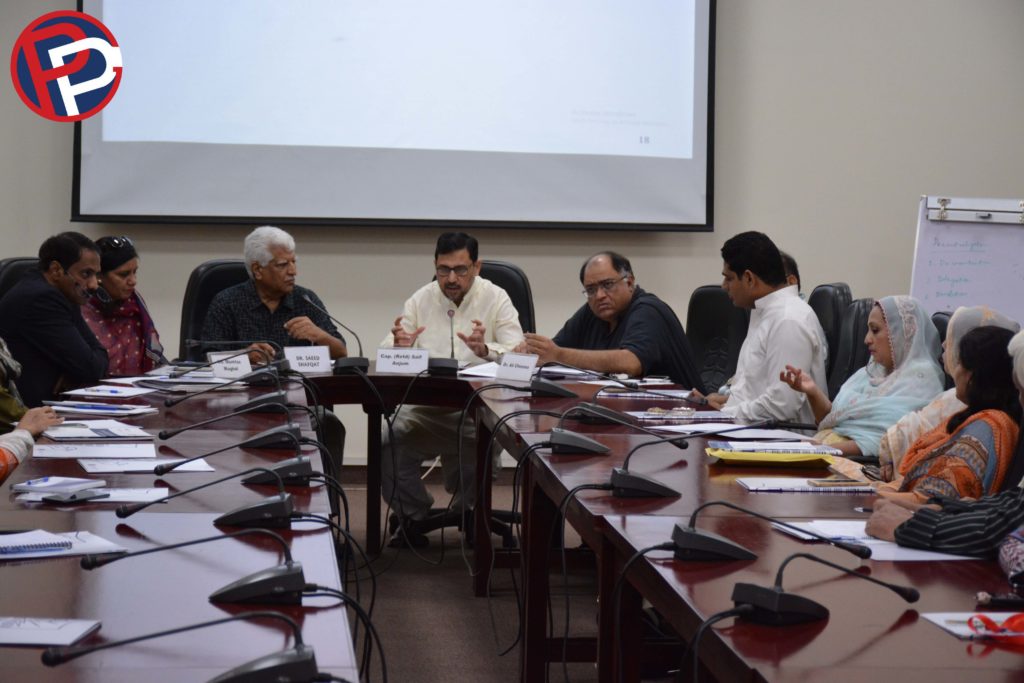 Mr. Saif Anjum gave a brief overview about the new local government Act. He mentioned the distinguishing features of the system. The features includes its provision to strengthen the parties rather the constituency based politics, bringing people closer to the governments, maintaining a transparent structure, incorporation of yard stick competition, ensuring the effective enforcement of municipal regulations and setting up effective instruments with provincial government to ensure that local government delivers its mandate.

While explaining how the new system will bring the government closer to the people, he stated that the new system has separate local governments for rural and urban areas. The rural governments will work at tehsil levels. For the cities an elected mayor will be responsible for harnessing the potential of cities and promote them as engines of growth. The mayor will be elected through majority voting, which means that both the public’s popularity and their expectations will pressurize the mayor to deliver. Provisions in the Act also make it very difficult to dismiss a city mayor as his removal will also imply that the complementing public officials also dissolve their positions. In other words, the Commission in charge of determining the longevity of a mayor’s tenure will really have to consider a decision to remove the mayor from his post as this will impact their own office.

In terms of the financing of the Local Governments, the Punjab Finance Commission will assure its transfers 26% to 28 % of the gross revenue down to the local level. This is a major leap from the previous system. On the other hand the Local Government Commission will take care of establishment and review of local areas, inquiring into complaints, coordination and conflict reconciliation between local and provincial governments and laying down report on working of local governments.

Mr. Anjum also explained the need to expand the tax base for greater revenue generation, specifically urban property tax collection. He mentioned that urban tax collection by Lahore, Faisalabad and Karachi is $ 32 million, $ 8 million and $ 21 million respectively as compared to other South Asian cities like Mumbai and Bangalore which collect $ 373 million and $ 201 million respectively.

He added that the present enforcement capacity of local government is virtually nonexistent which reduces the livability of the cities and adds costs to the economy. To build greater trust, a new system has been proposed whereby gradual penalties will be enforced for criminal offences in terms of land use and construction with final determination of a case by a Municipal Magistrate.

The proposed law holds local governments accountable for the legality as well as expediency of their actions and also envisages the system of regular and independent audits, reports for public information in order to ensure the impartiality.

In order to address the issues of governance over areas that go beyond city limits, Mr. Anjum explained how we need to re-define city borders; functional city areas must be the same as official delineations. This would help the structural planning, regional land use plans and building regulations enforcement by local government.

Dr. Ali Cheema pointed out the systemic failure and features of the new system in comparison with the older ones. While comparing the 2019 Act to the previous ones (2001 and 2013); the direct part elections of mayor and council is a major distinguishing factor. According to him; this new act address most of the previous issues but the implementation part is still a question mark for the authorities.

Ms. Mumtaz Mughal added her concerns about why women’s representation has not been kept at 33% along with concerns over the credibility of the Panchaiyat and Jirga system which the new Act gives room for.

Audience members were also worried about the sustainability of the Act given that previous attempts at setting up a successful system of local governance has failed in the past or have been rejected by successive governments. Mr. Anjum said that following the restructuring phase and transition onto the new local government system, the proper implementation of the relevant legislations will be determining factor of the popularity of these changes. If the masses respond to this system and continue to demand its establishment, then successive governments were bound to follow it.