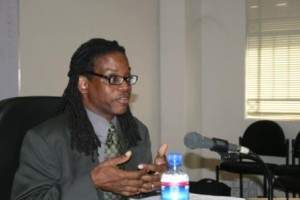 The Rise of Afro Americans in American Politics

Dr. Clarence Lusane, an American scholar who has lectured at various universities including Harvard, Georgetown, George Washington, London School of Economics and University of Paris among others and is an author of various books, most recent being “Colin Powell and Condeleezza Rice : Foreign Policy, Race and the American Century (2006)” gave a talk on the “The Rise of Afro Americans in American Politics” on the 5th of March 2010.