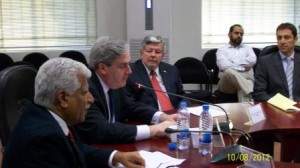 H.E Mr. Philippe THIEBAUD has diverse and distinguished career in the French Foreign Service. His Excellency has served as Director General, Global Public Goods at the Ministry of Foreign Affairs. In 2005, H.E has been Ambassador extraordinary and plenipotentiary to the Republic of Korea Seoul. His Excellency has also served for the Permanent Mission of France to the UN as First Counsellor and as Deputy Permanent Representative from 1994 to 1997. He has been Director Space and Nuclear Affairs in the Ministry of Foreign Affairs, and then later in 1993 as Director Non Proliferation. He has also been associated with the Permanent Mission to the EU (Brussels) as Counsellor.