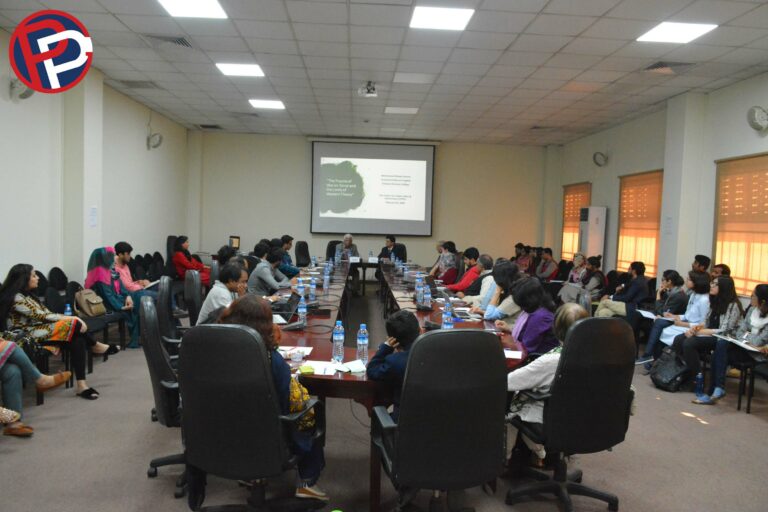 On Monday, 24th of February CPPG organized a seminar by Dr. Muhammad Waqar Azeem, Assistant Professor at Forman Christian College University on ‘The Trauma of War on Terror and the Limits of Western Theory”. Dr. Azeem completed his PhD in English from State University of New York, Binghamton.

Dr. Azeem initiated his talk by saying that trauma is the problem of the survivor. After 9/11, Pakistan experienced an extreme wave of terrorism, which made us all ‘survivors of trauma.’ He developed a transnational framework of trauma theory by focusing on two distinct scholarly positions of Cathy Caruth and Stef Craps. He applied these literary frameworks on two Post 9/11 novels, Jonathan Foer’s Extremely Loud and Incredibly Close and Nadeem Aslam’s The Blind Man’s Garden. His analysis demonstrated the United State’s extrapolation of 9/11 trauma to the category of nation assuming that only the American nationals are the legitimate traumatized subjects.

Analysing the work of Caruth, Azeem argued that Caruth takes the position that trauma is not inflicted in the first moments of a particular incident. It is the reimagining of the event that causes its repetition and recurrence. Sigmund Freud relates trauma to the original impact of the tragedy, while Caruth considers its non-existence in the actual event. It is always a moment later when the subject emerges from the suddenness of the shock. The subject’s understanding then translates into a sense of loss. Caruth underscores the significance of literary language in understanding of the trauma as a subject’s missed contact with tragedy. When an individual narrates the trauma, he erases the original encounter and transfers the haunting into the narrative. The narrative erases the original impact substituting it with the narrative that is not the event itself. There lies the healing potential of the story that negates the real. Caruth thereby considers the language of trauma to be somewhat literary. Craps on the other hand confronts Caruth and her theoretical predecessors, explicating a diffuse trauma that does not emanate from one momentous event but from persistent conditions of life whose cumulative effect far exceeds any single event. He says that Caruth represents an event-based trauma, not describing the effects of trauma on social, economic and political systems. Caruth theory suppresses the traumatic experiences of non-western and minority cultures. It universalizes the definitions of trauma that are based on western modernity. Speaking about Foer’s Extremely Loud and Incredibly Close Dr. Azeem further said that it exploits an event-based trauma to bolster only the trauma of the white narrator of the Western origin. This event-based approach neglects the historical approach to 9/11. Craps talks about how modern theorists divert the historical side of the trauma, thus do not take trauma as the persistent condition of the people. Conversele, Nadeem Aslam’s The Blind Man’s Garden explores the United State’s acts of violence in Pakistan and Afghanistan. The trauma represented in this novel extends both Caruth and Craps’ models of trauma theory. It gives a transnational trauma witnessed by the subject taking ethnic and religious affiliations over national identity. Taking history as the third event, the novel combines trauma and history, using the metaphors of wounds and candles. This is represented through the memory Rohan, a major character in the story. While, the character of Fakir is a metaphor for recovery. The usage of Sufi zikr for healing from the psychological consequences of trauma has been represented in the novel as well. It describes the tradition of Sufi practices for recovering from the past with a bearable version of reality. Aslam’s novel foregrounds the traumas of the people who suffered from the War on Terror, terrorism and extreme violence in Pakistan and Afghanistan. The trauma of these people escapes the event-based model of trauma, and therefore remains under-represented in the Western literature and theory. He further said that the religious conscientious of the characters override the national consciousness and demands understanding outside the concept of nations. Taking a different position from Caruth’s, Dr. Azeem concluded that he takes trauma from this transnational position, unbound by the idea of nation states and boundaries.