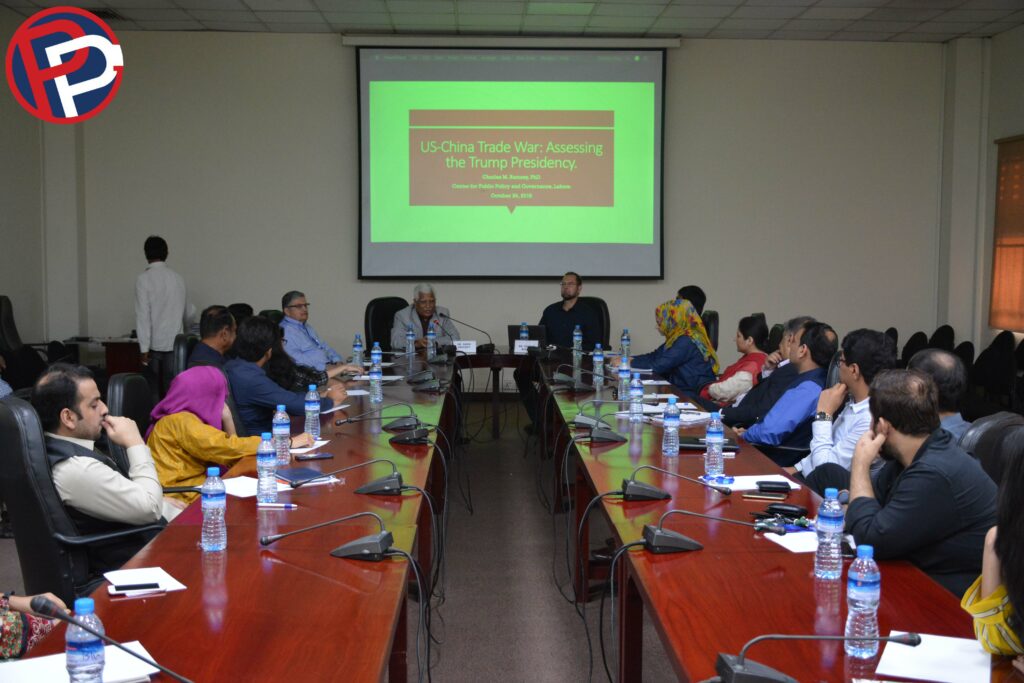 On the 24th of October 2019, the CPPG invited Dr. Charles Ramsey to speak on the “US-China Trade War: Assessing the Trump Presidency”. Dr. Charles Ramsey is Assistant Professor, Departments of History, Religion, and George W. Truett Theological Seminary, Baylor University – USA. Prior to this he held dual appointments as Assistant Professor of Religion and Public Policy at Forman Christian College (A Chartered University).

During his talk, Dr. Ramsey looked at the impact of the US-China Trade war on the global economy and the extent to which the trade war has affected China and the US local economies. He also looked at whether the US-China trade was was a well thought out strategy of Donald Trump to win the next US elections.

Dr. Ramsey explained that China is the world’s largest exporter and the United States is the world’s largest importer. They have so far been important pillars for the global economy.China has been called the workshop of the world since around 2001, when it became a member of the World Trade Organization (WTO). He described the main terminologies about US-China Trade War. A trade war happens when one country retaliates against another by raising import tariffs or placing other restrictions on the opposing country’s exports. A trade deficit happens when a country’s imports exceed the amounts of its exports.The Trump tariffs are a series of United States tariffs imposed during the presidency of Donald Trump as part of his “America First” economic policy to reduce the United States trade deficit by shifting American trade policy from multilateral free trade agreements to bilateral trade deals. Dr. Ramsey presented the three phases of tariffs. In January 2018, Trump imposed tariffs on solar panels and washing machines of 30 to 50 %. In March 2018 he imposed tariffs on steel (25%) and aluminum (10%) from most countries, which covered an estimated 4.1 percent of U.S. imports. On June 1, 2018, this was extended to the European Union, Canada, and Mexico. In separate moves, the Trump administration has set and escalated tariffs on goods imported from China, leading to a trade war. On December, 2018, Donald Trump imposed tariffs on meat production. China has responded in a tit-for-tat manner by imposing similar levels of tariffs on US goods. Analysis indicates that the impact of the tariffs on the average US family from a higher income bracket is around an additional cost of $600/year while for poorer families this is an additional $200/year. According to Dr. Ramsey this difference is significant because the tariffs impact the rich and not the poor of the country and this could indicate Trump’s acumen in carrying out economic policies.

Dr. Ramsey went on to say that trade wars, initiated by the United States, could do serious damage to the global economy as protectionist actions escalate internationally. Countries imposing tariffs and countries subject to tariffs would experience losses in economic welfare, while countries on the sidelines would experience collateral damage. If high tariffs remain in place, losses in economic output would be permanent, as distorted price signals would prevent the specialization that maximizes global productivity. He specified that trade wars are a side effect of protectionism, which are government actions and policies that restrict international trade. A country will generally undertake protectionist actions with the intent of shielding domestic businesses and jobs from foreign competition. Protectionism is also a method used to balance trade deficits.

Citing the book, Fear: Trump in the White House by American journalist Bob Woodward, Dr. Ramsey explained that many are overly suspicious about Trump’s ability to run the US Economy and believe he lacks the focus to attend to his presidential duties. The term Fear effectively describes the events and incidents happening between Trump and the White House staff which includes White House Chief of Staff John Kelly calling the president an “idiot” and the White House a “crazy town.

Dr. Ramsey stated that in the early days of the trade war, Trump was advised against setting high tariff and many economic advisors argued against them. Xi Jinping and Trump were even able to come together and determine a review period in which they would rengotiate their trade situation. However Donald Trump’s obsession with tariffs is based on one of his few core beliefs: winning. He thinks like a capitalist and will readily pursue confrontation to achieve his final objectives. This contrasts significantly from President Obama’s approach who was more of a consensus builder. Nonetheless, triggering a trade war between the world’s two biggest economies represents a huge gamble, ahead of next year’s US presidential election.