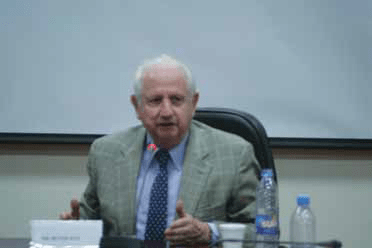 Ambassador Dennis Kux, Senior Scholar at the Woodrow Wilson Center in Washington, and author of India and the United States: Estranged Democracies (1992) and The United States and Pakistan 1947 – 2000: Disenchanted Allies (2001) was invited to deliver a talk on “Changing Dynamics of US–Pakistan Relations: Bad Marriage No Divorce” on November 15, 2011.

Kux opened his remarks by asserting that although US-Pakistan relations had been through many years of ups and downs and the dynamics of relations have changed drastically over time, still the basic factors remain coinciding interests in some domains, and interest and policy clash in others. Tracing the history of US-Pak relations, he started with the 1954 Mutual Defense Assistance agreement which provided military assistance to Pakistan for guarding itself against the communist threat. Baghdad Pact was signed the following year by Iran, Iraq, Pakistan, Turkey and the UK at US’s urging and promise of military and economic aid to the countries. In the Ayub – Eisenhower negotiations, Ayub had offered the services of Pakistani army to deter the spread of communism while agreeing not to use military aid against India. However, Pakistan had a concealed motivation to utilize the anticommunist agenda based American military aid to strengthen its army’s capability against India, and as future events unfolded, Pakistan went against the non-use against India agreement. From 1954-1959, a total amount of $503 million in military aid was provided on which the edifice of modern Pakistan Army was built.

He then identified and analyzed some events which resulted in the worsening of US-Pakistan relations. These included Kennedy administration’s support and emergency aid to India during the 1962 Sino-Indian war which upset Ayub, and the improvement of Pakistan China relations which irritated the US. The US-Pakistan relationship hit an all time low during the 1965 Pakistan-India war, when the US cut off military and economic aid to Pakistan. However, he argued that Pakistanis terming of 1971 war between India as “the great betrayal” was uncalled for because Nixon not just sided with Pakistan by declaring India as the aggressor but also did whatever was in his power to help Pakistan.

The 1980’s witnessed a reversal of this trend, as the Soviets invaded Afghanistan, the interest of the two began to converge although nuclear issue remained an eye sour for the US. Once the US was convinced that it had sufficient evidence that Pakistan was continuing to develop nuclear weapons, under the presidency of George H. W Bush, the Pressler Amendment was enacted limiting military and economic assistance to Pakistan. As a consequence, military aid including prior commitments was stopped abruptly holding up even the delivery of F16 fighter jets which Pakistan had already paid $463 million for, while economic aid and other ongoing programs in the pipeline were continued. Kux asserted that this was a hasty amendment, not properly thought through and “a mistake on our part”. This US attitude towards Pakistan could be explained by the end of the Cold War, which meant that Pakistan and Afghanistan were now off the US agenda.

Ambassador Kux then began his analysis of the current dynamics of US-Pakistan relations. He asserted that both countries shared a mutual interest in fighting terrorism. The disconnect however lay in the fact that Pakistan had not clearly declared its stance against or taken adequate measures to fight the Haqqani Network and the Afghan Taliban operating from within Pakistan. His second concern was the negative Pakistani public opinion about the US. Though some progress had been made to improve it, still there was no significant change. Equally, he remarked that the US public opinion about Pakistan was also becoming hostile. He pointed out that the Heritage foundation, a US think tank and policy institute had recently proposed that the US completely cut off aid to Pakistan and some congressmen also supported the idea of curtailing aid to Pakistan. In this regard, the Kerry Lugar Berman Bill was designed to impress upon Pakistan that the US was genuinely interested in Pakistan’s welfare and prosperity, and did not want a mere transactional relationship. With this bill, the previous military to civilian aid ratio of roughly 2:1 had changed to 1:2, and should expectedly lead to improved public opinion of the US in the long-term.

“With Kerry Lugar Berman Bill, the previous
military to civilian aid ratio of
roughly 2:1 had changed to 1:2″

In conclusion, Kux stated that both countries needed each other though for very different reasons. US needed Pakistan in the short term to keep supplies going to Afghanistan as other alternatives were too expensive. It also needed Pakistan in order to exit properly from, and restore and sustain peace in Afghanistan else billions of dollars spent and American lives sacrificed would be rendered worthless. Additionally US wanted to ensure the safety of Pakistan’s nuclear weapons because if terrorists got a hold of them, it would be disastrous for Pakistan, US as well as the rest of the world. Pakistan on the other hand needed US for economic aid, food support, and other development and humanitarian assistance. Pakistan’s military also required US support for fighting terrorism. Thus both countries needed each other and their interest would further converge as Pakistan became a stable democratic state.

The talk was followed by a question answer session. In response to questions regarding the nature of Pakistan – US relationship: did US dominated and dictated its terms? Were the countries’ policy alignment on the “War on Terror” the pivotal issue impacting Pakistan’s public opinion as in spite of extensive military and development aid, the public opinion in Pakistan was still largely against the US? Kux argued that the US did not properly define its terms of engagement with Pakistan after 9/11. While the US was paying the price it had negotiated and agreed with Pakistan, the US’s statement that it would pay for the war cost of Pakistan wrongly implied that the US was hiring Pakistan to fight America’s war. The US paid for Pakistani airfields it used and any Pakistanis employed to fight against the Afghan Taliban while the cost of war waged by Pakistani Taliban against the Pakistani state was Pakistan’s own responsibility. He stated that it was a mistake to view two countries as enemies or friends as countries pursued their national interests. The post 9/11, 17th of September Musharraf speech had clearly spelt out why it was necessary for Pakistan to join hands with the US in the “War on Terror”. Musharraf had stated that Pakistan’s economy was weak and could collapse, its nuclear assets were in danger, and if Pakistan didn’t join hands, India would. So it was in Pakistan’s national interest to align itself with US counterterrorism efforts as 9/11 was much larger in scale than the 1979 burning down of American embassy in Islamabad where four Americans had died and almost 137 injured. Regarding public opinion, he stated that one of Holbrooke’s goals was to change Pakistan’s public opinion through a beefed up public diplomacy program. The Kerry Lugar bill was a step in the right direction, was expected to continue and its programs including the Fulbright scholarship program, which was the largest in the world would definitely reap results in the long-term.

Kux further said that the US was no longer in a position to dictate as it had a weakened economic position and was going through a severe financial crisis. Even though the US spent more than any other country on the military, it had not been successful in overpowering the Taliban in Afghanistan. Though the US and Pakistani leadership now had a better understanding of each other’s interests after a decade of active interaction and engagement, they still needed to figure out the best way to deal with each other.

“From 1954-1959, a total amount of
$503 million in military aid was provided
on which the edifice of modern
Pakistan Army was built.”

In response to a comment about US-India friendship, Kux outlined the reasons that led to improved relations: one, the end of the Cold War led to changed dynamics as US was no longer concerned with Russia being the main arms supplier to India; two, the Indo-American community was one of the most successful and wealthy communities in the US and had served as a bridge between US and India leading to the development and growth of business relations between the countries. Additionally, US’s support for India’s position in the Pakistan provoked Kargil war had been interpreted by the Indian foreign office and strategic community as a change in America’s attitude. However, he argued that the India-US civil nuclear agreement was a “terrible deal” as Indians had yet to come up with a liability law that was satisfactory to American companies. Overall, US wanted to establish good relations with both sides.

Answering a question, why the US had not played a role to solve the Kashmir dispute despite its success in resolving water issues through the Indus Water Treaty, Kux replied that the nature of the problem was different as water issue was physical and vital while Kashmir issue was existential and emotional. The Indus water treaty had also taken seven long years of negotiation with World Bank playing a key role. While the US had initially tried to solve the Kashmir dispute without success, it had realized by 1962 that unless both parties were willing, third party interference in negotiation would not be productive. Still, the US had time and again tried to push both India and Pakistan to have bilateral negotiations on the issue.