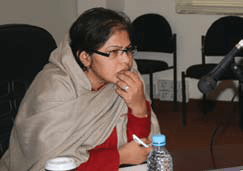 : Dr. Ayesha Siddiqua, a former civil servant, currently an independent security analyst and author of Military Inc.: Inside Pakistan’s Military Economy was invited to deliver a talk on Crises of Governance: Changing dynamics of Civil Military Relations at the Centre for Public Policy & Governance on the 10th of December 2009.

Siddiqua began her talk with a quote from a Pakistani ambassador “Transitionists had won the elections” highlighting the difference between transition and transformation. She raised the question “Was Pakistan slowly and gradually moving towards military rule and would military rule be acceptable again?” To address this question Dr. Siddiqua structured her talk around four factors; the military, political parties, civil society and the power structure in relation to civil military relations.

Siddiqua categorized the military as the only surviving institution of the country with its own economic and political stakes, international partnerships and the ability to play politics and manipulate the geo-strategic situation. Military was a thinking institution, which adapted and evolved by learning from its past experiences. For example, the last military dictator had called himself a Chief Executive rather than a Chief Martial Law Administrator, only temporarily suspending the constitution rather than getting rid of it all together, while adopting the same old tactic of using a set of politicians.

Military’s primacy in politics and decision making were now an established fact. The army had carved out this place in the country’s power politics institutionalizing it formally through the 2004 National Security Council (NSC) Ordinance. It had acquired the sensibility that it represented Pakistan, alone understood Pakistan’s interests and should shape the country’s policies while ignoring the fact that even within the Parent Guardian Military Model, Pakistan Military’s post colonial institutional paradigm differentiated it from the Turkish Military which was instrumental in the creation of the Turkish state.

Since the last elections, the army had been skillful in improving its public image by standing up against the Taliban onslaught and by also challenging the US drone attacks on Pakistani soil. With reference to Afghanistan she asserted that Pakistan military had attained a pivotal position. If the Americans could not stabilize the situation in the next year, they may decide to leave the Afghanistan mess with the Pakistan military. Such a scenario according to Dr. Siddiqua begged the question “Would the military come back to power again and manipulate society and the political system?”

Dr. Siddiqua argued that political parties lacked the capacity to improve the current civil military balance. Politicians had not been able to devise a viable strategy to push back the military in the last 50 years primarily because of a complete lack of an institutional framework. No one had tried to redress the balance by strengthening civil institutions. Case in point was the Ministry of Defense, a civil institution, which instead of improving the civil military balance had instead become a military dominated institution. She maintained that politicians had used different tactics while dealing with the military. Zulfikar Ali Bhutto had humiliated the army chief while building the army thinking that the institution would look up to him. Benazir Bhutto learnt to keep out of what made the military unhappy but couldn’t manage it for too long. Nawaz Sharif tried to buy the military by dividing its leadership but had limited success. President Asif Zardari had instead tried to change the discourse. Though it was too soon to tell, still initial tries had not borne fruit. The Kerry Lugar Bill meant to engage and empower the civilian government was in consonance with the demands raised during the lawyers movement. Similarly civilian control of the ISI could establish the civilian supremacy. But both had been met with hostility by the media and civil society. She argued that constant focus on the NRO was meant for disempowerment of the President through constitutional changes or destabilization of the government under the pretext of corruption. She re-iterated that transition to democracy was extremely problematic. Corruption tended to increase in the middle period when a country was transitioning to democracy as political parties increased their patronage base. Corruption and misuse of resources was likely to persist till such time that the system matured, and this required that it survive the teething period.

Civil Society, she argued was divided both horizontally and vertically, and was not yet prepared to make a transition from military to civil rule. The society had changed dominated by strife and conflict on the one side, and a semi-consolidation of a strengthened brand of nationalism benefiting right wing forces on the other. It was now militarized to the extent that the civil society seemingly preferred order and discipline rather than the perpetual negotiation oriented culture of politics. More importantly, the media rather than acting as a watchdog had instead become an active player in politics. It constantly manipulated information, conducted bias presentations and raised false expectations about the political system.

“… power system was structured such that benefits accrued to the king maker rather than to the public while the king was mostly symbolic and often replaced.”

Lastly, she argued that Pakistan’s basic power structure remained authoritarian in character and outlook. The power elite was driven by short term gains rather than long term interests. This elite never ran out of ideas to use the military to its own advantage keeping the military relevant rather than going into permanent negotiations among themselves to strengthen the civilian domain. Thus the power system was structured such that benefits accrued to the king maker rather than to the public while the king was mostly symbolic and often replaced. Media, which had gained a sense of power was the recent addtion to the kingmaker class. It guided opinion, stabilized or destabilized a government and was now a possible partner of other kingmakers.

Answering a question “If military’s dominance was also an outcome of the permanent constituency it enjoyed among the Punjabi-Mohajir middle class?” Siddiqua agreed stating that the concerned middle class was nationalistic with an Anti-India orientation, socially it was very conservative and its commercial groups also funded Jihadi organizations. This was in agreement with military’s anti-India and singular national identity framework. She argued that the military also desired a middle class alternative to the current feudal dominated political class and insinuated that a hidden hand was behind the recent MQM entry in the Punjab. She argued that both MQM presence in Punjab as well as new Bahawalpur and Saraiki speaking provinces would be acceptable to the military establishment. Just as MQM could never become a majority party and thus be dependent on some other power base. Similarly, she claimed that political leaders of the new provinces would remain regional players with little chance of evolving into powerful politicians able to challenge the military.

Summing up her arguments Dr. Siddiqua said that democracy was a political system built around multiple stakeholders negotiating power and distribution of resources (including minorities). Instead the Pakistani political system was authoritarian in nature dominated by the dynamics of a praetorian society, which according to her had socially regressed. There was no substantive change in the overall political system and Pakistan continued to be a mercenary state with an imbalance in its civil military relations. In the current scenario where all civil institutions of the country had been ruined, military could only be challenged at the intellectual level, thu s a dire need to conduct a thorough cost benefitanalysis of the relevant strength of different institutions. The only recipe was to re-imagine the Pakistani State itself where civilians were allowed to learn from and correct their mistakes, because to strengthen the political system it was important to ensure the continuation of the system itself. Re-defining civil military relations required behavioral transformation of stakeholders to sustain any meaningful transition to civilian rule.

To give students of Executive MA in Public Policy a flavour of how young and emerging executives, policy makers, practitioners and experts are working to promote publicprivate partnership, the CPPG has initiated a stream in Seminar Series, whereby promising young leaders are invited to share their experiences, challenges and opportunities as they choose and build their professional careers.