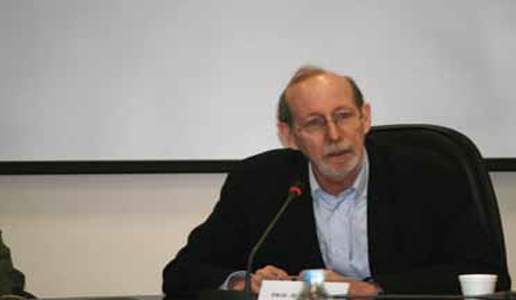 Jean-Luc Racine, CNRS Senior Fellow, Centre for South Asian Studies at the School for Advanced Studies in Social Sciences and Associate Fellow at the Asia Centre at Sciences-Po, Paris was invited to deliver a talk on “Emerging India and Asia’s New Dynamics” on February 8, 2011

Professor Racine began his talk by stating that Asia was on the move with tremendous growth and change taking place in India as well as China. However, China was progressing at a much faster rate than India and this differential was widening. Thus to say that India was emerging was not necessarily putting it in the same club as China.

Exploring the history of India’s economic and societal progression, he stated that by the late 80’s, India had transformed into a postcolonial country. Till the 1980’s, India followed a system of mixed economy under protectionist barriers with the state playing a significant role where the market could develop only up to a certain point. This economic model led to extreme bureaucratization and ran out of steam by the late 1980’s. In 1991, the then Finance Minister of the new Congress government, Manmohan Singh initiated wide ranging economic reforms. An interesting aspect of these reforms was that persons responsible for initiating and implementing them had been part of the older system. Thus the turnaround of India’s economy could not be considered as an outcome of an economic revolution, a change in regime or of international assistance. On the contrary, the momentum for growth was internally generated and sustained through the years. Reforms were implemented gradually at a pace that matched the capacity of society to absorb them. The other key event that marked the 1990’s was the nuclear test by India in May 1998. In the context of the 1995 Non-Proliferation Treaty (NPT) with signatories from all over the world, the nuclear test was against international trends. So while liberalization of the economy was in tune with the times, the nuclear test was globally unpopular.

Discussing the outcomes of the 1990’s economic reforms, Racine stated that India’s GDP growth depicted mixed trends in the first decade. In the first five years (1991-1995), growth only increased from 5% to 6.8%, which was not a dramatic rise. In the following five years, growth rate dropped back to 5%. However post 2000, economic indicators showed consistent improvement while a dramatic improvement occurred after 2004, when the growth rate rose from 7.5% to 9.6% in 2007. The economic crisis in 2008 brought growth down to 6.8% but the recovery was quick and growth went back up to 8.5% in a year’s time.

As a result of this consistent economic improvement post 2000, there had been a change in the perception of India not only in the East but also in the West. In 1996, five years after economic reforms, ASEAN countries decided to give India, the status of full dialogue partner. By the end of 2005, a new regional body was constituted in Asia Pacific called the East Asia Summit and despite China’s objections, decided to bring India on board as the founding member. India thus became a significant part of the system of representation of Asian countries while in the perception of the West, India rose to prominence as a vital part of an emerging and dynamic Asia.

Racine argued that the change had not just been on the economic front. By 2000, India had established itself as a “post-colonial” country through a transformed mindset and he referred to Manmohan Singh’s 2005 speech at Oxford which symbolized this new mindset. In his speech, the PM had stated that the Indians were right to fight against the British at the time of independence, but that time had now passed and the nation must move forward. Further, that Indians were now confident enough in themselves to digest the time of colonization, and look into the future with confidence. Racine stressed that this transformed mindset and self-perception proved to be decisive for India’s progress. It helped build confidence among leaders as well as civilians, and created a momentum for economic growth as well as societal progress gradually leading India to transform itself from a regional actor to a global player. India’s notable services success stories also played a symbolic role as Indian IT companies emerged as global actors in a field which was the epitome of modernity while India’s industrial sector particularly energy sector companies were fast transforming into dynamic multinationals.

“…India was emerging as a global
power despite the persistence of some
serious economic, social, political and
foreign policy challenges. “

He then highlighted some of the challenges and problems. Although reelection of Congress in 2009 was the first time in Indian political history that a government had been reelected in the general elections, its second mandate was not running as well. Its motto of increased growth had come under severe criticism in recent times with the objection that higher growth was only benefiting the privileged class and escalating income inequality while soaring inflation was creating growing unrest among the masses and fermenting resentment towards the government. But amidst these numerous internal problems and continued tension with neighbors, the fact remained that India was still making progress as its economy moved at an accelerated pace. This implied that decision-makers had decided to answer two very significant possibility questions in the affirmative: one, whether a country could be classified as an emerging country without having eradicated poverty which stood at 25% according to World Bank’s $1.25 a day definition; second, could a country play a growing international role despite tensions with its neighbors. He suggested that India’s growing global significance in the international arena had demonstrated that it could move forward despite disharmony with bordering states. Thus India was emerging as a global power despite the persistence of some serious economic, social, political and foreign policy challenges.

Racine then proceeded to analyze India’s relations with US and China. Historically, India’s refusal to be a signatory to the NPT had also portrayed a negative image to the West. But after the 1998 nuclear test, India became a target of Western and the US condemnation and the Clinton administration imposed sanctions to discourage nuclearization while their mutual dialogue bore no substantial outcome. However relations took a new turn when George W. Bush became U.S. President as he and his team of neo-conservatives made consistent efforts to bring India to the forefront. The countries’ engagement and three years of negotiations on the nuclear issue led to the U.S.- India Civil Nuclear Agreement in 2005 which was one of the most important milestones in US-India relations. Two points underlined this neo-conservative push: one that India was a parliamentary democracy and had a good record on nonproliferation; two, that establishing links with India would help the US to counterbalance the rise of China. However, Indian government’s stance was not pro joining hands with the US to contain China. While India – US ties were strengthening, there was a simultaneous sustained attempt by India to normalize its relations with China which complemented a similar rethinking on the part of the Chinese government. The outcome had been a considerable increase in bilateral India-China trade which hit a record high in 2011 amounting to $ 73.9 billion. Although there was significant trade imbalance to the benefit of Ch¬ina, strategists were trying to address it and move forward.

“…Indians were now confident enough
in themselves to digest the time of
colonization, and look into the future
with confidence. “

In conclusion, Racine shared a remark by former Indian Foreign Secretary Shyam Saran, who said “For India, the goal is not to be at parity with China, but to be in a position of power where no important decision related to Asia or for that matter global issues, could be taken without it.” Explaining, he stated that India’s strategic goal was not parity with China, but to have a say in regional and global affairs. Discussing India – Pakistan relations in this context, he stressed that it was important for Pakistan to recognize and understand India’s growing global significance and a transforming society and mindset. Although Pakistan had had a history of difficult relations with India, still it needed to establish a sustainable relationship that was mutually beneficial to both countries.

…in the perception of the West, India
rose to prominence as a vital part of
an emerging and dynamic Asia. “

In response to a question regarding the impact of India gaining a permanent seat on the UN Security Council (UNSC), on South Asia and specifically Pakistan, and the possibility of a healthy dialogue between two nuclear powers, Racine said that a UNSC seat had more of a global prospect rather than a regional one. Thus India’s inclusion would not have any immediate impact on South Asia, nor dramatically change the relationship between India and Pakistan. He said that in theory nuclearization played an equalizing role and could in fact help in confidence building and dialogue promotion among countries.

Responding to a question about why India did not allow or encourage Western powers to engage in third party mediation to resolve the Kashmir issue, Racine clarified that the U.S. had officially stated its unwillingness to provide mediation for the resolution of Kashmir issue. Thus it was not the Indians but the Americans who were not willing to interfere or provide mediation.

Answering a question regarding Indian’s perception of Pakistan, Racine stated that a small segment of Indians viewed Pakistan in an extremely negative light. A larger segment though was neutral but turned negative when provoked by terrorist attacks in India by Pakistani terrorist groups. The civil society represented the segment which was interested in proactive dialogue. Overall though, there was a clear recognition by a sizeable majority of Indian people and decision makers that greater the instability within Pakistan, higher the security threat for its neighbors. So majority of Indians wanted Pakistan to be a stable country that was at peace with itself and internationally.