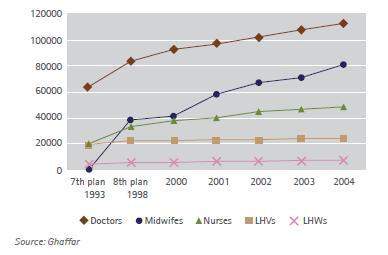 Dr. Nabeela Ali, the moderator of the session began by defining the issue as multi-sectoral encompassing education, health and population, catering to the needs of a healthcare delivery system. She argued that the main issue was a lack of evidence based strategy bringing together the supply and demand sides to cater for the existing and changing burden of disease. She exemplified it by stating that 8.7 million more women would be of reproductive age by 2015, but no coordinated strategy was either in place or being worked out to provide healthcare requirements through para-medical staff, Skilled Birth Attendants (SBA) and doctors to this effect.

Dr. Ghaffar started his presentation with the worldwide scenario, a global shortfall of 4.3 million healthcare workforce including 2.4 million healthcare workers (doctors, nurses, paramedical staff and SBAs) and 1.9 million management support staff. Pakistan was one of the 57 countries with a critical shortage. Where heathcare worker density exceeding 2.5 workers per 1,000 was considered adequate for achieving 80 percent coverage of measles immunization and attendance of SBA, in Pakistan, the physician density stood at 0.748 while of nurses at 0.319 per 1,000. By 2015 with Pakistan’s population at 200 million, for a ratio of 1 doctor per 1,000 citizens, 200,000 doctors would be required while current production stood at 5,000 per annum. The nursing profession is even more neglected as we are not at all equipped to fulfill our need of 60,000 nurses by 2015 as the annual production is even lower at 2,500 per annum. (put graph here)

Ghaffar’s research showed that maternal, infant and under-5 mortality decreased significantly with increase in healthcare worker density but the right mix of healthcare providers was as important if not more. Unfortunately in Pakistan, successive governments had equated healthcare workers with doctors, which was completely misplaced. In reproductive healthcare, the 1st three days after delivery were the most critical as 70-75% infant deaths took place during this period. Not only doctors but more importantly nurses, paramedical staff and SBAs were required to bring down Maternal (MMR) and Infant Mortality Rates (IMR) in this period. He corroborated it by showing a clear differentiation in use of family planning methods and antenatal services in areas served by Lady Health Workers (LHW). In areas served by LHW, the IMR was reduced to 50 per 1000 live births, compared to the national average of 77.9. But unfortunately the ratio between doctors and paramedical staff was divergent in Pakistan, with the focus still on producing doctors while the number of Lady Health Visitors (LHV), midwives and nurses was stagnant. Maldistribution is not just restricted to healthcare workers but extends spatially as well as to the very structure of the healthcare system. Past figures show that 80% doctors practiced in large or medium urban centers.

Dr. Wajid’s study showed that SBA usage differed drastically between urban at 59.2% and rural at 32.3% even though the SBA need perception differed little with 92% and 82% in urban and rural areas respectively highlighting both a general lack of access as well as an urban bias.

It is disturbing to note that, there has been no change in the distribution of health services for the last 20 years. It is noteworthy that 90%, 9% and 1% of the population is served by Primary, Secondary and Tertiary Healthcare respectively, while, their public expenditure share is 15%, 45% and 40% respectively. In Khan’s opinion, even the existing first level care services are not necessarily based on the Primary Healthcare (PHC) spirit as they have a clinical bias with a doctor driven design and a patient doctor relationship orientation.

The panel also highlighted Knowledge as an important factor affecting Human Resources (HR) in health. They argued that awareness among married women was low with almost 29% having absolutely no knowledge of danger signs in a pregnancy. It is significant that SBA usage increased from 28.6% among illiterate women to 53.4% among women with 1-5 years of education. Thus knowledge was the answer not just for supply but also the demand side. Wajid though had a word of caution for researchers and policy makers to base their analysis on contemporary situations. Giving an example of district Jhelum, he stated that while original district boundary was based on the river, bridge building in recent times had changed usage patterns. Thus research and policy design based strictly on district boundaries would be wrong owing to facility usage in other districts just across the bridge. It is equally worrisome that the curriculum in medical institutions (nursing and doctors) has not kept pace with changing times. It remains technologically outdated with little relevance to domestic needs.

Khan argued that economic opportunity is now the biggest barrier in health provision due to a decreasing role of the Public Sector. Institutional distribution of patients seeking treatment attests to this thesis showing the dominance of Unskilled Birth Attendants and the private sector while 35.4% of rural residents go without any treatment at all. Ghaffar agreed arguing that while there is no lack of donor funds, the main cause of Health HR crises has been the lack of macro level policy planning which follows a coherent philosophy.

Participants collectively proposed a vision of transparent, inclusive and participatory policy based on long term population demographics and disease burden, worked out with the involvement of all stake holders including medical, nursing and health worker colleges, research bodies, service delivery NGOs and Ministries of Health, Population and Education at the federal, provincial and local level.

The general framework for designing and managing HR for Health is to assess the availability of healthcare workers by taking into account the inflow through education and in-migration and outflow through retirement, death and out-migration. Ghaffar put great stress on what he described as a Healthcare Management System which allows planning inclusive of Policy, Finance, Education, Leadership and Partnership. Additionally critical success factors based on a specific demographic reality and disease burden have to be defined.

Khan articulated that the current design of healthcare system was developed in the late 70s & early 80s and required a complete overhaul. There is no well defined HR Health policy. The Ministry of Health (MoH) does not have a single unit responsible for HR development which could design a HR Action Framework. He lamented that even the existing workforce is not being used properly because of faulty planning capacity and poor governance. Additionally Pakistan Medical and Dental Council (PMDC) has been totally politicized leading to its deterioration like most other institutions of the country. He argued that MoH’s governance can be gauged simply by observing that it has had five secretaries transferred in the last 4 years.

Ghaffar stated that multiple strategies were present to adequately use the existing skill set. We gave an example of Task Shifting such that in the American Midwest, Physician Assistants rather than doctors took care of most medical needs. Similarly in the UK, the General Practitioner rather than a specialist doctor was the first point of contact while specialists usually had a long waiting period. Thus countries made the best use of available resources to construct their healthcare systems. For a new workforce, he suggested a general scale up in addition to forming multipurpose healthcare workers with extra attention to essential categories based on the disease burden.

Participants disagreed on whether retention was a big issue. Khan argued that the flow of HR was in the direction of countries with demand supported by financial incentives and an institutional infrastructure. Retention of the brightest doctors could only be restricted through coordination of regulatory framework with other states and provision of comparative incentives & rewards. Although the number of doctors registered with the Pakistan Medical Council (PMC) was 127,000, exact number of practicing doctors was unknown as no regulatory framework supported keeping a count of the outflow. He speculated that the actual number could actually be half the registered amount.

Another important need was coordination between federal and provincial ministries, development partners, and regulatory bodies such as PMC, Pakistan Dental Council, Nursing Council and the Higher Education Commission (HEC). Participants argued that civil society including research bodies like Population Association of Pakistan (PAP) had to now move beyond analysis and advocacy to action and seriously lobby the government for change.

Mushtaq even suggested de-linking LHW from polio and TT vaccination campaigns which take a significant portion of their time and have greatly improved because of their involvement, in case of TT vaccination from 30% to 60% coverage. He argued that LHW should singularly concentrate on community and maternal healthcare at the PHC level, the Basic Health Unit (BHU) should be drastically improved allowing LHWs to link it to the community which currently bypasses it to go to a private clinic. His point was reinforced by Wajid’s results indicating that family was the single most important deciding factor to use a midwife (Dai) at 34% while 35.4% used a Dai because of prior experience. Proximity, knowledge and cost were the other main reasons.

The results of Talukder’s study comparing service delivery models from Pakistan, Bangladesh, Ghana and Cambodia recommended that community involvement was fundamental to effective and accessible PHC because it mobilized community leaders in local health service planning, development and management; trained community members to provide health education and basic health services building their skills for future interventions; delivered targeted services effectively through self selected female community health workers; and because it established linkages between community health workers and the functioning local health system. Most importantly a community based health system was best placed to meet the needs of the remotest segments of society.

“Participants suggested reorientation of investment in PHC, thus inverting the current investment pyramid. WHO suggests that half of all HR for health be focused on PHC”