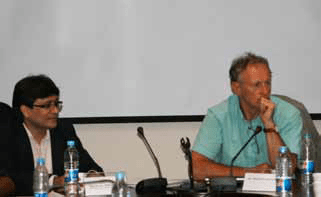 Michael Dawny began the talk by stating that higher education was in a state of crises in Europe as well as globally. For governments and institutions to solve this crisis, they needed to clarify the purpose of higher education by asking: What kind of education training was being provided? What was its purpose? What exactly was the knowledge economy in which governments and institutions invested?

Dawny then shared the Bologna Declaration initiated through a debate about the purpose, objectives and direction of higher education among the higher education ministers of four countries which in a twelve year process extended to the European Higher Education Area (EHEA) covering 57 countries (it also included countries outside the European Union). The key principle of the Bologna Declaration was the absolute vitality of higher education in the European Union. The aim was to make education more comparable and compatible throughout Europe. The declaration made higher education a public good; enhanced role of the state in funding and oversight, and pronounced students as full members of the higher education community. This encouraged the role of student unions in the formulation of education policy. The reasons underlying it were education’s role in developing economic strength, social and human growth, shared values and a common socio-cultural space; the open mobility of human resources in Europe which required a uniform education system; and promoting Europe as the hub of education worldwide as its educational standards’ did not match standards of UK, USA, Australia and Canada which had been major importers of international students generating significant economic benefits for these countries. The growth of universities particularly in the UK had been heavily dependent on the recruitment of international students which other European countries also wanted to attract and thus it was important for all EHEA universities to develop a consistent product which would be equally attractive for students.

The implementation process of the Bologna Declaration was very complex because it involved the higher education policy of more than 27 nations. Over the years the group extended to also include non-Europeans nations as countries realized that the process would help develop their education systems and make it more competitive, provide their students international mobility and increase job opportunities in the global economy. Originally a 10 year process was envisioned with ministerial level meeting every two years to further develop EHEA principles. An approach was adopted to transform, improve and align the education systems through the systemic implementation of rules called the “Action Lines”. Dr. Dawny elaborated the Action Lines in the following manner.

Given the qualifications duration in Europe varied significantly across countries. For instance, undergraduate degree duration ranged from 3 to 7 years hence a need for structural comparability in qualifications for comparability and compatibility of education. All signatories agreed to a system of cycles of learning, a maximum of four year Bachelors being first, 1-2 year Masters second, and 3-4 year Research Degree/Doctorate third. Thus the cycles had particular descriptions, were time limited and also had a fixed number of credits. One academic year was considered equivalent to 60 ECTS, a common system of credits known as the “ECTS” grading scale was put in place. Additionally learning outcomes at each cycle were clearly defined both generically and in subject terms. All members were required to develop and then register their Quality Assurance Agency with the European registered entity and comply with the central principles of quality assurance ensuring that a student’s generic skills were the same regardless of where in Europe he/she undertook the degree.

”…comparable qualification framework, credits, learning outcomes and quality standards maintenance mechanisms had to be in place for any globally recognized education system…”

Although the initial goal of the Bologna process was to increase mobility of workforce within Europe but gradually international mobility became the focus as many counties outside the EU signed up leading to the internationalization of the curriculum. Secondly, the qualifications framework extended beyond the three cycles to include the pre-Bachelors level. Third, important principle enshrined in the process was that learning did not take place only in educational institutions but also in the workplace which accounted for 70% of the learning in post qualification stage. Thus the same framework was also used to measure workplace learning. He further argued against what he called the “fallacy of a clear division between vocational and academic education”, implying that many higher professionals who had gone through extremely torturous academic programs were actually highly vocational such as doctors and lawyers. All learning was learning.

Dawny concluded his presentation by discussing the main lessons that the global knowledge village could draw from the European experience. He argued that comparable qualification framework, credits, learning outcomes and quality standards maintenance mechanisms had to be in place for any globally recognized education system and it was immaterial whether it was done at provincial or national level. Experience of various international capacity building projects suggested that this could not be achieved without institutional reforms, meaning that the system of governance and the system of finance had to change. Though a debate did exist between autonomy of schools/faculties and the centralized control necessary to maintain quality through MIS, it should be an accepted challenge for the universities. He suggested that although developing comparable frameworks increased mobility, it was for the State to decide how many students it wanted to export such as Pakistani doctors to the UK or how many graduates in particular subjects it wanted for its own economy. International employment was a factor of national resources invested in an educational system while the state could also constrain mobility through markets or control, but not allowing students to take employment outside could lead to isolation. Pushing his final thoughts, he claimed that government’s control over direction and purpose of higher education was directly linked its funding of higher education as in privatized universities, students as consumers pressurized universities to deliver a better product. He called for active student participation in university governance at the very highest level, as it was their future.

Bilal Ahmad Butt opened his remarks by pointing out the basic dilemma of Pakistan’s higher education sector as a lack of clarity whether education was a public, private or a merit good given Pakistan’s education expenditure to GDP ratio was the lowest in South Asia. He was up front in stating that, there was a National Education Policy 2009 which provided a strategic vision but lacked an operational plan. Referring to Punjab, Mr. Butt said, there was no provincial education policy but a medium term development framework (MTDF) which set provincial priority areas for higher education. He candidly observed that Pakistan’s higher education sector issues included a poor learning environment, quality of faculty, obsolete curriculum and a high student-teacher ratio. There was a lack of professional higher education managers, no system for evaluating learning outcomes and no connection with the job market as graduates were being produced without demand assessment of the domestic, regional or global markets. The enrollment transition from intermediate to higher education was only 11.9% while political interference was rampant. He also pointed out that there was no institution for the training of college teachers or for the capacity building of education managers in Punjab.

Returning to the education policy, he said the underlying objectives of the national policy were equitable distribution across areas and gender, enhanced access for underrepresented groups, greater compatibility with international standards, faculty development and retention of qualified faculty against the main challenges. These included equitability, increasing the current $18 per student per annum education expenditure, improving infrastructure, updating curriculum, developing faculty and encouraging research. Thus the national policy was merely a strategy vision without an operational plan—while provincial MTDF areas were chosen without proper planning, thus the combined effectiveness was limited. However he was all praise for the Higher Education Commission (HEC), established in 2001 as an independent commission under the Prime Minister with the aim to upgrade universities and to align learning objectives with governmental needs. HEC was well funded and spent Rs. 97 billion during the period 2002-2010 as compared to Rs. 7.5 billion spent by the University Grants Commission during the 24 year period of 1978-2002. It initiated programs to revise the curriculum, conducted faculty development, encouraged research, hired foreign faculty for PhD programs in Pakistan, regularized four year bachelor program in line with international standards, introduced quality assurance methods and provided digital library and videoconferencing facility to all universities. In total it awarded about 5,000 foreign and 3,000 indigenous PhD scholarships. He considered HEC to be a successful government body which was the primary reason why it was not abolished as dictated by the 18th amendment because the academic community resisted and Punjab thought that it lacked the capacity to replace it at the provincial level. He concluded by suggesting that a provincial higher education policy needed to be formulated.

In response to a question regarding the impact on UK’s higher education quality following privatization of education, Dr. Dawny commented that the existing quality assurance frameworks would continue to ensure high educational standards. That the less competitive universities would shrink or close down, however, it would not affect the majority of universities attended by overseas students except that the new immigration law which reduced the duration of work permit after graduation for international students from two years to one year. That may restrict number of overseas students inducted by British universities.