Home>Hydro politics of the Indus Waters Treaty: Baglihar and Beyond

Hydro politics of the Indus Waters Treaty: Baglihar and Beyond 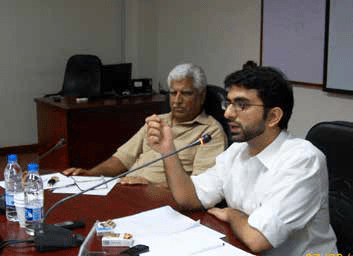 Majed Akhtar, PhD candidate in Geography at the University of Arizona was invited to deliver a talk on “Hydro politics of the Indus Waters Treaty: Baglihar and Beyond” at the Centre for Public Policy and Governance on July 25, 2012.

Akhtar began by making a bold and somewhat different statement that Indus Waters Treaty was a development document, oriented towards the most efficient and profitable development of the river. With a focus on sustainable development, it aimed to ensure that the project continued to be profitable in the long term. More importantly, it must be recognized that the treaty was not designed for the protection of downstream position of Pakistan, but rather towards finding the most economically efficient way of utilizing the river resource.

Elaborating on his perspective, Akhtar said that he had used World Bank archives to trace the history of negotiations leading to the signing of Indus Water Treaty, and proceeded to read out and analyze quotes from these archives to provide a historical context of the treaty. This analysis showed that the Indus water issue was treated as a business and engineering issue, rather than a political one. Pakistan’s vulnerability due to its downstream position was overlooked and Pakistan’s geopolitical fears suppressed. The negotiation process was carried out by experts who were considered neutral and apolitical. As most of the experts involved in drafting and negotiating the law were engineers and technicians, the talks amounted to technical deliberations while political concerns if any were kept aside.

He disagreed with the current stance of engineers on the treaty and Indus waters, which often argued that the treaty had been successful primarily because it was apolitical, and that Pakistan hadn’t utilized the river’s water resource efficiently because of lack of technical capabilities and engineering skill. Instead, he made a case that the apolitical nature of the treaty had left Pakistan’s geopolitical downstream fears unaddressed. Through the Indus Basin Development Agreement (IDBA), the international community had amassed monetary funds to build two large dams, Mangla and Tarbela, as an attempt to engineer away Pakistan’s downstream position. After these dams were built, it was said that Pakistan was no longer vulnerable in its downstream position as if downstream fears were supposed to be allayed by infrastructure and replacement works. However, this offering of technical solution to a social problem had left the underlying issue unresolved, to be dealt with another day.

Elucidating the Baglihar dam case, he explained that the Baglihar dam was located on the Chenab river; about a 100 miles east of the Pakistani border, at the same latitude as the Mangla reservoir. It was a run of the river project, a form of hydroelectric generation in which a limited amount of storage reservoir called Pondage or no water storage was required. The minimum storage reservoir served to regulate water flow and prevent power fluctuations due to irregular river flows. He then proceeded to carry out a socio-legal analysis which looked at the principles determining the decision concerning the construction of the dam. Pakistan had reservations regarding the construction of Baglihar barrage as it considered the project to be in violation of Indus Waters Treaty. Annexure D of the treaty delineated hydroelectric uses of the dam and paragraph 8 of Annexure D discussed setting up of new run of the river projects.

“… complaints lodged by Pakistan regarding the Baglihar dam decision were of size and spillways.”

Pakistan had submitted that India was in violation of certain provisions of the treaty. The two groups of complaints lodged by Pakistan regarding the Baglihar dam decision were of size and spillways: one, that the size of the Baglihar dam was too large; two, that the spillway should not be gated as a gated spillway would allow the dam owner to have undue control over the water, and additionally that the spillway was positioned too low which again gave greater amount of water control to the upstream party. He explained that a spillway was a structure used to control release of flows from a dam into downstream area. Spillways released floods so that the water did not overtop and damage the dam. Regarding the reservations, he suggested that the release of water should be an automatic process whereby as soon as the water exceeded a certain level, the surplus would flow into the spillway, while the second Pakistani reservation argued that the spillway should be positioned at a higher level. It was thus evident that Pakistan wanted to limit India’s control over the waters as its reservations manifested typical downstream geopolitical concerns, the degree of control and uneven power relations. However, Pakistan was trying to make geopolitical claims under a treaty that was a technical development oriented treaty whose logic was efficient development of the river waters.

“Pakistan wanted to limit India’s control over the waters as its reservations manifested typical downstream geopolitical concerns, the degree of control and uneven power relation.”

Akhtar then proceeded to discuss the policy conclusions drawn from his analysis. He contended that the internationalization of water issues was not an appropriate strategy for Pakistan for the resolution of its water disputes with India. He explained that international law could be defined as an etiquette between states as countries first needed to accept and agree to the law before being subjected to act according to it. The main principles in international water law were equitable utilization of water, territorial integrity and downstream protection. However, over the past half century, priority was given to development of river over downstream concerns. This trend was evident in the Indus Waters Treaty and the Baglihar decision. Thus, internationalizing the debate implied that Pakistan’s geo-political downstream concerns would be left unaddressed. He also argued that the Baglihar decision would be a precedent for future interpretation of Indus Waters Treaty and decision-making on Indo-Pak water issues.

He argued that the theoretical meaning of downstream needed to be rethought and reconsidered. Currently it was looked at merely as a physical phenomenon. However its interplay with politics and economics rendered it more as a multilayered and multi-dimensional term. It was pertinent to explore the nature of engagement between other upper and lower riparian states in the world like, Israel and Jordan, Egypt and Sudan, and Pakistan and Afghanistan. Therefore, we must historicize the term’s semantics and implication in the political and economic context, and reconsider the role of downstream in international law. Issues of communities that were suffering due to their downstream position needed to be highlighted and brought to the forefront with a focus on human rights and environmental law. Downstream needed to be looked at in terms of inequality, not only between states but across social groups and individuals.

In conclusion, he reiterated that the Indus Waters Treaty favored capitalist development of the river and was geared towards profit-seeking, and increasing the measurable economic value of rivers and structures. Thus it is not in Pakistan’s interest to internationalize its water disputes and expect a geopolitical solution from a technical and economically driven treaty.

“Downstream needed to be looked at in terms of inequality, not only between states but across social groups and individuals.”

Discussion followed in the question answer session. In response to a question regarding Pakistan’s prospects for development in the Indus Waters Treaty, Akhtar stated that the Indus Basin Development Agreement (IBDA) was a development plan and a supplementary part of the treaty. It led to a large monetary influx into Pakistan, which was utilized to set up dams and to form the institution of WAPDA.

Replying to a comment on possible bilateral solution to Indo-Pak water disputes, he said that traditionally India had endeavored to resolve water disputes bilaterally. Pakistan however had opted for mediation by a third party. He argued that Pakistan should choose to keep the issue bilateral as that was in Pakistan’s long-term interest. Internationalization of the issue did not go in favor of Pakistan as the Indus Waters Treaty did not ensure Pakistan’s downstream rights.

“…the internationalization of water issues was not an appropriate strategy for Pakistan for the resolution of its water disputes with India.”

Replying to a question concerning whether there would be a need for Indus Waters Treaty, had the international development paradigm been in favor of small rather than large dams, he replied in the negative. He explained that the need for such a treaty arose because large-scale dams could threaten Pakistan’s water security given its lower riparian position.