Home>Jangal Vich Mangal (Joy in the Wilderness): Millennial Irrigation and the Colonial Infrastructure as Gift

Jangal Vich Mangal (Joy in the Wilderness): Millennial Irrigation and the Colonial Infrastructure as Gift 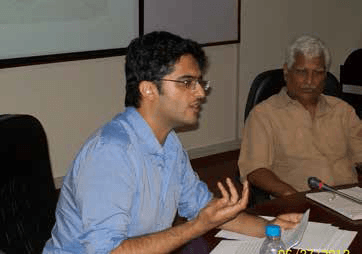 Mubbashir Rizvi, a doctoral candidate at the Department of Anthropology, University of Texas Austin was invited to deliver a talk on “Jangal Vich Mangal (Joy in the Wilderness): Millennial Irrigation and the Colonial Infrastructure as Gift“ on 27th of June 2012.

Rizvi opened his remarks by asserting that Central Punjab was admired for its dominant status in the national life of Pakistan: its intensive commercial agriculture was supported by a reliable supply of water, and a good road and rail network that connected most villages to market towns. But this image of Punjab as the center of the nation and its agrarian heartland was jolted in the year 2000. When the Anjuman Mazareen-e-Punjab (AMP) movement successfully challenged the military’s attempt to restructure vast agricultural estates by ending share cropping to institute private cash based contracts.

In his PhD thesis, Rizvi had used post-colonial theory and environmental anthropology to understand the vicissitudes of AMP, a peasant movement that was struggling to retain land rights over vast agricultural farms controlled by the Pakistan Army. In doing so, the movement had challenged the dominant narrative about Punjab while attempting to reconfigure the historical narratives about development. Furthermore, he drew attention to the presence of a large number of Christian tenants whose history had been glossed over in both Pakistani and Punjabi historiography.

Explaining the prehistory of the movement, he delved into the broader political and cultural significance of the network of roads, canals and trains between 1885-1947.

The British government had started an ambitious project of canal colonization during the above mentioned period due to which the irrigated area in Punjab increased from 3 million acres to over 14 million acres, while construction of modern villages and towns transformed the mobile and nomadic landscape. These projects of colonial modernity: canals, roads and trains were the artifacts of colonial power, and claimed to embody the redemptive aspects of colonial rule as the state narrative described deserts being transformed into gardens, while in reality many of these areas were already prosperous prior to the implementation of development projects. Further, he contended that these technologies had to be seen in the context of sociology, moral significance, and the symbolic economy and political debates that they came to embody. He referred to short stories on the history of canal colonies, in particular Ahmad Nadeem Qasmi’s “Thal”, which talked of the irrigation system and depicted how modern technologies were sometimes apprehended by the locals due to their negative impact on social, cultural life and value systems.

“Far from dissolving caste or pre-modern forms of association, the platform showed how colonial government relied on a paradoxical and productive relationship of change and preservation of these distinct identities.”

Although, the railway system, open irrigated fields and canal colonies anticipated a future in which caste hierarchies would be dissolved, and communal tribes reformed along with socioeconomic mobility for peasant laborers, still in reality these purposes were not achieved. At the railway platforms, the crowd ranged from peasants to Christian converts, and World War veterans. But, the railway platform came to mean very different thing to different people standing on that same platform. Far from dissolving caste or pre-modern forms of association, the platform showed how colonial government relied on a paradoxical and productive relationship of change and preservation of these distinct identities. The crowd’s caste, religious identity, class and military service determined the different governmental programs that applied to them. This politics of recognition also worked through exclusions, emphasizing the singularity of a given population from common law and therefore for protection. Thus, the regional, ethnic, tribal identity and caste differences persisted while the domain of citizenship remained extremely fragmented and constructed as the government dealt with different populations in uneven ways, even marking some communities as being un-fit for peasant cultivation.

“In the seemingly modern and democratic canal colonies that were seen as objects of modern agrarian life, intense religious violence was witnessed before partition.”

From the British perspective, road and canal projects were seen as a gift that would “transform Punjab”. Rizvi argued that it was instead an exchange rather than a gift, accompanied with the condition of modernity bound colonial subjection. It increased the intimacy between the colonial state and Punjab, such that the ruling central Punjab was still identified within the post-colonial context as the center. Modern infrastructure was used to guide the conduct of the state’s subjects: agricultural production was dependent on the location of the canal; commerce was generated where the road was built; so it increased the control and domination of the state.

In the eyes of the colonial state, sub-spatial groups had to be ruled according to their own customary laws that had to be discovered, documented and formalized. The colonial state worked in two different ways: incorporation though markets and laws, while at the same time isolating and protecting certain attributes that were not seen as compatible with market principles. This showed a contradictory path of promising radical change and preservation, inclusion and exclusion. Despite the utopian rhetoric of the state with its promises to deliver a modern and orderly agrarian society, the canal project re-signified traditional identities as the hierarchies and traditions of Punjab were legally entrenched.

In canal colonies, people from diverse caste and religious backgrounds were brought together (Jatt, Sikh, Arain) and these colonies were seen as more democratic than other parts of Punjab, which had a more feudal structure. It was assumed that the technological projects of development would dissolve caste differences, but in reality they intensified it. In the seemingly modern and democratic canal colonies that were seen as objects of modern agrarian life, intense religious violence was witnessed before partition. Rizvi thus concluded by saying that the perception of modern infrastructure and projects should be embedded in a cultural, historical and moral dimension.

In the second half of his presentation, Rizvi discussed the Okara movement and the archival analysis he had conducted for his research. He explored the history of the village Das (10) Chak. No road went to this village that made it seem remote and isolated. But this impression was deceptive as the village was connected to places as far as Belgium and London. It was also the first village in the history of Christian colonies that were set up in this area. More recently, Das Chak was the center of the first confrontation between tenant farmers and law enforcing authorities, and served as a catalyst for the movement.

Rizvi‘s research had revealed that many of the military farm villages were developed and constructed by the Christian missionaries. They had brought new converts into the wilderness before it had been irrigated. Many of these missionaries were Flemish and got funding from Belgium. But they were cut off from their Belgian support as war broke out in Europe. He then narrated the story of an indigenous inhabitant of the farms, Khushi Baba from the Das Chak village. Khushi Baba’s brothers and father had died in the process of settling the village because they had to fight off wild animals. They had been promised that land would be given to them six years after it was settled. But the promises were not kept and thus many tenant farmers felt a sense of betrayal from the Church.

“… dissimilar communities engaged modernity very differently based on the ways the colonial state recognized them.”

In conclusion, Rizvi argued that Khushi Baba’s narrative gave a sense of colonial modernity that was deeply compromising in terms of its promises of welfare and development, promises that came through colonial state and missionaries. Thus dissimilar communities engaged modernity very differently based on the ways the colonial state recognized them.

The talk was followed by a question-answer session. Explaining the significance of archival analysis in his research, Rizvi stated that the political analysis that focused on tracking governmental processes through textual archival analysis and place based histories, gave a view of contentious effects of power. Ethnographic archival fieldwork could aid in understanding the populations and their problems and in rethinking the way in which projects of development and technology were viewed.

A question was raised regarding the differing relationships between community and land, of the indigenous people versus those that came after 1947. Whether the post 1947 settlers looked at land differently and how it impacted the movement? Rizvi replied that different villages had different histories for instance Okara had a history of missionaries. There were other military farms that had different populations, demography and communities. However, the way they saw the movement didn’t vary that much. Many of the most prominent leaders of the movement were those that came after 1947. The history, background or size of land holding did not determine involvement in the movement.