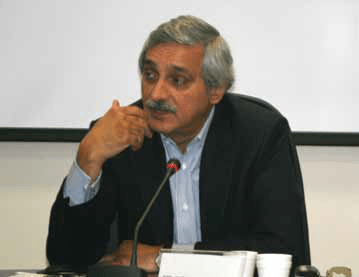 : Mr. Jahangir Tareen, a progressive corporate farmer, former Chairman Punjab Task Force on Agriculture, and former Minister of Industries, Production and Special Initiatives was invited by the CPPG to deliver a talk on “Managing Successful Farming in Pakistan: Experimentation and Innovation” on November 23, 2010.

Jahangir Tareen began his talk by providing a background and overview of his businesses. His father had been a farmer in Southern Punjab from whom he inherited some 430 acres. Following his educational training in Business Administration from the US, he started working in a bank. However in 1979, he decided to venture into farming while applying the management techniques he had learnt as part of his education and profession. He was now managing 3,000 acres of mango and cotton farms in Lodhran, 30,000 acres of sugarcane, 700 acres of hay and a 1,000 acre dairy farm. His company employed a total of 72 agriculture graduates and many diploma holders. This journey had been hard and it began with the challenging task of applying the Management Information Systems (MIS) technique to the farm.

Describing the essentials of his business strategy for envisioning, creating and managing a successful business which had generated remarkable results for his farming business, he listed three major tools. First, efficient supervision and exercise of control; Second, creating a competitive edge by exploring the unexplored and the third most pivotal concept, interaction and communication with supervisors. For the first two, MIS was instrumental and he considered it necessary for the success of any commercial enterprise. He used MIS to understand the farm and to make it more efficient by plotting and numbering the land, by exercising control over where and how the inputs were being used and by systemizing the farming process. He started a Master Khaata (Master Register) recording activities of every plot ranging from irrigation of land, to use of inputs and supervision, which helped in comparing the inputs used against crop yield. He was emphatic in pointing out that direct interaction with the managers supervising farms at the grassroots level has proven to be a very fruitful tool for farm management.

“…foreign consultancy services helped to completely revamp and revitalize farms as many common Pakistani agricultural practices were done away with including over fertilization and over irrigation.”

Tareen then delved into the details of his enterprise building process. He suggested that although his farms had a high cotton yield and he had come to be known as a progressive farmer early on, he still had many unanswered questions about crops and farming but felt hampered by the agriculture establishment of Pakistan. He was not successful in obtaining the required information from local research institutes and was dissatisfied by the agricultural knowledge of local experts and universities. Convinced of the dearth of local agricultural knowledge, and lagging research institutions an obstacle in business expansion, he decided to get international help. He hired an Australian agronomist and partnered with an international pesticide control company for a three year Rs. 5 million agronomy project. He specifically chose Australia because her farming was competitive, profitable and did not rely on government subsidies. The foreign consultancy services helped to completely revamp and revitalize farms as many common Pakistani agricultural practices were done away with including over fertilization and over irrigation. Continued assistance immensely improved farm productivity while applying the concept of sustainable farming. He stated that the main breakthrough was to fill the 20 year research gap between Pakistan and the rest of the world by hiring expertise from abroad.

Following this initial success, he expanded into sugarcane farming and set up his first sugarcane mill in Rahim Yar Khan. But sugarcane farming was more challenging than both cotton and mango as it was more water and labor intensive and thus he found it difficult to expand from the initial farm size of 1,000 acres. But given that constant growth and upgrading was imperative for an enterprise and he wanted to expand his sugarcane business, he decided to develop a ten year vision with the target of 10,000 acres, which was then considered an unachievable task. His first step was to hire a software company to develop special software to manage his farms. It involved a two year process of putting all of Master Khaata information into the computer and became operational in 2004 making it possible to control and manage a large piece of land. The cost and yield of every plot of land in 30,000 acres was meticulously recorded and cross checked. Additionally, capable and well-trained farm supervisors and managers were pivotal in the success of the enterprise. A total of seven divisional managers managed 5,000 acres while each supervisor was responsible for managing 150- 200 acres. The human resource was primarily Pakistani apart from a few consultants and an effort was made to continuously upgrade the management ability of the leaders through international trainings.

Lastly, discussing his largest operation of 30,000 acre sugarcane farm, Tareen articulated the innovative and progressive agricultural practices his enterprise followed. The farms used 30% less water than average while sugarcane was planted at a 6 feet distance to allow mechanical operations. Plans for further improvements included: one, to improve water efficiency in all farms; two, reduce diesel costs by 30% in the coming 2-3 years as it was the single largest cost item and three, develop a plant breeding centre as it was the most essential and pressing need for business sustainability. The sugarcane in his farms was of one variety resulting in an extremely narrow genetic base and thus had a high risk exposure to disease. He had thus made a large investment to set up a $3 million state of the art breeding center which would produce the first result in 10-12 years. He suggested that though it was a long-term investment, the results were guaranteed and would be immensely beneficial not only for his enterprise but for the entire sugarcane business as new varieties would be available to Pakistani farmers.

“…used MIS to understand the farm and to make it more efficient by plotting and numbering the land, by exercising control over where and how the inputs were being used and by systemizing the farming process.”

The talk was followed by a question and answer session. When asked if he used powered irrigation and what steps he had planned to reduce diesel costs by 30% in the next 3 years, he suggested that there are numerous agronomic techniques to save water and improve efficiency. Diesel was mainly used in pumping water for irrigation and tractors. Thus reduction in water usage also reduced diesel consumption making water-use efficiency doubly important while his company had conducted a study on ways to reduce the cost of pumping. Regard efficiency of tractors, minimum cultivation and import of larger, more fuel efficient tractors was a viable option.

Responding to a question about human resources, the general perception that foreign consultants were insensitive to local breeds and that there existed a knowledge gap in terms of their understanding of local agriculture, he explained that foreign consultants brought with them a basic knowledge of agriculture and crops but needed to be assisted in developing an understanding of local agriculture. Thus it was important to create an efficient receiving vehicle for adapting foreign technology to Pakistani conditions through well trained and educated Pakistani individuals who interacted with the consultants to evolve suitable solutions over time, which was not possible through the traditional munshi system. Further elaborating on the importance of human resources, he suggested that its selection at the inception of an enterprise was m ost challenging. Though he was lucky to get a core team of productive and efficient people, still, to harness their potential, more than financial rewards it was important to support them and to keep them mentally motivated and involved. 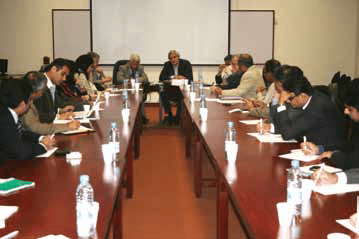 Answering a question regarding the sugar crises, food price hike and the responsibility of the elite, Tareen attributed the sugar crisis to unwise government policy and involvement of mafias in hoarding and speculation while clarifying that his company sold sugar evenly throughout the year and did not indulge in speculation. He put the blame of unnatural rise in food prices on the increase in wheat support price from Rs. 625 to Rs. 950 arguing that research showed that price of wheat signaled the price of other food commodities. However, he accepted that although it was in the self interest of the elite to improve governance, instead the Pakistani elite had a myopic outlook and were more interested in short-term rather than long-term gains, which also translated into politics. He gave an example of how a good cotton breeding institution would have evolved varieties suitable for the country and solved most cotton related issues. But public research centres were not up to the mark and the textile industry was not willing to invest in setting up a cotton research centre.

In response to related questions if he considered agriculture a cultural exercise in Pakistan, how he viewed the displacement of tenants as an outcome of his farming business and if corporate agriculture could be scaled and implemented throughout the country, he stated that agriculture was part of the culture all over the world but it could no longer be practiced at subsistence levels. As part of the industrialization process, agriculture had eventually come to be treated like an enterprise producing surplus value and Pakistan’s agriculture policy should facilitate its progress from subsistence to corporate farming. Regarding displacements, he said that most of the land acquired by his company did not have tenants but farmers as direct operators. However, some farms in Sindh did displace tenants, which was a cost. However, this cost was more than compensated by a number of positive externalities including on time payment, payment of minimum wage and the generation of economic activity for the overall benefit of the area. He further suggested that popularizing and implementing corporate farming among the majority subsistence farms entailed provision of three basic facilities: knowledge, capital and marketing. For a subsistence farmer, traditional knowledge needed to be tempered by research, marketing skills needed to be developed and capital needed to be provided. In conclusion, he emphasized the importance of adopting technologies that reduced costs and increased productivity, suggesting that ultimately the solution lay in increasing productivity.