Home>Marginality and the State: A Case Study of Jharkhand, India

Marginality and the State: A Case Study of Jharkhand, India 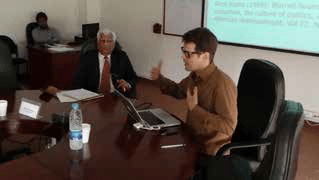 Dr. Roger Begrich, a legal, political and medical anthropologist, and post doctoral fellow at the Institute for European Global Studies, University of Basel, Switzerland, was invited to deliver a talk on Marginality and the State: A Case Study of Jharkhand, India at the CPPG on March 19, 2014.

Dr. Begrich began his talk by stating that he had employed an anthropological approach to study the state, its interaction with citizens and used qualitative and ethnographic methods of research. Elaborating, he presented the anthropologist’s conceptualization of state. According to him, Radcliffe Brown defined the state as an entity over and above human individuals making up society, with the attributes of sovereignty and will embodied by state law. Philip Abrams viewed the state primarily as an instrument of legitimate disinterested domination. Gupta had argued that the state legitimized itself to the populous through development projects like health care and employment schemes. In his view, state was not a coherent entity but rather discrete and fragmented, while the boundary between state and civil society was fuzzy and constantly shifting. Premised on the afore-mentioned conceptualizations, Begrich proceeded to discuss how the indigenous peoples associated and interacted with the state. In that context, he presented a case study of the marginal aboriginal population of the Indian State of Jharkand.

Jharkand, India was a southern part of former Bihar, an area that had been traditionally dominated by Adivasi– the indigenous tribal people. But by the 1990s, the tribal population had been reduced to one third of the original population. According to the most recent census of 2011, indigenous population was approximately 100 million or 8.6% of the total population of India. Jharkhand became a state only in November 2000, prior to which there were various movements demanding statehood. However, the government’s eventual concession to confer statehood was a decision based on political expediency rather than the demands of tribal leaders.

He had studied the Adivasi population residing both in rural as well as urban environment and observed that tribal aspirations were geared increasingly towards a life in an urban setting rather than as cultivators. Though the main focus of his talk was the perceived and projected distinction of being a tribal. The notion of tribal status was contested in international law as well as in India. During the mid nineteenth century, the distinction between caste and tribe was solidified and tribes all over India were established as different from mainstream Hindu populations. This distinction was categorized as two different races. Further, the practice of alcohol use became a significant marker of difference between tribal and non-tribal populations, and continued to be in contemporary India. Tribal population’s drinking practices were considered completely different from the rest, as primitive, dangerous, and thus Adivasi were looked at as drunkards. Since the British era, the drinking practices of Adivasi carried a social stigma that had been internalized by the population.

Begrich drew attention to the liquor laws, the identification of intoxicating substances for licensing and taxation, and how differences between indigenous and non-indigenous populations were manifested in these laws. Customary forms of alcohol used by Adivasi could not be licensed, however were easily available for purchase. Many families had no other means of livelihood other than preparing and selling alcohol. This issue was particularly pertinent in areas in which people had been displaced due to industrial development and construction, thus losing their land and livelihood. Further, the private sector jobs were stratified according to caste and religion, making it a rarity that an Adivasi would find a job in the private sector, for instance as a shopkeeper.

Alcohol played a pivotal role in how the Adivasi experienced their relationship with the state and the mainstream population. The Adivasi continued to depend on the sale of alcohol even though it was illegal. The police had an intermittent and observatory presence through occasional visits. Police did not make any effort to eliminate the sale of alcohol nor did it completely tolerate, thus causing a considerable degree of anxiety among families, which depended on the sale of alcohol. This trend illustrated the way in which the Adivasi had been subjected to the arbitrariness of state representatives, the police and excise officers.

“It was ironic that Adivasi had subjected themselves to the criteria, stigmatization and expectation of the mainstream society as well as the state, …”

Apart from alcohol consumption, another aspect that differentiated tribal populations from the mainstream was the practice of religion. The question of whether the Adivasi were Hindus or not had been studied for decades. Colonial administration and ethnographers had identified the tribal religions in Jharkand as animism, a category that was present in the census at that time. But the post-colonial India census left only two options, Hindu or Christian, while no Adivasi religion existed as an identifier.

In recent years, a movement had been launched to formalize the traditional Adivasi religion, most commonly referred to as Sarna and be recognized as a distinct religious community in the census. It was now being stated that alcohol was not part of tribal religion, when it could easily be observed that alcohol was an integral part of religious ceremonies, in social interactions as well as in interactions with ancestors and spirits. Begrich argued that this reformist position against alcohol, to try to eliminate it from religious practices, was primarily an outcome of severe stigmatization that these communities had experienced due to their use of alcohol. It was ironic that Adivasi had subjected themselves to the criteria, stigmatization and expectation of the mainstream society as well as the state, by denying the importance of alcohol in the religious life of their community.

Lastly, discussing the Maoist movement, which was considered the biggest threat by the Indian government, he explained that the insurgents were vehemently opposed to rampant alcohol use. The Maoists were active in Jharkand, enjoyed popular support due to their anti-alcohol position and attempted to prohibit sale of alcohol in Jharkand. Similarly, the Adivasi communities were also cognizant of the perils of uncontrolled and widespread use of alcohol as alcohol abuse; wastage of money, domestic violence and neglect of children etc. had damaged the fabric of society and impoverished it. Ironically, while the state had been unable to implement alcohol prohibition, the anti state Maoists were taking practical measures to implement the state law of alcohol prohibition.

The talk was followed by a lively question and answer session. Responding to a question about the fluid distinction between state and Adivasi, he explained that it was difficult to uphold a strict boundary between society and state because Adivasi were also part of the state. There were various forms of constitutional reservations through which Adivasi could enter careers in the civil administration, bureaucratic positions, police force, and army. Thus the state was not separate from Adivasi at an individual level. But a contradiction existed as the police was understood to be a violent enemy while at the same time, a vast majority of young men wanted to enter the police force because it was one of the few opportunities for a secure job in terms of income, status and respect.

Responding to a question on differences between the rural and urban populations, he articulated that in the rural areas, he had interacted with rice cultivators who also collected forest produce. Subsistence was guaranteed by cultivation. Thus people did not depend on alcohol as a means of livelihood and sold it only occasionally. Alcohol was not the basis of a regular income, and was sold in a weekly market or whenever an urgent need for cash arose, for instance for buying fertilizer or other farming products. The trend was however markedly different in the cities. In urban areas, alcohol was consumed on a daily basis and in many areas over 50% of the families depended on the sale of alcohol. Societal problems were more prominent in the city, which was partly attributable to high unemployment. Even educated and elite Adivasi were often unable to find jobs, especially if they aspired to work in the bureaucracy. Thus alcohol consumption, sale and purchase were an integral part of the culture and economy of urban Adivasi communities.

“Alcohol played a pivotal role in how the Adivasi experienced their relationship with the state and the mainstream population.”