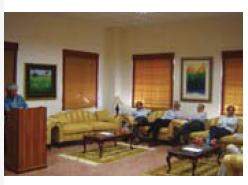 David Barsamian, an American radio journalist known for his collaborative writings with foremost intellectuals including Eqbal Ahmad was invited as a Distinguished Guest Speaker on April 3, 2008 to deliver a talk on Media and Propaganda: Manufacturing Consent at the Center for Public Policy and Governance (CPPG).

David started his talk with a quote from Voltaire: ‘Those who can make you believe absurdities can make you commit atrocities’. He highlighted one such absurdity of the current corporate media in the West to present Muslims as a monolithic block thus ignoring the vast diversity of opinion in Muslim communities. Not just absurdities but the power to highlight or undermine certain discourses greatly influences mainstream thought. He gave the example of Martin Luther King who in the last five years of his life had moved beyond race based analysis to articulate linkages between racism, militarism and capitalism. But the King who broke the silence on Vietnam War and criticized his own state for purveying violence is not the man who is commemorated every year through a state holiday and associated programs. David specifically differentiated between tactical and strategic analysis in the media. He argued that although media critiqued the tactics of American involvement in Iraq such as mismanagement and the lack of ground forces to keep peace after the fall of Baghdad, still it did not raise strategic issues such as the control of oil resources and international dominance. He described these as ‘the principles of pre-suppositions of the doctrinal system which are removed from scrutiny and which become the framework for thinkable thought but not objects for rational consideration’.

By elaborating above examples, David made a case for alternative media which concentrates on facts and news either omitted or partially included in the mainstream press. A media that presents a people’s perspective rather than of the elite that controls mainstream media outlets, a media that serves as a vehicle for taking the voice of community oriented groups including environmental, human rights and others to the wider public. He differentiated alternative media by simply stating that one has to keep a distance from power to be able to speak truth to power. Thus a journalist who plays tennis and have dinners with ministers simply can not do critical journalism. More importantly he argued that to counter the framework of official thinking, a simple contradiction is not enough as the message needs to be repeated to reach critical mass and inject alternative thinking in the mainstream. The alternative also needs to include solutions to empower the listener to participate in something positive.

Talking about community radio and community access television in the US, he stated that they are owned and run by the community through a voluntary membership fee and citizen donations.

David’s talk led to a stimulating question answer session; an issue of the viability of community media (radio & television) was raised. Members of the audience argued that Pakistani State had only allowed radio & television licenses for commercial purposes rather than for citizen empowerment and the only examples of community radio were the illegal radio channels used by militant elements in Swat & FATA. Interestingly, although the government had clamped down on mainstream media, these illegal stations were allowed to run for a number of years.

On the question of quality of media in India & Pakistan, David mentioned that most electronic media outlets in India were of an ‘escapist entertainment’ nature. Though there was concentration on news in Pakistan, the complete lack of investigative journalism in news programs was driven by monetary aspects as an investigation took a lot of time and resources while opinion oriented news programming involved little preparation.

In response to a question on the affects of community media on public policy, David mentioned that it had helped raise consciousness among the people to think critically. It was alternative media which had educated the American population on the affects of the Iraq war. Additionally community radio had helped raise local environmental concerns among communities. David suggested that community radio was a cost effective way to raise awareness among the rural communities of Pakistan.