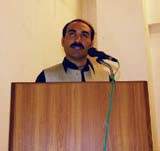 The session was chaired by Mr. Hasan Mustafa Regional Director, International Organization for Migration Islamabad while Mr. S. M. Khalid Senior Executive Director Planning and Research ADBP acted as the discussant. Dr. Sabiha H.Syed Director Migration Research Center both moderated as well as provided an overview of the topic at hand. Additionally papers were presented by Dr. Mussarat Jabeen on Managing Migration trends in Balochistan and Mr. Humayun Khan on Forced Migration and its Impact on the Mehsud Tribes.

Syed provided an overview of migration dividing it into Internal and International based on the current nation state system. According to her, though ‘Rural To Urban’ migration was the predominant and most discussed Internal Migration, it also included ‘Urban to Urban’ – people moving from smaller cities to a larger ones or vice versa and ‘Urban to Rural’ & ‘Rural to Rural’ which were limited in Pakistan. She went on to categorize International migration between Regular and Irregular. Regular migrants had proper documentation. They either became Resident migrants of the new country or conducted Seasonal migration, spending only part of the year working there. Irregular migration included Smuggled Persons who invariably gave all their life savings to be smuggled to their destination or Trafficked Persons who were trapped or forced to migrate because of an existing demand at the destination, an example being the camel jockeys sent to the Middle East. Exposing yet another facet of migration, she mentioned individuals or groups that have been forced to flee their homes to escape armed conflict, generalized violence, human rights abuses or natural or man-made disasters. In case of Internal Migration, this is termed ‘Internally Displaced Persons (IDPs)’ while for International Migration they are called ‘Asylum Seekers’ and ‘Refugees’. She observed that Internal and International Migration have both positive and negative implications. Citing the example of Pakistan, she pointed out that the country has received remittances to the tune of $ 6 billion a year, but also suffered from ‘brain drain’ and witnessed social turbulence in regions that were affected by migration. Given this evidence, she pleaded that migration issues need better attention from demographers and policy makers for improving citizen and state security in the developing states.

Analyzing the impact of Forced Migration on the Mehsud Tribe, Humayun Khan stated that 2.5 – 3 million people have been displaced as the result of military operation in South Waziristan affecting both North Waziristan as well as settled districts such as Tank and Bannu. The study collected data from 100 households (886 members) of Mehsud tribe of South Waziristan displaced to Sarangzona village near Gomal River in the vicinity of Tank. The IDPs had left their homes, closed their shops, selling their livestock while they made their way on foot through tedious mountain routes as regular routes were closed taking 2-3 days in the bitter cold of January.

Economic consequences of military operations were devastating for the Households under study. Out of the 886 members, 245 earned their living through occupational jobs and 51 out of the 60 interviewed had lost their jobs. Livestock was killed during military operation due to shelling or disease while most had left their livestock in the region or sold it at very low prices because of the unstable economic condition and non-availability of shelter and fodder in recipient area. 215 livestock had died among the 100 households interviewed. The property losses were heavy, 26 households had their moveable property completely destroyed, 15 had stuff stolen while 5 had partial destruction. The study estimated that about 400 houses were demolished during the military operation in the Sinkarzai bazaar of South Waziristan alone.

Discussing effects on other aspects of life, Khan stated that although existing educational facilities were bad in Waziristan, the military operation led to the closing of almost all educational institutions. The schools did not have the capacity to accommodate the children of migrant families. While the migrants in alien environment suffering from economic and psychological distresses were not ready to send their children to school. In total 58 students were affected but given the low literacy rate, the impact was enormous as only 133 out of the 886 migrants were literate.

The property losses were heavy, 26 households had their moveable
property completely destroyed, 15 had stuff stolen while 5 had
partial destruction”

The trauma of displacement and insecurity had severely affected the health of the community and also created social adjustment problems. The migrants lived a precarious life as 95% of them faced difficulty adjusting to the new culture of the recipient area, while hostile environmental conditions made life equally miserable. Migration which started in the extremely cold weather of January was hard especially on pregnant women, children and the elderly causing deaths. In total 7 deaths occurred during migration while 8 members of the 60 households interviewed suffered injuries. The government had failed to provide free medical camps or health services. A private medical service provider was treating 6-7 migrants’ patients daily. 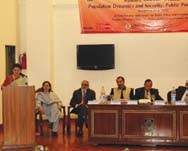 In her presentation on Managing Migration Trends in Balochistan, Dr. Mussarrat Jabeen took a different take and argued that migration patterns are influenced by the nation state systems based on regional relationships and the status of a state in this system. International interests either worked with national power structures or local politicians. She observed that Baluchistan was of vital significance in the regional-international vision of great powers and that the centre-province disharmony made it vulnerable to outside influence.

Jabeen argued that Balochistan’s ancient history showed contacts with Egyptian civilization and with Central Asia but the topography and weather of Balochistan kept it as a seasonal migratory destination. It had usually been used as a passage or marginalized land for migrants from neighboring empires because of limited agricultural and food resources. Until recently, the nomad communities moved to and fro across state borders but because of the conflict in Afghanistan and associated state policies, this population has become confined to Balochistan leading to a change in their livelihoods as well as a greater stress on resources.

Jabeen considered geo-strategic valuation of Balochistan because of its confluence of South Asia, Central Asia and Middle East especially the Gulf as its strength. She considered the economic development of Balochistan as a key to progress for South Asia because of it’s untapped natural resources and as a bridge for energy development of the region. The weakness lay in the brain drain, lack of local human resources and thus a dependency on outsiders for development, while the disintegration of USSR leading to economic independence of Central Asian States had created a huge economic opportunity for Balochistan as a gateway to Central Asia. Discussing threats, Jabeen stated the recurrent conflict in Afghanistan, center province disharmony, law and order situation, regional policies of the nation state system and passive globalization. In her view, the contemporary politics of Balochistan was defined by the fight for Baluch identity and a struggle for appropriate and just allocation of resources between federation and the province; the critical question being who should get what and how from the resource rich province?

The discussion that followed raised the issue that Western analysts look at in-migration as a security threat, not giving adequate attention to the positive aspects of in-migration. Participants observed that Pakistan should develop a comprehensive migration policy encompassing both Internal and International Migration. Pakistan had 2 million migrants in the Gulf while 33% remittances came from the US. In addition to Iranian and Nepali refugees, it was host to 3 million Afghans and 1 million Bangladeshis, out of which 2 million resided in Karachi.

Weakness lay in the brain drain, lack of local human resources and
… a dependency on outsiders for development.”