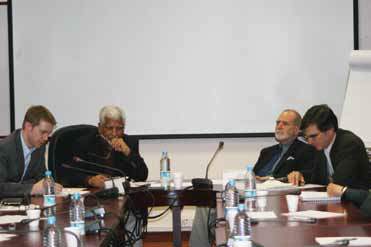 Michael Krepon, President Emeritus of the Henry L. Stimson Center, Toby Dalton, and George Perkovich were invited to a roundtable discussion on “Pakistan India & US Relations: Future Directions” on 5th of February, 2011.

Michael Krepon opened his remarks by identifying the consequences and repercussions of possessing nuclear arms. The advantage of having a nuclear bomb was deterrence, he said. However, it encouraged proxy wars by preventing direct exchange among countries possessing an atomic bomb. The US and the Soviet Union had been involved in proxy wars in Vietnam and Afghanistan. Similarly, with the acquisition of nuclear weapons Pakistan had also opted to pursue proxy wars more deftly.

Elaborating his argument, he went on to say that when two countries had the bomb, they sometimes used it as an insurance policy against escalation across the nuclear threshold, thus possession of nuclear bomb could encourage engagement in conflict below the nuclear threshold. More importantly, the bomb did not prevent limited conventional wars as could be judged from the Soviet Union – China, and the India – Pakistan wars. Explaining the repercussions of nuclearization, he asserted that if a country increased its stockpile of nuclear weapons, it does not diminish its insecurity as the rival power also attempts to increase its stock piles, thus the nuclear race ensues.

Talking specifically about Pakistan he suggested that as the country’s nuclear stockpiles had increased so had its security concerns; as the message that came through from talks with the Pakistan government, the military and civil society was that of wounded vulnerability. Referring to the attack on Pakistan Army Headquarters in 2009 and the fact that attackers had inside information, he asserted that Pakistan was facing a “design basis threat” to its nuclear assets and thus needed to design an effective defence mechanism to protect its sensitive sites holding fission material and nuclear weapons from internal security threats. Although the guardians of Pakistan’s nuclear deterrent had said that there were 10,000 guards and other undercover officers protecting it, one needed to keep track of how reliable these guards were in the face of insider threats. The underlying question for Pakistan was how far its current defence strategies were successful in making Pakistan feel secure domestically as well as internationally because if these were resulting in an increase in security threats, then other strategies needed to be considered.

Toby Dalton picked up from here stating that Pakistan’s efforts to improve the security of its entire range of nuclear assets was commendable; however the main problem was their co-location as terrorist groups had expressed an interest in acquiring and using nuclear weapons. Further, the hyperbole in Pakistani media about the US wanting to take Pakistan’s nuclear weapons was misguided as the United States had its own 30,000 nuclear weapons and was not interested in more.

Discussing India-Pakistan relations in the context of nuclear weapons, he stated that although only a few of the confidence building measures between the two countries had lasted, still these measures were important symbolically in trying to normalize and stabilize relations between the two nuclear powers. He termed the signing of Lahore memorandum in 1999 as one of the most successful confidence building steps because it had been taken independently by both governments, in the absence of any foreign pressure or interference. He stated that Pakistan and India were now on very different trajectories as India’s economy was growing rapidly and so was its nuclear investment leading to growing nuclear asymmetries between the two countries. In these circumstances, it was increasingly important to build incentives to improve relations such as increased trade and an impetus for development. The main challenge was to bridge the gap between India’s interest in discussing the issue of terrorism and Pakistan’s interest in strategic dialogue including Kashmir.in strategic dialogue including Kashmir.

Focusing on the dynamics of Pakistan-India relationship, George Perkovich, (who has done extensive work on nuclear programs of India and Pakistan), stated that the terms of engagement insisted upon by India was action on counter terrorism. Although, most of the international community including India understood that it was not possible for Pakistan to provide a guarantee against future terrorist attacks, still the expectation was a dedicated effort by the Pakistani state to curtail such activities. The fundamental issue was that compared to Pakistan, India was a much larger country with a high GDP growth rate and a rising military budget, while tax evasion was rampant in Pakistan and tax to GDP ratio was low. This implied that the Pakistani government would have less revenue to invest in security and defence, dwindling any chance of matching India’s defence budget. Given that India was also emerging as a regional and global power, Pakistan needed to explore the best strategy for a smaller state to engage with a larger state given the inequality of the two in economic and political power.

The roundtable discussion evoked a number of questions among the participants. Replying to question regarding the US interest in Pakistan and whether US focus on Pakistan was temporary or would deepen, the panel responded that Pakistan was of strategic interest to the US. There was recognition of its size and location, and the US was interested in combating and eliminating terrorism, security of nuclear weapons, regional peace and stability and growth of democracy and civil society. This interest was reflected in the Kerry-Lugar bill. However, it was easier to maintain an ongoing relationship if the partner country receiving aid showed positive and upward trends, while a worsening situation would increase challenges to sustain political support for assistance. Thus US help to Pakistan was contingent upon various socio-economic and political indicators. The current powerful US Secretary of State was extremely committed to Pakistan, so there was a strong possibility of building momentum for support of Pakistan, but the nature and duration of support and engagement depended upon Pakistan itself. The relationship had survived through various ups and downs in the past and should endure mainly because both countries had pivotal interests at stake, while common interests, tradeoffs and disagreements were all part of the same parcel.

Responding to a question about why US had not actively engaged in resolving the Kashmir issue, the panel asserted that contrary to popular belief, the US did not have enough clout to solve the Kashmir issue. The US could not force a diplomatic resolution of Kashmir or any other problem. Instead, a regional development authority that dealt with trade, water and infrastructure, power generation and the like was suggested to concentrate on raising living standards and bring about sustainable development in Kashmir. The panel argued for trade liberalization and an entrepreneurial bi-national commission of India and Pakistan to concentrate on improving the quality of life in Kashmir. Further, Pakistan should contemplate and figure out the most effective strategy to engage with India by learning from the examples of US-Mexico and France- Belgium relations. Power differential between India and Pakistan was expected to grow in the coming years. So would Pakistan’s trust deficit with US and its perspective that US was unnecessarily favouring India because US would be engaging with India economically and militarily due to its emergence as a global economic and political power. Thus Pakistan should recognize and adjust to this change and develop an engagement strategy that would be beneficial and productive.

“Though other countries had contributed to Pakistan’s difficulties, still most of Pakistan’s issues were home-grown.”

Answering a question regarding what Pakistan could do given its grave and growing domestic difficulties, Krepon argued that Pakistan needed to stop blaming others for the ills of Pakistan. Though other countries had contributed to Pakistan’s difficulties, still most of Pakistan’s issues were home-grown and a consequence of poor decision making by its leadership. The fundamental issues for Pakistan were Pakistan Army’s strategic culture, growing political disorder and schisms in civil-military relations. Once Pakistan recognized and took ownership of its problems, it would be in a better position to solve and address them.