Home>Pakistan: Signposts of a Garrison State

Pakistan: Signposts of a Garrison State 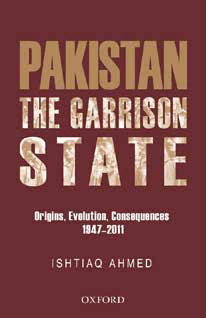 Dr. Ishtiaq Ahmed, former Professor at the Department of Political Science, Stockholm University (1987-2007), currently Visiting Professor at the Lahore University of Management Sciences (LUMS) and author of the book Pakistan: The Garrison State, Origins, Evolution, Consequences (1947-2011), was invited to deliver a talk on Pakistan: Signposts of a Garrison State at the Centre for Public Policy & Governance on November 2

Dr. Ahmed began his talk by stating that the modernist Muslims led the movement for Pakistan, however, immediately after its inception it acquired the overtones of an ideological Islamic State. Reconciling the Muslim nationalist identity with the Islamic identity became a challenge and continues to be debated. With the onslaught of 9/11 and what followed, Pakistan acquired the unenviable reputation of the ‘epicenter of international terrorism’. Furthermore, military’s deepening involvement in the internal and external affairs of the country led some analysts to label it as the ‘Deep State’.

Tracing the origins of militancy, donor-dependency and evolving civil-military relations, Ahmed gave a historical overview of Pakistani politics. He argued that American involvement in South Asian politics was via China where they were supporting the Kuomintang against the winning communists. Thus, America desired a strong united India against the threat of communist China, and was opposed to the idea of Pakistan. He made an interesting observation by claiming that the US President, Roosevelt was a committed liberal who was against creating a state in the name of religion. While, the Soviet Union saw Mahatma Gandhi’s non-violent position as counter revolutionary, and thus supported Pakistan with its emphasis on Islamic socialism and justice.

Ahmed then went on to elaborate on his theoretical framework of ‘Post-colonial Garrison State’ and how it applied to Pakistan both historically and contemporaneously. Referring to Harold Lasswell, he stated that ‘Garrison State’ was a multifaceted concept characterized by the military dominating the state in all sectors of life. He traced the origins of Garrison State in real or imaginary foreign threat, and thus perpetual insecurity that encouraged military dominance. He then invoked Hamza Alvi’s concept of ‘Post-colonial State’ which contended that an overdeveloped state dominated an underdeveloped society. He argued that it bore similarity to a neo-Marxist standpoint derived from classic Marxist theory of state which considered state merely as an instrument of the ruling class. Pakistan had a bureaucratic military oligarchy that represented institutions of a national character. Civil bureaucracy and the military constituted an oligarchy in which the military increasingly was to be the senior partner. The Post-colonial Garrison State was a synthesis of these two concepts in which a military came to dominate the state by emphasizing the fear of foreign aggression while successfully finding donors willing to train and arm it.

“… exorbitant defense expenditure had depleted the resources that could have been dedicated to a human development agenda,…”

Discussing Pakistan’s donor dependency, he stated that in the 1950’s when Nehru said that he would pursue non-alignment– not ally with the US or Soviet Union, the US turned to Pakistan. The first consignment of arms and aid arrived in 1951, which was a mere $10 million while Pakistan had asked for $2 billion, he claimed. Over time, as Cold War intensified, Pakistan became more important and worthy for the US. In 1954, the first formal military agreement between US-Pakistan was made followed by another agreement in 1959. Though there was no mention of India in the main agreement, supplementary documents from the US State Department stated that under no circumstance should arms be used in a war with India. This became clear when Pakistan and India went to war in 1965. US imposed an arms embargo on Pakistan, as the US wanted Pakistan as an ally but not at the cost of its friendship with India. This prompted Pakistan to deepen friendly relations with China, which had an adversarial relationship towards India. The third country that Pakistan was heavily reliant on was Saudi Arabia. With Khomeini’s accession to power, the contest to lead the Muslim world began between Saudi Arabia and Iran. Due to majority Sunni population, Pakistan had leaned towards Saudi Arabia. In conclusion, such relationships not only created political and economic dependency but also brought along cultural and ideological dependency resulting in the rise of sectarianism and militancy.

“military came to dominate the state by emphasizing the fear of foreign aggression while successfully finding donors willing to train and arm it.”

Dr. Ahmed then narrated major historical events to trace the origins of the Garrison State. The serious leadership crises post Jinnah and Liaquat led the civil services to dominate from 1951-58. General Ayub’s 1958 military coup achieved considerable economic growth but East Pakistan developed grievances about its share. The 1965 war with India redefined patriotism while the secession of East Pakistan was wholly blamed on Indian intervention rather than a measured and balanced assessment of where Pakistan went wrong. Under Prime Minister Z.A. Bhutto, a consensus constitution was formulated which had more Islamic clauses than any earlier constitution of Pakistan. Zia shepherded Islamization and implementation of blasphemy and Hudood laws; the Iranian revolution ushered in Islamic fundamentalism, and lastly, the Afghan Jihad radicalized the whole region giving birth to many Kashmir, Afghan & Al-Qaeda militant groups. According to him, the 1988 elections did restore democracy, however, he described the era of 1988-2008 as that of the ‘Deep State’.

In conclusion, he stated that Pakistan had followed the trajectory of an overdeveloped and overspending state, which facilitated the ascent of military. The exorbitant defense expenditure had depleted the resources that could have been dedicated to a human development agenda, and this primacy of security over education has been very costly. He underscored the primacy of economics over ideology and called for abandoning patronage of the Taliban.

Suggesting a way forward, he argued that Pakistan needed to radically revise its priorities; it should seek peace through normalization of relations with India and Afghanistan; through SAARC– trade, tourism, and creation of a conducive climate for domestic investment. Focus on humanitarian issues of floods, water scarcity, climate change and population growth.

During the question answer session, asked if the concept of Garrison State included an element of ideology? He responded that Ideology was part of the Garrison State as it celebrated military might and power. He hastened to add that the ideological dimension dominated the most in Pakistan, and was essential to the survival of its Garrison State nature.

Answering a question, whether Pakistan could survive purely through internal rent seeking, he responded that Pakistan was still largely dependent on remittances and foreign lending. It was dependent on the US, China and Saudi Arabia for economic assistance and would likely to remain so unless we produced an internal economic base for the Garrison State.

“…ideological dimension dominated the most in Pakistan, and was essential to the survival of its Garrison State nature.”