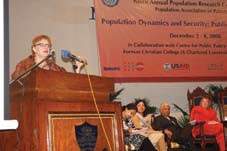 Though population growth by itself is a cause of alarm, she pointed out that it is important to explore potential connections between demographic trends, development, governance and security to substantiate claims towards building a political will to counter both population growth and its implications. To reinforce her point Coen drew the attention of the participants to The Demographic Security research study, which explored potential connections between demographic trends and conflict from 1970-1999 specifically exploring the association of high proportions of young adults (“youth bulge”), rapid urban population growth, diminishing supplies of cropland & fresh water and HIV/AIDS-related demographic changes with conflict. Thus, suggesting that very youthful populations are highly vulnerable to civil conflict. The study noted that countries with high percentage of children and youth were 2½ times as likely to experience conflict during the 1990s.

To elaborate her argument Coen cited another research study The Shape of Things to Come, which explores age structures’ relation to civil conflicts, economic development and governance. It takes into account all new civil conflicts with state as a party between 1970 and 2000 with a casualty figure of 25. The research categorized countries according to their corresponding age structure as Very Young, Youthful, Transitional and Mature and found that population age structure is a key link between states that are “healthy”, in the sense of being more peaceful, democratic, and better able to provide for the needs of their citizens. Age structure also provides insights into the current and future political, economic and security challenges of a country.

Many factors are involved in the relationship between age structure and development and their interaction can’t be fully disentangled. Although it is difficult to ascertain a direct causal relationship between age structure and development, however, there is considerable research that claims that countries with a Very Young and Youthful population have historically faced the greatest challenges to their development. But more importantly, age structures are dynamic. The Very Young countries are at the beginning of a demographic transition, with high mortality and fertility rates. At least two-thirds of their population is under age 30. Growing cohorts of young people in conjunction with competition for university seats and jobs; a weak or autocratic government; and declining natural resources generate an environment that ignites civil unrest rather than promote development. In the past three decades, countries with this Very Young age structure have been 2-4 times more likely to experience civil conflict than countries with Mature structures. It is also worth noting that only 13 percent of these countries have had fully democratic governments.

The Youthful countries have the demographic transition well within reach, even with political and economic challenges. Though fertility rates have declined, they are still well above two children per woman and could be as high as eight. Thus these countries are likely to experience continued population growth for the foreseeable future. In order to achieve a more balanced age structure, access to family planning and reproductive health programs must be widespread allowing women to fulfill their desired family size. Girls’ education is also critical as research shows that each year of girl’s education can reduce fertility by 10 percent. Additionally reducing inequalities in education and healthcare access among the poorest, by ensuring that corruption does not siphon away spending on social well-being is critical. Policy recommendations for countries with Very Young and Youthful age structures are similar and Pakistan with 67% of its population under 30 fits in the Very Young age structure.

: Country Based Statistics (according to age structures)

Possibly, the key age structure is Transitional with countries in the midst of a demographic transition. Assuming there are enough jobs, with a greater share of people working, governments are able to spend more per capita on social services and thus make great strides in developing a healthy, better educated, more technologically advanced and economically competitive population. But in order for this to happen, the right policies fully integrating women and youth have to be in place for healthcare, education and employment.

Countries with Mature age structures are at the end of the demographic transition. With good overall health, high life expectancy and low fertility rates, these countries are experiencing population aging to varying degrees and in many a decline in overall population. More than 80% of these countries have been full democracies. Additionally they have also been the most peaceful, stable, and wealthiest with only a small percentage 6% (Northern Ireland etc.) that have experienced civil conflict, though these countries have experienced slowdowns in economic growth. Coen observed that through liberal immigration policies most of these countries have been able to maintain the Immigrant-Mature age structure, thus supplementing their population with migrants. These crafty immigration policies have helped these countries to sustain working age populations for economic growth and reduced the stress on their social security systems.

In some countries, particularly in Africa age structures have changed because of AIDS, including reversal of the decline of death rates in the hardest-hit countries. 90% of fatalities associated with HIV infection occur among people of working age, with the largest concentration of death among the 25 to 39 year old. Economic impact has been pervasive and though greater availability of anti-retroviral drugs has lengthened life spans, mortality among working-age adults and high fertility rates have created an age structure heavily concentrated among children and adolescents, with fewer adults to care for them.

In some countries, particularly in Africa age structures have changed because of AIDS, including reversal of the decline of death rates in the hardest-hit countries. 90% of fatalities associated with HIV infection occur among people of working age, with the largest concentration of death among the 25 to 39 year old. Economic impact has been pervasive and though greater availability of anti-retroviral drugs has lengthened life spans, mortality among working-age adults and high fertility rates have created an age structure heavily concentrated among children and adolescents, with fewer adults to care for them.

“Over the 30-year period analyzed, 80 percent of all outbreaks of conflict occurred in Very Young or Youthful countries.”

Coen’s presentation also highlighted the environmental concerns of population growth and its spatial division. She defined 2008 as year of the urban; this was the first year when majority of world’s population lived in urban areas. She brought to the attention of the participants that nearly 3.5 billion people are concentrated on 3% of the planet’s land surface. Furthermore the urban population is projected to grow to 6.4 billion by 2050, 80% of which will be in developing countries. Therefore, it is imperative to understand the consequences of urbanization and population growth on Climate Change. She argued that though urbanized countries are in a better position to achieve low carbon intensity by adopting new energy technologies, relatively high urban growth rates in developing countries will increase their carbon emissions through increased energy use. Because most population growth is occurring in countries with low emissions per capita, the rise in population coupled with higher carbon emission per capita does not auger well. While accepting developed world’s responsibility for Climate Change, she argued that rapid population growth rate only increases the vulnerability of the developing world to Climate Change impacts.

In conclusion Dr. Coen argued that though population age structure has significant impact on a country’s stability, governance, economic development and social well-being,

still demography is not destiny. Pakistan has 67% of its population under 30 years of age but only 20% married women use contraceptives and 32% of married couples lack access to it. Room for change is tremendous but only government’s political commitment can influence age structures through policies that address the key demographic forces of fertility, mortality and migration. She left the audience with a note of caution stating that the State Failure Task Force’s (a consultative group of academics & statistical analysts) analysis from mid-1950s through the mid-1990s found high rates of infant mortality as the best single predictor of state failure. 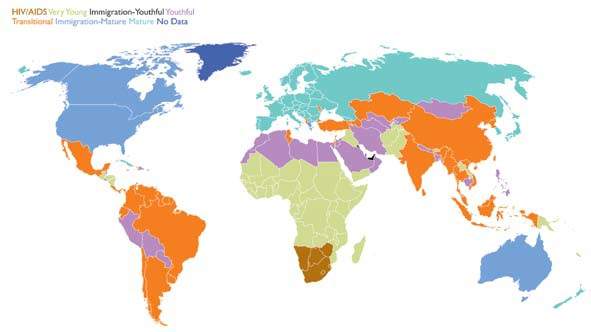