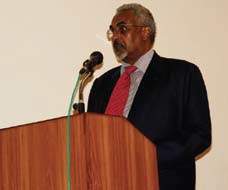 The session started with a general overview of food security in Pakistan. Dr. Chaudhry began by articulating that food and safe drinking water were first among the needs of human beings. Though Malthusian prediction of famines had not come to pass, the impact of increased population on the environment and food viability was severe. According to the 2007-08 Economic Survey, while a decline in GDP share of agriculture from 24% to 21% by itself was not a cause of concern, the implication of low agricultural productivity especially when population was projected to reach 295 million by 2050 only heightened food security concerns.

Dr. Rukanuddin defined Food Security as access of all people to food needed for a healthy life. This required food ‘Availability’ through adequate production and trade; ‘Accessibility’ to citizens at the remotest periphery; ‘Affordability’ for the poorest households irrespective of market prices; ‘Utilization’ to meet essential nutritional requirements and ‘Sustainability’ to manage all above listed requirements through demographic, economic and environmental changes. Dr. Ahmed stated that Pakistan’s food security policy was aimed at attaining and maintaining food self-sufficiency by making basic food grains (mainly wheat) available to all citizens at affordable prices.

It was pointed out that overall crop production, average yield, average per capita calorie intake and per capita availability of food items including wheat, rice, milk and meat had slightly increased over time; instead it was the deficiency in meeting overall food requirements of the population that had increased insecurity. During 1970-71, Pakistan’s food trade (including wheat, rice, edible oil, tea, pulses, fish & milk products, vegetables and fruits etc.) had a net-gain of nearly 50 million rupees, which changed to a net deficit of 4 billion rupees in 1985-86, further increasing to 20 billion rupees in 2006-07. Today, as a consequence of population increase, urbanization, change in consumption patterns and family structures, the national production of sugarcane has to increase by 1.4% while that of fruits and vegetables by 79.7% just to fulfill these items’ needs by 2015.

The discussion primarily was about wheat, the main staple crop whose production was 10% less than the 24 million required targets of 21.8 million tons (MT). While Punjab remained a wheat surplus province, all other provinces ran a deficit with even Sindh 1.35 MT short of its wheat requirements. The district level data showed further granularity with only 8 out of the 17 Sindh districts sufficient in wheat production while the rest were in deficit. The other main point highlighted was food inflation which increased poverty by 14% to 77 million, while citizens with serious food deficiency (1700 calories/day) went up from 35 million to 45 million, a 29% increase. This had led the poorest two quintiles to increase their share of income spending on atta (wheat) to around 70%.

In discussing the reasons for such drastic food insecurity in a country with the largest contiguous canal network in the world, Farooq mentioned a plethora of reasons including fluctuating wheat production. He argued that wheat support price should be fixed according to an informed process rather than an arbitrary political whim. 86% of all farmers owned less than 12.5 acres covering 48% of all cultivable area. These farmers did not produce any wheat surplus and thus a higher wheat support price only benefited large farmers at the expense of rural landless and the urban poor. Instead the presenters argued for subsidized inputs to improve the production function of all farmers. Dr. Rukanuddin further presented input price comparison between India and Pakistan to drill the point home. 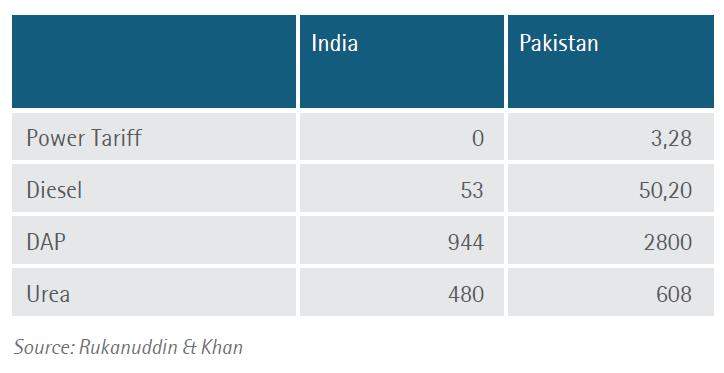 Concentrating on agricultural governance, Dr. Farooq argued for consistent planning through correct assessment of area under cultivation, measurement of yield per hectare and total production. He showed a static wheat yield graph spanning the last ten years. When compared with other countries, the wheat yield of Pakistan stood at 26 maunds/acre as compared to 28 for India and 43 for China. He articulated low genetic potential of varieties, slow varietals replacement of 12 years when worldwide average was 5, the lack of a seed marketing system especially of pulses and fodder crops, highly imbalanced use of inputs particularly fertilizer and inefficient food procurement & distribution systems as important governance issues. Giving an example, he submitted that wheat yield can be easily increased by 10% if certified seed was grown by all farmer compared to the current 30%.